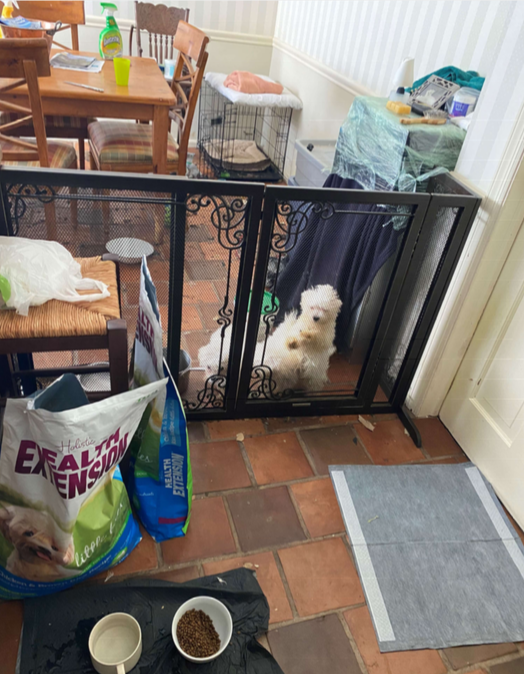 Inside the dogs' penned area in the kitchen at 151 Butler Lane. Connecticut Judicial Branch

Police on Saturday responded to a complaint of a landlord-tenant dispute at the Butler Lane home where the neglect of dogs, and subsequent deaths of three puppies, became part of a criminal investigation that led to felony criminal charges for a 48-year-old woman. 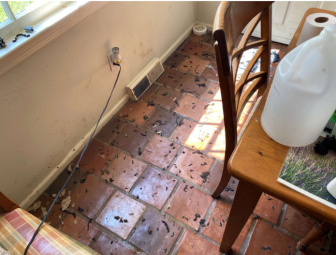 The dispute at 151 Butler Lane involved parking and locks on the doors, according to New Canaan Police.

Tenants at the “South of the Y” neighborhood home, whose testimony helped police secure an arrest warrant charging Catherine Palmer with three counts of cruelty to animals, also are central in an ongoing custody dispute for 12 seized dogs.

A state Superior Court judge on Dec. 7 granted the town of New Canaan temporary custody of the dogs. The next hearing in the town’s petition for full legal custody is scheduled for Jan. 8, Connecticut Judicial Branch records show.

New documents released at the time of the most recent hearing in the civil matter, on Dec. 18, include additional photos showing the feces-littered part of the Butler Lane kitchen where the dogs had been penned, as well as text messages between Palmer and her tenants on Aug. 12.

That was the Wednesday morning that police became aware of the neglect, when one of the tenants, Beth Mercurio, notified authorities.

“I have called animal control,” Mercurio writes in a text to Palmer at about 9:34 a.m. that day. “You better get here before they do. Your dog is barely breathing, barely conscious. This is inhumane and UNACCEPTABLE. You can speak to the officers in charge of the case if you need information. The animal control officer will follow up with your vet to ensure that the sick puppy received adequate care.” 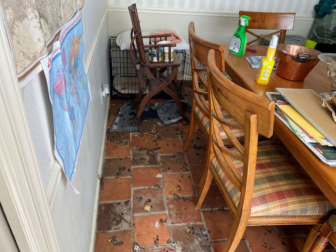 Palmer writes back, “crazy. the puppy is fine. had glycemia because she must have stopped eating. completely unnecessary for you to call animal control! your welcome for al of the help I’ve given you!”

Palmer then sees an Instagram video of the sick puppy posted by Mercurio and texts to her, “did you [expletive] on your Instagram!!! what the [expletive] Beth. get this removed now!!!!!” And she later threatens, “i’m calling attorney.”

Police launched an investigation into Palmer and the neglect of the dogs that day, and would learn weeks later that two puppies at the house died of parvovirus and that a third also died and was buried by one of the tenants in the backyard. 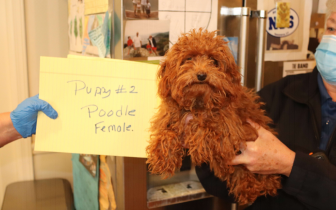 On that same morning of Aug. 12, when tenant Laurie Brown texted Palmer to say, “There is something wrong with one of the puppies I can get it to drink water but it is barely moving,” Palmer responded, “Ok can you please give it some of the pancake syrup on the desk in sunroom… Smear on her lips.”

It’s unclear whether Palmer or someone else was involved in the Dec. 19 dispute from the side of the owners of the Butler Lane home. Town assessor records list the owners as Beverly Piotrowski as trustee and Mark Palmer as conservator. He’s Catherine Palmer’s ex-husband. They divorced in 2015, court records show. 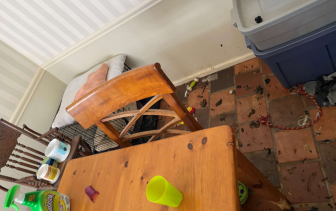 Police were able to secure a judge’s signature on an arrest warrant and on Nov. 17. seized the surviving animals from the house.

Palmer didn’t turn herself in on the warrant until Nov. 29. Police later discovered that she had left the state and traveled throughout New England with a car full of puppies, making deliveries to people who’d purchased them online. One of those puppies died after Palmer dropped the animal off, police said.

The surviving dogs currently are being cared for by the town, including at an animal shelter, the quality of which is at the center of a lively discussion in New Canaan. First Selectman Kevin Moynihan last week distanced himself from it.

Palmer is scheduled to appear Feb. 22 in the criminal case, Connecticut Judicial Branch records show. She doesn’t have a lawyer yet and hasn’t pleaded.

4 thoughts on “‘This Is Inhumane and Unacceptable’: Tenants’ Texts Added to Custody Fight for Surviving Dogs on Butler Lane”