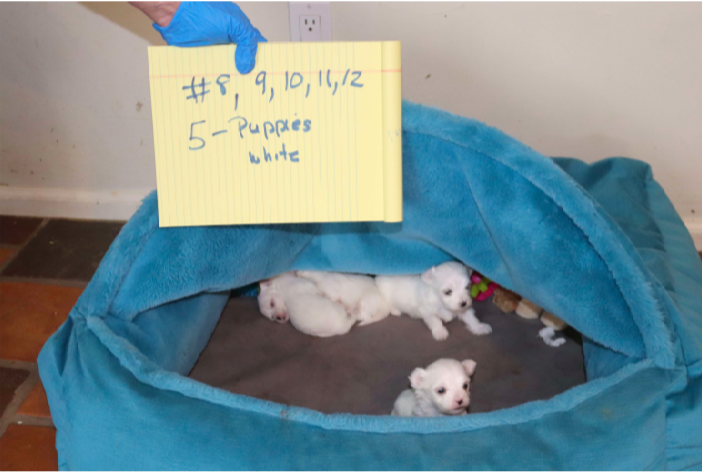 Evidence presented in a hearing of the town's petition for ownership of puppies found in Catherine Palmer's Butler Lane house included photos of the dogs. Here's one. Connecticut Judicial Branch website

Police say that prior to turning herself in Sunday on an active arrest warrant following the deaths of three puppies at her New Canaan home, Catherine Palmer traveled throughout the region with a vehicle full of puppies, making deliveries to people who’d purchased them.

One of those puppies died last weekend, according to police.

Palmer, 48, is accused of operating an illegal pet store, neglecting dogs and denying them access to medical care. Following a months-long investigation, police on Nov. 12 obtained a state Superior Court judge’s signature on a warrant charging her with three counts of felony cruelty to animals.

Yet Palmer could not immediately be found, and though police were able to seize 12 dogs found in a Butler Lane home (including 10 puppies), it would be 18 days before the warrant was served and she was arrested.

Police have since learned that she “was traveling around New England over the Thanksgiving weekend with a vehicle full of puppies making deliveries to individuals who had purchased the puppies,” according to a press release issued Friday by New Canaan Police Lt. Jason Ferraro.

“Multiple families have already come forward sharing their experiences,” the press release said. “One family received their puppy on November 25th at midnight, only to end up in the emergency room on November 26th with a puppy in critical condition. The puppy did not survive, this incident occurred in Massachusetts.”

It wasn’t immediately clear whether Palmer will face additional charges in Connecticut or Massachusetts, or whether she will face federal charges.

In selling the animals, she used names including “Cassie Palmer” and “Cassie Aris.”

The rescued dogs are being cared for by New Canaan Police and the town has petitioned to become the animals’ formal owner. The next hearing in the civil matter is scheduled for Tuesday. In New Canaan, the case has renewed a call for a more suitable animal shelter in which to house lost or seized animals.

Those with information related to Catherine Palmer and the sale of puppies are asked to contact the New Canaan Police Animal Control section at animalcontrol@newcanaanct.gov.

2 thoughts on “Police: Another Puppy Died after Palmer Made Thanksgiving Weekend Drop-Offs to Buyers ”