Another peacock is on the loose in New Canaan, officials say. 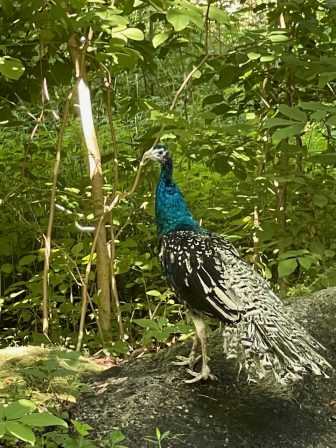 This peacock is on the loose on Ponus Ridge. Photo courtesy of NCPD Animal Control

The bird escaped from his enclosure and is staying in one area on Ponus Ridge, according to Animal Control Officer Allyson Halm. The peacock’s owner is organizing an effort to secure the bird, who has food and water available to him, she said. New Canaan has seen roaming peacocks in the past, most recently in April—in that case, the bird eventually was reunited with his owner.

Congratulations to Sean O’Neill of New Canaan on being named to the University of Scranton Spring 2021 Dean’s List. O’Neill is finance major in the University’s Kania School of Management.

Municipal officials planned Thursday to order a salon to close for failing to submit and pay its fees as others have as part of the public health inspection and relicensing process, New Canaan Health Director Jenn Eielson said during a regular meeting of the Health & Human Services Commission.

Weeks after Silvermine Road neighbors voiced traffic and safety concerns, an application to the Planning & Zoning Commission to convert a garage into a home office and medical examination area has been withdrawn, the appointed body’s chair said during a regular meeting Tuesday.

New Canaan Police contacted the owner of a wallet found around 8:51 p.m. Monday on Main Street downtown, and he picked it up from police headquarters, officials say.

This year’s Sidewalk Sale from the New Canaan Chamber of Commerce will be held on Saturday, July 17 on Elm and Forest Streets. 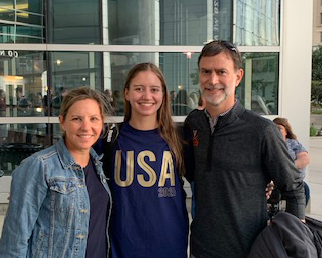 Congratulations to Kate Douglass, granddaughter of New Canaan’s Ed Vollmer, on securing a place on the 2021 U.S. Olympic Swimming Team in Tokyo. Her mother, Allison, grew up in New Canaan and lives in nearby Pelham Manor, N.Y. Douglass is a sophomore at the University of Virginia.

Catherine Palmer—arrested by New Canaan Police last year and charged with three counts of animal cruelty after authorities learned that three puppies died at her Butler Lane home due to neglect—last month had an application to the Greenwich Planning & Zoning Commission denied after two stop-work orders prevented her from blasting out a basement floor to make a “rec room” for her boys. Palmer, who also was charged by Norwalk Police in February for second-degree violation of conditions of release, has pleaded not guilty to the animal cruelty charges and is next scheduled to appear Aug. 20 in state Superior Court.

Here’s a parking ticket appeal submitted to the New Canaan Parking Commission by a town resident fined $25 on one 2 for overtime parking on Elm Street:  “I’d like to dispute this ticket since I went to move my car at 12:30 (time expected to be maxed) and a mail truck was blocking my vehicle + in my attempt to find the mail person I was not able to b/c he or she was not near sight. I went up to my office to a meeting and even after 15 min (picture taken from my window) mail truck was still blocking me. When I finished my meeting I went down & I already had a ticket. Please consider removing my fine as I feel it was out of my control to get the car moved within the time manner.”

Greenwich resident Ryan Fazio this week his candidacy for state Senate in the August special election to represent New Canaan, Stamford and Greenwich. 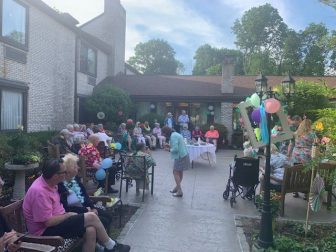 The Inn at Waveny celebrated the opening of its newly renovated patio with a Tiki Party on June 25. Contributed

Finally, The Inn at Waveny on June 25 celebrated the opening of its newly renovated patio with a tiki party. Residents, family members, staff and friends “had a wonderful time celebrating the new outdoor space with food, drinks, dancing and entertainment from Deuces Wild Entertainment,” organizers said. “Everyone was in a tropical state of mind and much fun was had by all.”