Robby Geriak of Joe’s Pizza is getting married. The date is fixed at April 11, 2015. Congrats to Robby (and many thanks to you and Larry for the great pizzas and service, see you soon). 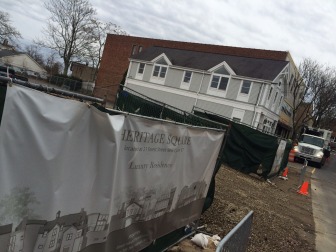 The mixed use development on Forest Street is to be called ‘Heritage Square,’ its sign says. Credit: Michael Dinan

The mixed-use commercial and residential development around the corner on Forest Street has a name, according to the signage hanging there: ‘Heritage Square.’

One of the grim responsibilities of the NCPD Animal Control unit is tracking and sometimes dispatching of injured deer, following motor vehicle accidents. On a recent morning, one such call was wrapped up by the police dispatcher rather succinctly: “Tag the stag.”

Complaints coming into the New Canaan Police Department’s Animal Control unit about the Irwin Park fox “chasing” them indicate to officials that someone is feeding the animal. “He’s just hanging around the walkway, knowing he will get food,” Officer Maryann Kleinschmitt said. Not a good idea. 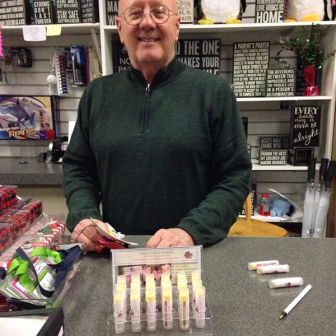 Jim at Mackenzie’s with the Orr family’s locally sourced and made lip balm, on sale. Contributed photo

Attorney Steve Finn has been before P&Z Commission Chair Laszlo Papp a lot this fall, as the lead representing the applicant of the 16 Cross St. development, among others. On Nov. 18, while arguing in favor of a separate project on Summer Street, Finn found himself slipping into litigation mode, saying to Papp: “It is my understanding, your honor—” before catching himself.

Police are unable to take action on a pair of recent school bus violations reported to them—typically when a motor vehicle passes a stopped school bus that already has its light flashing and stop sign extended—because it came in more than 10 days after the incident. Both happened around 10:45 a.m. on Nov. 10—around 152 Marvin Ridge Road and 168 Pocconock Trail.