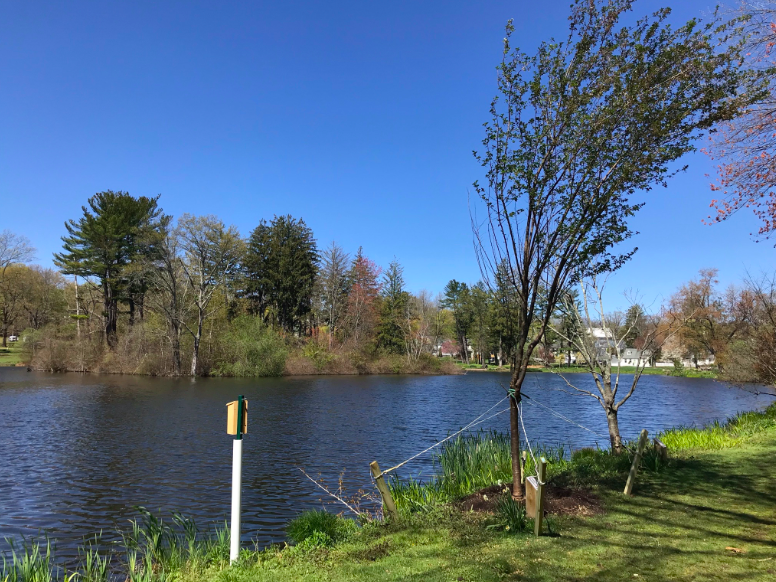 Town resident Jackie Alexander, a third-generation Japanese-American, had already been looking for a place in New Canaan where her organization could donate a cherry blossom tree when she heard last fall about a need at one of the town’s most important, if little-known, memorial sites. 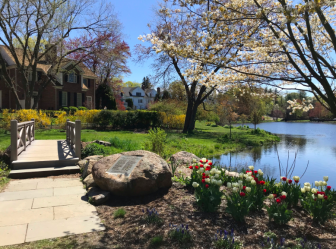 Established in 1945 and twice restored in the past 20 years thanks to Korean War veteran Jim Bach, among others, the “Gold Star Walk” at Mead Park is dedicated to the 38 New Canaan men who lost their lives while serving in the U.S. Armed Forces during World War II.

Alexander on learning that one of the Gold Star Walk trees was dying and needed to be replaced, brought the information back to the nonprofit organization where she serves as president—the Japan Society of Fairfield County, which promotes goodwill through mutual cultural understanding between the United States and Japan—and within months the cherry blossom tree donation was approved and accepted for the site.

“I’m excited about this, personally, because it’s in a time where we have a lot of protests and lot of things that we want to change, and this is something we can do to be kind and reach out and give back to our community,” said Alexander, a New Canaan resident since 1988 whose uncles served during World War II with the U.S. Army 442nd Infantry Regiment and whose father taught Japanese to U.S. soldiers.

The tree planting “is significant for the fact of where we are now—it [World War II] was a war against Japan, but goodwill and community are what we feel now.” 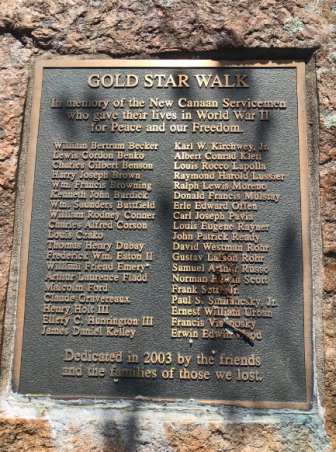 The plaque memorializing the 38 New Canaan men who died while serving in World War II, at the Gold Star Walk in Mead Park.

She added, ”To me it’s a positive message. I’m proud of being an American, I’m proud of being a New Canaan resident and I think what they have done in Mead Park is beautiful. I don’t think even the New Canaan community knows about the Gold Star Walk and what is happening at Mead Park. So to me this is giving back and coming together, for everybody.”

A dedication ceremony will be held at 12 p.m. on May 1, and those in attendance will include a representative from the Consul General of Japan in New York (Fairfield County is in its jurisdiction).

Running along the eastern and northern edges of Mead Pond, the Gold Star Walk is the centerpiece and focal point of improvements in recent years to what had been a relatively little-used area of the park. The memorial path itself and area between Mead Pond and Richmond Hill Road both have been cleared of overgrowth, while one footbridge that forms part of the Gold Star Walk has been replaced and a second one added. A new brick plaza has been installed in the footprint of the former Mead Park Brick Barn, with plantings from the New Canaan Beautification League and seating areas, and the town has already improved and plans to continue improving pedestrian access to the area so that the northern side of Mead Park has become a new, welcoming formal entrance to it.

Jim Bach at the April 23, 2021 bench dedication near the Gold Star Walk at Mead Park. The bench was dedicated to Jim and is late brother, Bill Bach. Photo courtesy of Meredith Bach

Last week, a bench in the new plaza was dedicated to brothers Bill and Jim Bach for their long service to the town.

That northern section of Mead is “an area of Mead Park that was sort of forgotten about, because it wasn’t a comfortable place to be,” Jim Bach said.

But “something has changed,” said Bach, a 1947 graduate of New Canaan High School who grew up playing and exploring at Mead Park. “There is an interest. There are people going to that area now. There are benches waiting for them. There are bridges to walk over.”

Asked for his thoughts on the Japan Society’s donation of a replacement tree, Bach said, “That’s terrific.” 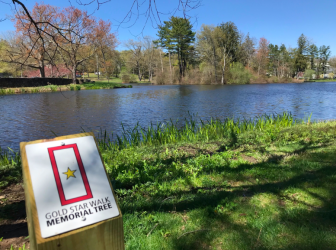 Each memorial tree planted as part of the Gold Star Walk has a stake marking it. Credit: Michael Dinan

“And inasmuch as it’s a Japanese group and so on, I was not in World War II—I missed that, thankfully, though I did go to Korea—but I have a feeling today for Asian people on a positive basis. In other words, I’m a history buff—I certainly know what happened between our countries at one time. But that’s behind me at this point. And I do not look upon any Japanese person or group as an adversary and I certainly put it aside at this point. If it’s one of the dead trees that is being replaced, then it’s all for the better and I approve of it.”

For Alexander, the tree planting is significant on two levels. First, cherry blossoms “are very important to Japan in their culture,” she said. 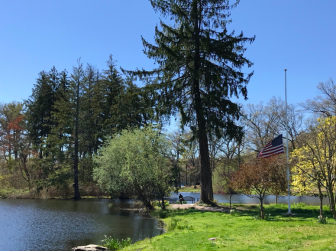 “They are fleeting by nature, it’s the emergence of spring and new things it’s been the symbol of life and renewal and peace and friendship,” she said, adding that “cherry blossoms have been the extension of neighborly community.”

The planting specifically on New Canaan’s World War II memorial path is especially significant “as New Canaan has had its history with World War II.”

“The highest percentage of townspeople, I understand, served in the military in World War II, a war against Japan, and there were 38 people who did not come back, who lost their lives and 38 trees to remember them, 38 different flowering trees,” she said. “That was created right in 1945 and then was recently renovated and once before, too, but some of threes have not lasted or are needing repair. That the Japan Society of Fairfield County can donate one, it’s very special.”

Click here for a photo gallery of the New Canaan men to whom the Gold Star Walk is dedicated.

6 thoughts on “‘Goodwill and Community Are What We Feel’: Newly Donated Cherry Blossom Planted as Part of Mead Park’s ‘Gold Star Walk’”