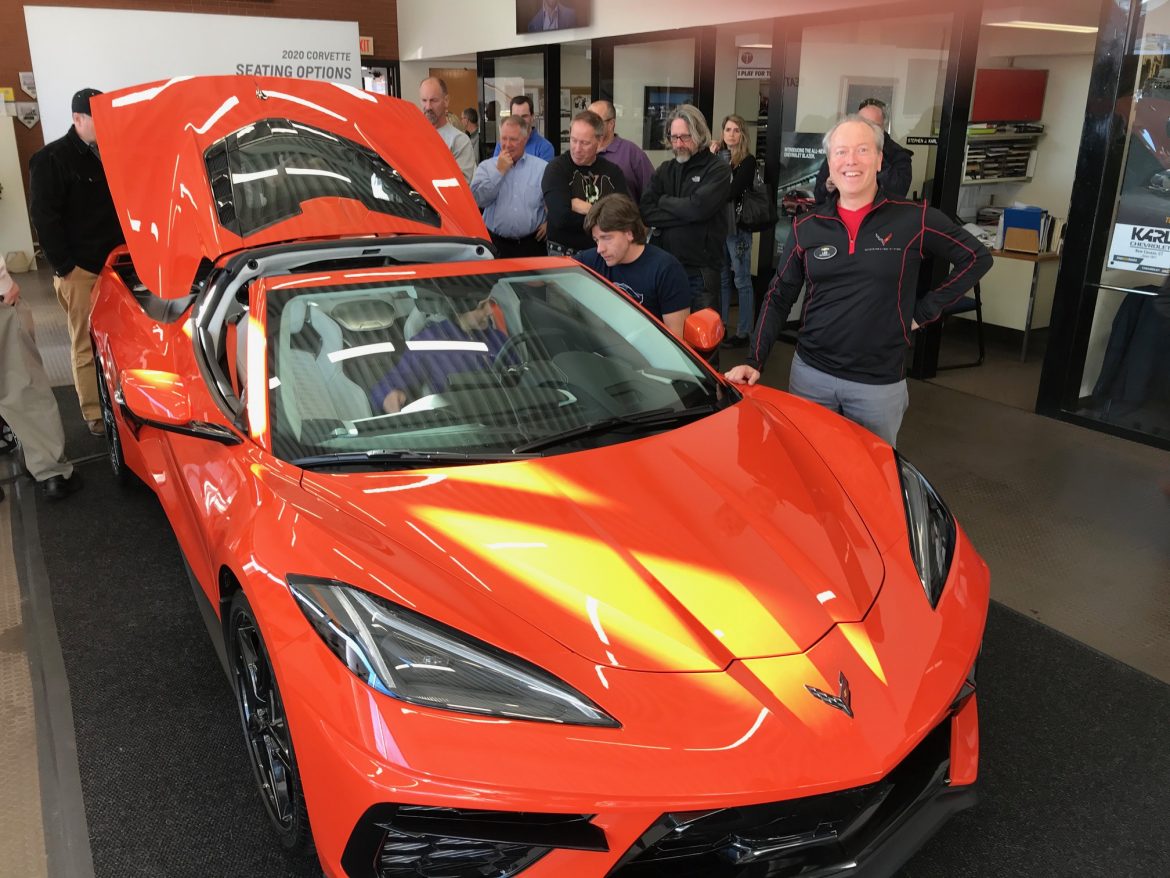 Hundreds of auto enthusiasts visited one of New Canaan’s best established local businesses Tuesday for a milestone unveiling of a new specialty car. 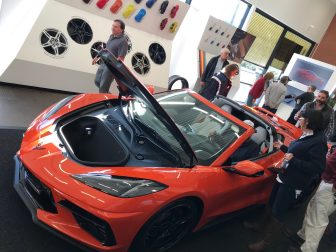 Supported by New Canaan businesses and designed to support local charities, the all-day unveiling at Karl Chevrolet of the 2020 Chevrolet Corvette Stingray marked the first time that people could see the American sports car in Connecticut.

“Everybody has been waiting for a mid-engine Corvette, including myself, and here it is,” Gary Trombly of East Granby said as dozens of people sat in and took photographs of an orange Stingray in Karl Chevy’s Elm Street showroom.

“Beautiful car,” he said. “It’s gorgeous. Well set up. The interior is a lot better than past ‘Vettes, which were all plastic. There is a lot of nice soft features inside. The seating is unbelievable. It’s comfortable as hell. You become part of the car.”

Karl Chevy President Leo Karl III said he was expecting some 500 to have come through the day to see the Stingray. 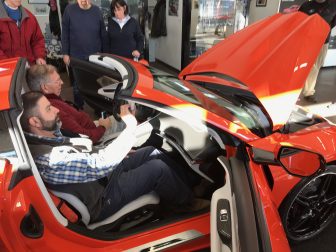 “Our team has had a lot of fun preparing for this, so it’s not your normal Tuesday in New Canaan,” he said. “And it’s been great that we have had a lot of folks come to New Canaan for the very first time. So through our email contact with them leading up to the event, we have tried to promote other businesses in town and we will do that after the event as well, because we have the Holiday Stroll coming up, we have the Explore New Canaan website that went live, I’ve had a lot of local support from local businesses. We’ve had food donated from Joe’s Pizza, from Gates. We are trying to raise some money, take the generosity of people’s spirit this Thanksgiving week and see if we can raise money for three of our local charities—Filling in the Blanks, the local Food Bank and Toys for Tots U.S. Marine Corps.”

People also can text ‘06840 Corvette’ to 44321 to arrive at a New Canaan Community Foundation link so that the giving is tax-deductible, Karl said. (Tuesday’s event runs through 7 p.m. and refreshments are available.)

Doug Zumbach, founder of the hugely popular Caffeine & Carburetors car show in New Canaan that started outside his eponymous coffee shop on Pine Street, helped get the word out about the Stingray unveiling with the C&C email distribution list.

“The new Corvette is right up there with the newest Ferraris, Lamborghinis, Porsches and most technologies in speed, acceleration, braking,” Zumbach said. “So it’s a milestone for the Chevrolet Corporation.”

Asked about the interest in specialty cars in the area, Zumbach said, “I think Fairfield and Westchester County have always been a major part of the collectible hobby, simply because of the affluence of the area, the rarity of the some o the cars that are locally known that are traded among people here. We have fantastic restoration shops in this area, which just helps the hobby along.”