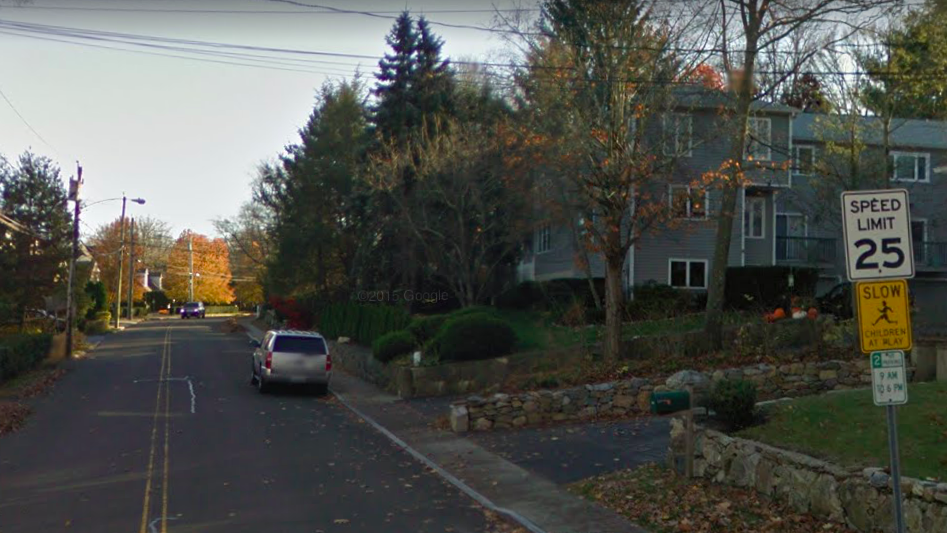 Looking down Forest Street in New Canaan in the area of 170 Forest St. A sign with the parking limit posted can be seen in the foreground. Streetview

Town officials this month voided two of three $25 parking tickets given to a Forest Street man who claimed he’s kept his car in the same on-street spot in front of his home for more than two years without a problem.

Joseph Morcerino of 170 Forest St. told members of the Parking Commission at their Nov. 1 meeting that he parked his car in its usual spot when he left for vacation Sept. 28 to Oct. 4.

“I took the redeye back and landed on the morning of Oct. 5,” Morcerino said during an appeal hearing before the Commission, held at Town Hall. “When the limo pulled in the driveway, I said, ‘Hold on a second, stop right here.’ And I noticed there were three tickets on my windshield, and I thought I died and went to the Twilight Zone. Like what’s going on here? Why do I got three tickets when I’ve been parking here for two-and-a-half years, and there’s no parking signs?”

A parking enforcement officer had issued $25 tickets for overtime parking on Oct. 2, 3 and 4.

Parking Manager Stacy Miltenberg said that if a car is seen and marked in a timed zone, it will be ticketed for going over time. The residential stretch of Forest Street, from Locust Avenue to Heritage Hill Road, allows on-street parking for two hours from 9 a.m. to 6 p.m.

Addressing MIltenberg during the meeting, Morcerino said, “I don’t mean to be a comic, but what did you have, blind parking meter maids for two-and-a-half years? I mean, c’mon.”

Miltenberg said that after operating with a person down for an extended period of time, the Parking Bureau got up to full staff only this past summer, enabling its enforcement officers to patrol the town appropriately.

Morcerino told the Commission that there’s no sign on his side of the street indicating an on-street parking limit, and offered photographic proof. Miltenberg noted that in some cases, motorists bring in photos that appear to be carefully framed to leave out critical information.

Commissioner Pam Crum noted during the group’s deliberations that Morcerino has been “getting away with parking there for some time for free.”

“And he knows the sign is there,” Crum said. “I bet the sign is right behind his driveway.”

Nevertheless, the Commission voted 2-2 to void two of Morcerino’s tickets (it is the group’s practice to void in case of a tie) and 3-1 to uphold just one of them. Chairman Keith Richey voted to void in each case, while Commissioners Crum and Peter Ogilvie voted to uphold. Commissioner Stuart Stringfellow cast the swing votes, including a last-second change-of-vote on the third ticket, from uphold to void. (Commissioner Chris Hering was absent.)

Richey asked Morcerino whether he was entitled to a parking space up at his own house on Forest Street, at the end of a shared driveway.

Morcerino said yes, but that when it’s windy and raining, “a lot of the big dead branches fall off and I’ve already broke my windshield.”

He added, “When I was gone, was when we had that little tornado? That would not have been a good time to be back there. Not that I knew it was coming.”

Morcerino said he often has parked his car on Forest Street and just left it there, choosing to walk to his place of work on South Avenue. Richey said that generally speaking, there’s no overnight parking allowed on any street in New Canaan.

Regarding the placement of parking signs on Forest Street, Miltenberg said a guideline from Public Works has been to place them every 100 to 125 feet.

Ogilvie asked Miltenberg why the parking enforcement officer all of the sudden appeared to be patrolling Forest Street.

She said, “We were down and now we are back on streets that we had neglected for a number of years and back to going up and down those streets. In the past we would go down them and if there were complaints, go down them more often, but we would not be able to go down all time because there was not enough time. Now we back to a full staff and we are able to patrol areas a lot more effectively.”