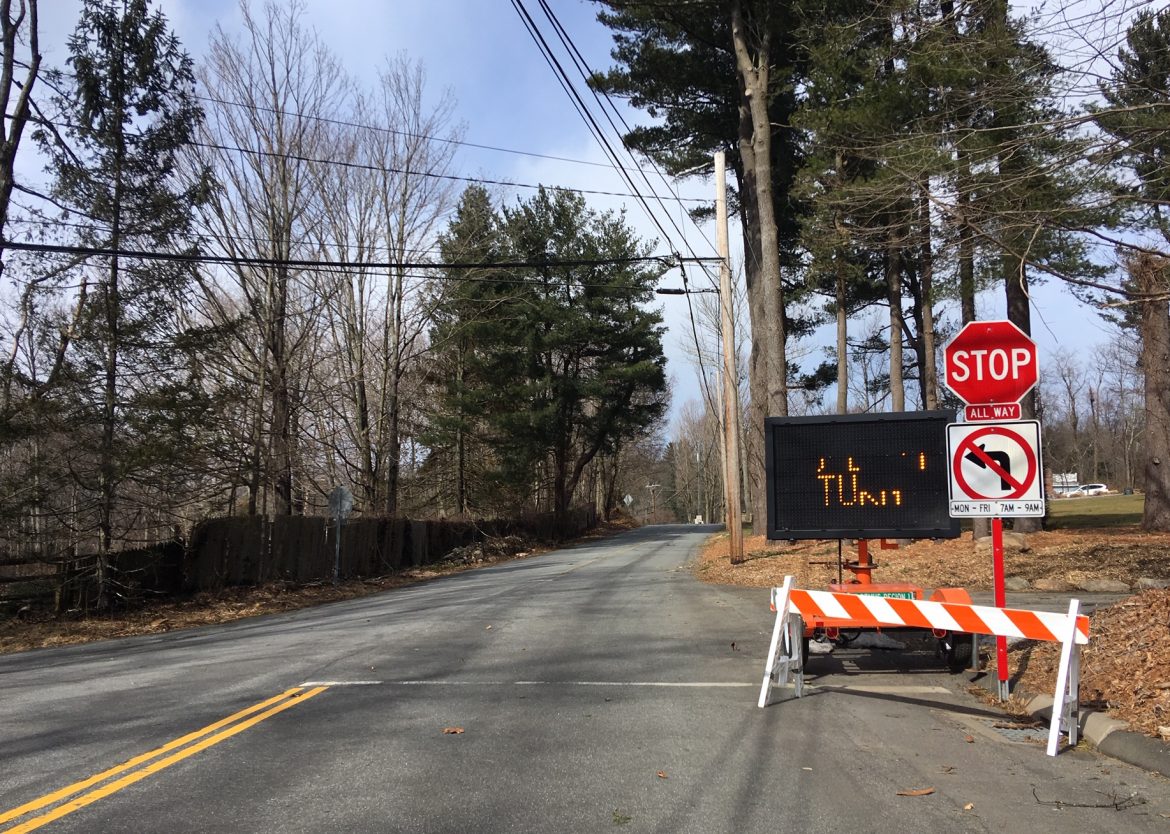 As of Feb. 18, a "No Left Turn" sign for the hours 7 to 9 a.m. faces northbound motorists at the intersection of Marvin Ridge and Nursery Roads. Credit: Michael Dinan

Back from spring break last week, Sarah Haddad watched from her Marvin Ridge Road driveway on three straight mornings as 12, 20 and 17 cars made U-turns there between 8 and 9 a.m.

She watched other motorists drive slowly and make U-turns in other people’s driveways, all so that they could turn right onto Nursery Road because, following recent decision by town officials, it’s no longer legal to make a left Nursery during the morning rush.

“Not only do I really not like having my private driveway that I maintain, that I plow, that my children stand at the top of for their bus stops every morning, being used by people to turn around,” Haddad told members of the Police Commission during their Feb. 27 meeting.

She added: “I just don’t think it is solving the problem. I think it is just going to still send people on Nursery. They know this route. It’s not people who are clueless, they know what they are doing. And they can very quickly figure out how to do the U-turn and get back on their way. I applaud your creativity, but I just do not think it solved the problem.”

Haddad’s comments came after the Commission—faced with problems caused by surging commuter traffic on Nursery Road from motorists seeking to avoid the backed-up Merritt Parkway—voted unanimously to install a “No Left Turn” sign at the intersection of Nursery and Marvin Ridge Roads on a trial basis. The sign prohibits northbound vehicles from turning left onto Nursery from 7 to 9 a.m. on weekdays.

Haddad was one of more than 30 people who packed into the training room at the New Canaan Police Department for the Commission’s regular meeting. The crowd was composed not only New Canaan residents affected by the change—including some from Nursery Road who say their own situation has improved—but also citizens of Norwalk, such as Tom Livingston, president of the city’s legislative body, the Common Council.

Saying he represented people from West Norwalk, Livingston urged the Commission to “reconsider your action here.”

“As you can hear, it is having a big effect and it will have a big ongoing effect on the citizens of Norwalk. And it seems to me after speaking to representatives of our police department, that they were not consulted about this, nor was anyone on the city side consulted about your action. In my mind it’s kind of like you have flooding on your property and you just decide to move the water off to the neighbor without thinking of us. I understand why you are doing this. It makes sense. I do believe that this is a real problem, this is a problem for both of us, and I think we should work together. I don’t think we want to set up a situation where it’s going to be us versus them, tit for tat. I certainly don’t want to go that route. I’m not threatening it, mind you. But I think this is sort of being really bad neighbors, and I don’t think that’s really conducive to getting anything done.”

New Canaan Police Deputy Chief John DiFederico said that the department has an open line with Norwalk Police, that the agencies frequently conduct joint enforcement, and that if the Commission wishes it, he’d be happy to reach out, share data and collaborate on a solution.

Commission Chairman Sperry DeCew said the two police departments would coordinate on “further traffic studies and traffic flows.” DeCew and Commissioner Jim McLaughlin also indicated that they would be OK reversing course on the sign if a month’s worth of data showed that it was creating traffic problems elsewhere, though Commissioner Paul Foley called for a longer test period (more on that below).

Members of the Commission told the Norwalk attendees that they never discussed the impact that installing the “No Left Turn” sign would have on the city.

However, in a Dec. 14 report (found in full as a PDF below), an engineer that the town hired for $7,000 to conduct a professional study on the problem of Nursery Road traffic did conclude that a “no left turn” sign “would have the same negative impact to the residential roadways in New Canaan or potentially to the south in Norwalk.”

Saying the data from Nursery Road does not support the idea that there’s a safety problem there, the traffic engineer—Michael Galante of Frederick P. Clark Associates, a Fairfield-based planning consulting firm—concluded that New Canaan should avoid installing the sign and “maintain traffic flow without any closures and maintain traffic flow without any turn restrictions.”

Galante recommended that cutting back on vegetation on targeted parts of the residential street as well as increased police presence could address safety hazards.

Though the command staff of the New Canaan Police Department spoke in favor of adopting Galante’s recommendations, the Commission during its January meeting voted 3-0 to install “No Left Turn” signs at both ends of Nursery Road (the appointed body voted unanimously last week to forgo installing a second sign at the White Oak Shade Road intersection).

Others from New Canaan and Norwalk who spoke out against the “No Left Turn” sign said that high traffic is a given in the New York City metropolitan area, that a long-term strategy must be developed to address problems caused by navigation apps such as Waze that direct motorists off of highways and into residential neighborhoods, and that New Canaan’s trial solution is exacerbating traffic problems elsewhere, including at bus stops for New Canaan Country School in Norwalk.

Doug Raymond of Gray Squirrel Drive in New Canaan said he struggled to understand why the town decided to go against a professional study “that was done, and the study said not to do anything.”

“Yet you spent money to do the study but disregarded the study,” Raymond said. “So I’m trying to understand why that study was disregarded and now we are all sitting here trying to figure out a solution to a problem which as a New Canaan resident who pays taxes, I would like to use New Canaan roads, OK?”

He added, “I am going to be hard pressed to find someone to buy my house who wants to commute to the train station or go to the Merritt Parkway or do something between the hours of 7 and 9 o’clock if they cannot make a left-hand turn.”

One resident of Nursery Road who had been a leading voice in pushing for the “No Left Turn” sign, Charlein Megherby, called for those in attendance to give the changes more time to take hold. Megherby said that although Waze has already been notified about the sign and made changes to its navigational routes, Google Maps is still sending people toward Nursery Road.

“I know that it’s crazy right now, but once Google knows, once Waze knows, they will stop sending people there,” she said. “And people who have learned the shortcut realize that they would have to go all the way across Marvin Ridge, which is more, and then go south, they are not going to save any time. So I just want to say that we want us all to have our safe streets.”

First Selectman Kevin Moynihan, who had advocated for the sign, called for greater enforcement of the new rule in order to change the habits of daily commuters who are accustomed to turning left onto Nursery Road.

“I think it deserves more study,” he said. “I do think we need some initial enforcement to break the habits of those who are regulars.”

Moynihan added, “Both towns need to study the issue. I do think it has had some impact so far in New Canaan. But the goal was not to disrupt others. It was to try to permanently teach people you cannot save five minutes or 10 minutes by getting off of exit 38.”

Asked by DeCew whether regular police enforcement of the “No Left Turn” sign was realistic, DiFederico said that NCPD doesn’ have the resources to dedicate officers there from 7 to 9 a.m. every day to stop every car.

“What I can do is pay attention to that area during those times,” DiFederico said. He gave an example of an officer who made a stop there at 8:17 a.m. on Feb. 27 and came to find that driver had no license. By the time a tow truck came to collect the car, 36 minutes had passed and it was almost 9 a.m.

It isn’t clear how long the Police Commission will keep the “No Left Turn” sign in place, though members of the body said they wanted to get a critical mass of traffic data prior to deciding whether to end the trial. (Given that speed sentries are battery-powered and limited in number, DiFederico said it would take up to three months in order to collect four weeks’ worth of data.)

McLaughlin noted that the trial period was to be for up to six months and could be shorter.

“I would like to see at least a month’s worth of data, maybe more, to see what is happening,” McLaughlin said.

DeCew said he would be “willing to go along with a study or at least one month to get real traffic counts.”

Foley said that he wanted to stick to a period of six months so that the trial would account for different seasons, holidays and vacation periods.

“I think we should keep the sign at Nursery Road and Marvin Ridge Road until we get a few more months into it,” Foley said.

3 thoughts on “‘I Just Don’t Think It Is Solving the Problem’: Concern That Sign at Nursery Road Is Creating Traffic Problems Elsewhere”