The Parking Commission at its most recent meeting voted 3-2 to void a ticket issued to a New Canaan woman who had parked in a loading zone on Main Street. 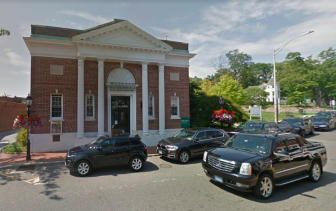 Motorists are parking in the area in front of Thali before 11 a.m., when it’s a loading zone every day except Sunday.

Elizabeth Zea told the commissioners that when she parked in front of the former Thali building around 9 a.m. on a Saturday in June to get her hair colored, she didn’t see a sign designating the area as a loading zone from 7 to 11 a.m.

“I was gone for about 90 minutes and when I came back I got a ticket and thought, ‘What did I do?’ ” Zea told the Police Commission at its regular meeting, held July 12 at Town Hall.

The only signs Zea saw were for two-hour parking from 11 a.m. to 6 p.m., she said, and what she eventually discovered to be the loading zone sign was hidden behind a hanging basket.

Zea said that she liked flowers but “I really didn’t see the ‘No Parking’ ” designation.

Since that specific loading zone has come up a few times at recent meetings of the Commission, the panel spent some time reviewing the history of its designation. Parking Manager Stacy Miltenberg, a guest at the meeting, told the group that the Police Commission more than two years before had created the loading zone, in part, to offer an alternative to delivery trucks that were parking illegally at the top of East Avenue.

Richey asked Miltenberg how often the loading zone in front of the former Thali building is used.

“We do not see a lot of people,” Miltenberg said, citing information supplied by parking enforcement officers.

“It’s a question that keeps coming up. They do not see it used as a loading zone at all. My officers say that most trucks are coming north on Main Street, so they cannot make that turn. They are very rarely coming south.”

Zea said that it makes more sense to have the loading zone designation on weekdays only.

“From a driver person in town, my sense, I am not paying great attention—it’s Saturday morning, it’s two hours, I’m good to go,” she said.

Richey noted that the loading zone keeps coming up to the Parking Commission and said he himself didn’t realize he couldn’t park there until 11 a.m.

MIltenberg said that the town could put up another sign for motorists but that “we cannot ‘line it out’ because it becomes a two-hour zone” after 11 a.m.

Commissioner Peter Ogilvie said the entire discussion is outside the purview of the Parking Commission, which is responsible for enforcing the on-street parking rules, not creating them.

During deliberations, Ogilvie said: “There is an old adage: ‘Ignorance is no excuse under the law.’ ”

Commissioner Pam Crum said “it’s very clear” on the signage there that it’s a loading zone at certain times.

“It says ‘no parking’ and it says ‘loading zone’ and it gives the exact time and then underneath it says when the regular parking time starts and the loading zone ends,” Crum said.

Ultimately, Ogilvie and Crum both voted to uphold the ticket, while Richey and Commissioners Chris Hering and Stuart Stringfellow voted to void it.

Ogilvie said after the vote, “There we are: Ignorance is an excuse under the law.”