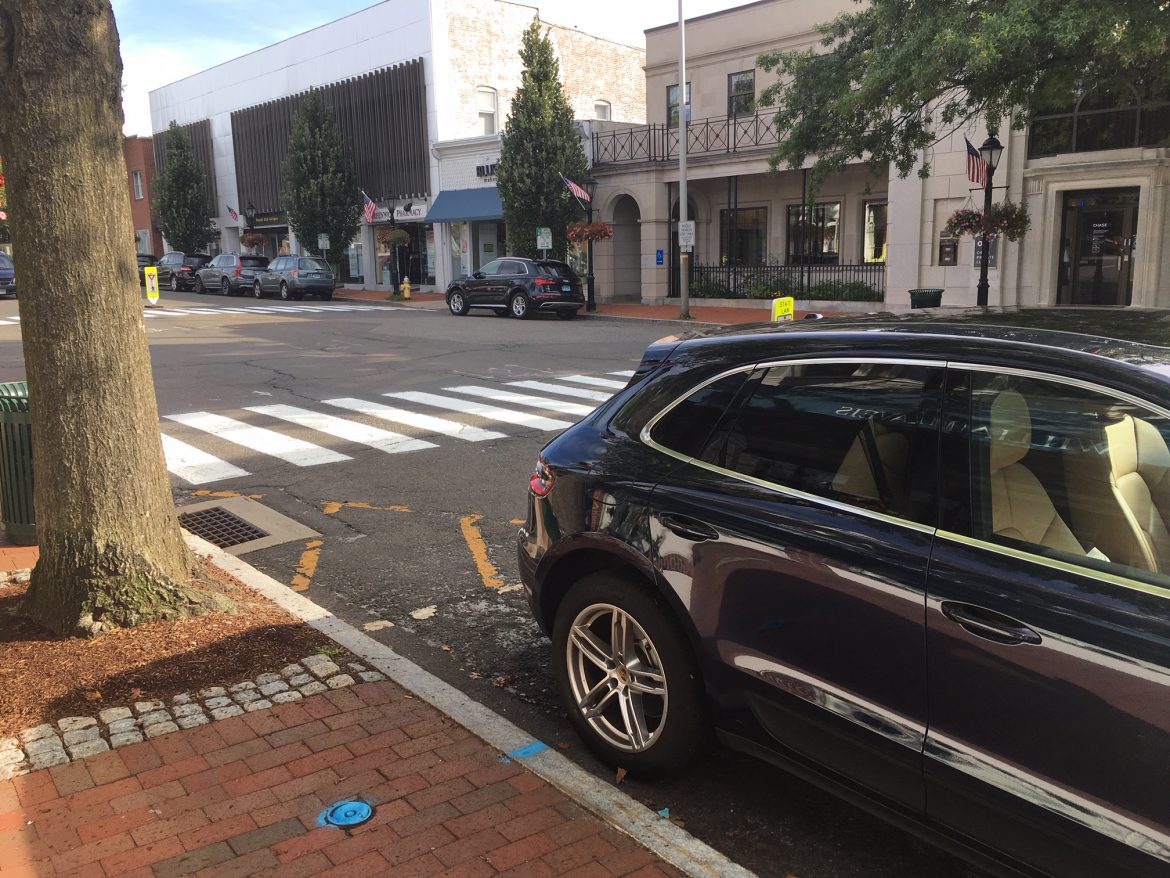 New Canaan stands to lose some of the parking around the crosswalks at Main and Elm Streets. Credit: Terry Dinan 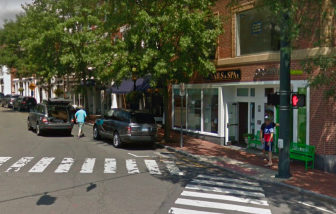 Main Street running north from Cherry doubles as state Routes 106 and 124, and four crosswalks along that stretch would be affected, officials said—two at Elm and two at East Avenue. If nothing changes, New Canaan would lose some 12 parking spaces, though Department of Public Works Director Tiger Mann when asked about the situation said it’s possible the town could eliminate one crosswalk at each intersection in order to preserve some of that parking.

Officials in the Connecticut Department of Transportation are seeking “immediate compliance” with the 1949 state law, according to Mann. A Fairfield-based transportation consultant was summoned to study the area and put together a proposal that may include a recommendation to eliminate the northern crosswalks at each intersection, Mann said.

The consultant, Michael Galante of Frederick P. Clark Associates, is “doing his best to research and come up with a plan, and then we will come back to the DOT with a plan for the area and see if they will accept it,” Mann said.

Last summer, a town resident put New Canaan on formal notice about its noncompliance with the statute, prompting the Police Commission to reconfigure parking on Elm Street such that 13 spaces were lost.

This time, the complaint went straight to the DOT in a phone call, according to Kevin Nursick of the state agency’s Office of Communications.

Asked about the identity of the complainant, Nursick said he recalled only that it was a male who cited safety concerns and pointed to Google Maps images.

Asked how pervasive the problem of noncompliance with the 25-foot rule is in Connecticut, Nursick said, “This is not a pervasive problem, based on my experience. It’s the first time it has been brought to my attention by a member of the public in 15 years.”

Nursick added that state officials do not have jurisdiction over town roads, though the statute would apply equally to each.

According to Mann, if a crosswalk is eliminated, its striping in the road will be removed, as well as the ramp up onto the sidewalk and any associated pedestrian signal box.

Essentially, if New Canaan opts to eliminate one of the Main Street crosswalks at Elm and one at East Avenue, pedestrians would lose one option of crossing at those intersections, Mann said.

Todd Ingarra, the DOT engineer who came to New Canaan to review the situation Mann said in a follow-up email that “It is the State’s desire to remove these spaces as soon as possible.”

“Temporarily, if New Canaan public works can put traffic cones out to define the 25’ no parking zone, that would be great,” Ingarra said in the email, obtained by NewCanaanite.com.