In considering a dramatic proposal to create up to 123 condos and apartments in an area at the edge of downtown New Canaan where 38 now exist, the town should find out how such a project would impact other property values, officials said Tuesday. 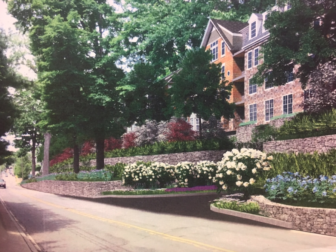 A rendering that looks at the proposed Merritt Village complex from Park Street.

Filed this month on behalf of M2 Partners, which owns a combined 3.29-acre parcel fronting Maple and Park Streets—and viewable here on the town website through a dropdown menu—plans for ‘Merritt Village’ call for four 4-floor multi-family dwellings that will include 60 townhouse-style condos and 62 midrise apartment units.

According to Planning & Zoning Commission member Tony Shizari, a question central to the project’s merit is: “What will be the impact on the market of introducing several hundred thousand square feet of additional living space?” 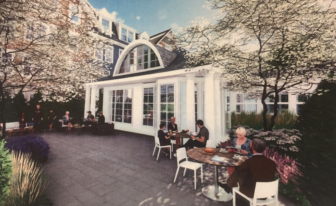 “The question goes to the impact on property values,” Shizari said during a regular meeting of P&Z, held at Town Hall.

“There are a lot of condos there—although I totally agree that we need single-floor access … But adding 90 units to what is allowable right now, what does that do to that surrounding area? Because that’s a lot of condos right there. What does it do to the property values?” 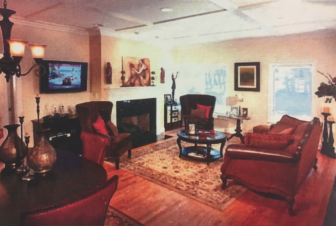 A rendering of the interior at a proposed Merritt Village apartment and condo complex in New Canaan.

The comments came during first public hearing on the project. Dozens of neighbors and other New Canaanites packed into the Town Meeting Room during a lengthy hearing that featured both dramatic new details of the project itself—introduced by the project’s architect, Glastonbury-based S/L/A/M Collaborative and shown through models and digital renderings of before-and-after streetscapes, interior layouts—as well as pointed concerns expressed by a handful of immediate neighbors (see below).

New Canaan’s Arnold Karp, a principal of M2 Partners, said that though there are “certainly smaller units” in New Canaan such as auxiliary apartments, “most of New Canaan is completely sold out of rental apartments.” 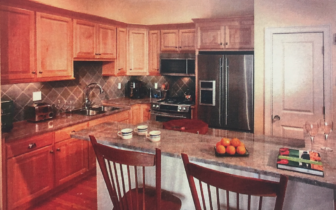 A rendering of the interior at a proposed Merritt Village apartment and condo complex in New Canaan.

“We do not have anything that has been on the market that is newer than 12 to 14 years old,” Karp said.

The concept for Merritt Village has been more than one year in the making and “in that time we have spoken to members of the chamber, people who are active in Staying Put, some merchants, certainly a number of residents—and that is how we came to the number of rentals and condos.”

“What we heard time and time again in New Canaan, and it is proven out by the numbers: Nobody has built this type of unit, and that is part of what requires the density that we are asking for. As our population ages, nobody wants stairs, necessarily. Most of the condos and rental units that have been built in New Canaan over the last 20 or 30 years have numerous stairs, certainly going at least from the first floor to the second. There are quite a few people who own and rent, as we did our homework, and they were actually using the living room on the first floor as their bedroom.” 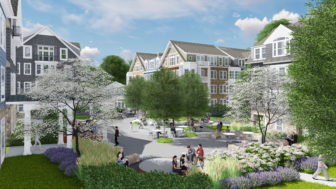 Karp added that although the current Merritt Apartments development does include some families with kids in the public schools, Merritt Village is not expected to appeal to residents with school-age children.

Designed and filed June 1 on behalf of property’s owners by attorney Steve Finn of Stamford-based Wofsey Rosen Kweskin & Kuriansky LLP, the project seeks to pull the new structures themselves further from the road than the existing ones sit, adding layers of new landscaping and carving out room for a new sidewalk on the east side of Park Street, putting nearly all parking underground and featuring an “open space” plan that includes a pedestrian walkway through the heart of the property between Mead and Maple Streets, according to its advocates. 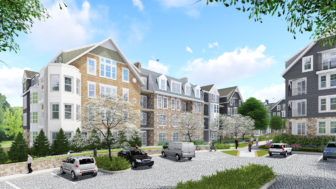 It meets several goals of the Plan of Conservation & Development, they say, and in its density requires a different set of regulations than the existing Apartment Zone allows. For that reason, the application also includes a recommended “Pedestrian Oriented Multifamily Zone” designed to “broaden the housing opportunities in and near downtown,” according to the application.

P&Z commissioners (except Secretary Jean Grzelecki, who recused herself as a neighbor) asked how many of the proposed 123 units are “senior-friendly” (all of them), whether there would be just one entrance into a proposed parking garage from Park Street (yes, though there are two underground garages, one beneath buildings identified as A and B on the site plan, another for C and D), whether the pedestrian path represents an easement for the town (no though it will be walk-able for the public and traversable for emergency vehicles), whether consideration has been given to the small cemetery (yes, in fact a burial ground consultant has been hired and the area will be restored and protected), whether any of the planned units will help New Canaan meet the state’s affordable housing requirement (no, though eight rental units will be set aside at below-market rates for what Karp called ‘workforce housing’), whether there’s a security plan for the development (plans include key fobs and swipe-able security cards or something similar), what happens to current residents during construction (they go elsewhere—nobody wants to phase it so that they’re living on a construction site) and how long construction is expected to take (about two years). 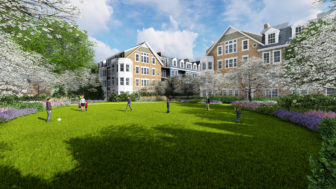 Neighbors expressed concerns about traffic, the style of the proposed buildings and how the project could affect the town’s scale and aesthetic, as well as about lighting, including car lights potentially flashing into nearby Park Street homes from a proposed parking garage built into a hill, increased traffic on already busy streets, the pressure that so many new residents to the neighborhood could put on parking and social interactions, trash collection and the loom of such tall buildings over major motor vehicle gateways into town.

Anthony J. Saggese Jr., representing the Park Slope condominiums on the west side of Park Street, called the project a “threat to the health and safety of the neighborhood, particularly street crossing, parking, noise and air pollution.”

“The basis of their request is when they talk about it is easy walking distance to downtown for needed patronage for local stores, shops, restaurants and the movie theater. If that is the sole goal of this town, why don’t we just put up a Trump Tower in town and that will really accomplish this goal? The basis of the request, if you listen to it, to change our town’s rules and regulations is pure fluff based on speculation and self-serving assumptions of the facts.”

In comments that drew applause from several in the room, Saggese said some parts of the POCD do not support a project of Merritt Village’s magnitude, citing “New Canaan is not looking for growth for the sake of growth” among other sections, adding that the town is not seeking to emulate Darien, Greenwich or Westport and that “there is no inordinate burden” on the applicant that would justify text changes to the zoning regulations.

Mary Gironde of Maple Street said she lives about 25 feet from a proposed four-story building that is more than 50 feet high.

“I have looked around the town and there are some tall houses, but nothing is over three stories,” she told P&Z. “There may be one building on their site that is four stories but I am sure that it is not as tall as what is proposed.”

Gironde said that although she may walk over from her home to Starbucks to get coffee, “I do drive to the Acme, I drive to the Post Office, I drive everywhere in New Canaan because it’s easier.”

“It is a dream to think that, ‘Yes I can walk everywhere,’ and I could, but there are lots of times that I am in a hurry or during the day I might drive somewhere in New Canaan three times,” she said.

Gironde added that noise levels already are high with police and ambulances traveling past the neighborhood, and that bringing in so many more people will only amplify it.

“I don’t think a lot of seniors are going to like that noise,” she said.

Saggese and others voiced additional concerns about traffic, noting that entrances and exists for residents as well as vehicles for businesses that would serve the property are designed to come off of Park and Maple Streets only.

The consultant who supplied the applicant’s traffic study (it can be found here)—Michael Galante of Fairfield-based Frederick P. Clark Associates—said the upshot of his analysis was that “there is a not a need for mitigation from this development.”

“There is no need to change traffic control” on Park or other neighborhood streets as a result of Merritt Village, he said, beyond simple items such as a stop sign facing motorists exiting the development and, on Maple Street, a sign instructing them not to turn right (the wrong way on that one-way street).

P&Z Commission Chairman John Goodwin called for a third-party traffic expert to look at Galante’s findings and for the applicant to hire a parking engineer as well as whatever type of consultant is needed to address the question of how Merritt Village’s creation would affect other property values in town.

Here’s a look at how some standards of the proposed new zone compare to the current Apartment Zone: