Leroy Avenue under the railroad bridge will be closed from 9 a.m. to 4 p.m. this Tuesday, Aug. 18 and Wednesday, Aug. 19, the Darien Department of Public Works has announced.

The section from West Avenue to Bailey Avenue will be closed, according to the announcement.

The announced closure times differ in details from a discussion police officials held with the town Police Commission last June.

Original headline: Part of Leroy Ave to Close for 5 Days (Not Nights) in Mid-August

Extending a natural gas main under the railroad bridge at Leroy Avenue downtown will close that part of the street during the day for five days in August, police officials say. 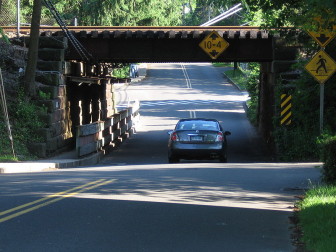 The planned project to extend the gas line along Leroy Avenue and on West Avenue will start earlier than mid-August and continue well after it, but the daytime road closure is necessary to install the line under the railroad overpass, Darien Police Lt. Don Anderson told the Police Commission on Monday.

At night, a metal plate will go over the excavation under the roadway and vehicles will be allowed to use all of the road, Anderson said. The commission, acting in its capacity of the town’s Legal Traffic Authority, approved blocking the road, subject to Anderson’s approval of a traffic plan submitted by the utility.

The exact days haven’t been worked out yet with Eversource (the utility company that bought out Yankee Gas, along with Connecticut Light & Power).

The gas line, hooking up to an existing gas pipe under the Post Road, will eventually be installed along part of West Avenue in the direction of Noroton Avenue, Anderson said. Town officials hope to get the gas line as far as the commercial center of Noroton Heights, he said.

A 16-unit apartment building going up on the corner of Leroy and West avenues is also expected to be served by the gas line, Anderson said.