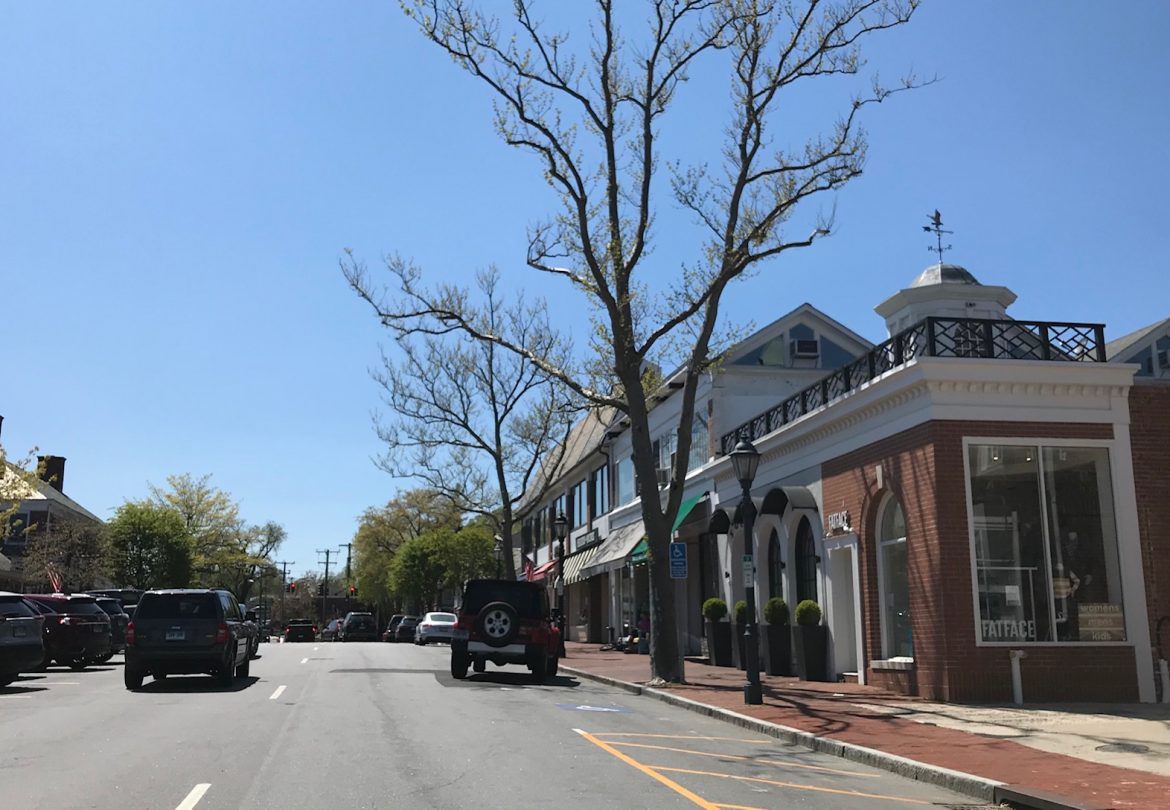 As New Canaan prepares to see some businesses start to reopen later this week, and for restaurants to start offering restricted outdoor dining in addition to take-out and pickup, the town’s highest elected official is urging anyone visiting the downtown to wear protective masks at all times.

The business district “is a necessarily congested area, so we really have to have the rule,” according to First Selectman Kevin Moynihan.

“That when you are downtown, on any street downtown—that’s Pine Street, Forest Street—you should be wearing a mask. And I say ‘should’ not because it’s not optional but but because we expect you to. And the respectful thing for your fellow citizens is to protect them as they are protecting you. And unfortunately the expectation is we are going to wear masks through the summer and perhaps into the fall, especially to avoid a recurrence.”

The comments came during the “Annual First Selectman’s Report To The Business Community,” organized and hosted by the New Canaan Chamber of Commerce. Held via videoconference this year due to the COVID-19 public health emergency, the meeting featured an introduction by Chamber Executive Director Tucker Murphy and information from Moynihan, including a Q&A with business owners on the webinar.

The event came as New Canaan prepares—after Wednesday, as per Gov. Ned Lamont’s order—to see offices, restaurants and non-essential retail reopen with restrictions that include wearing masks and social distancing. The town also has approved reconfigured pedestrian walkways in some areas of the downtown in order to allow restaurants to “bump out” onto the sidewalk so that they can have more outdoor space and also allow for six feet between tables.

With respect to dining out, when it’s necessary to remove a mask in order to eat, Moynihan said that it’s “going to be a personal decision as to what level of risk people are willing to take.”

“Obviously the restaurants will do a great job in terms of abiding by the protocols to keep their staffs safe and keep their customers safe,” he said. “But this virus remains very serious. It is highly transmittable.”

He added, “It is possible to be positive, infected, and not have any symptoms. And that is the category of people that is particularly worrisome … That is why it is so important right now to wear a mask when you cannot remain socially distanced. Because the virus is still around and we need to control as much as possible the transmission and we can only do that by having everyone do the common sense thing. Stay apart.”

It’s been more than two months since health and safety officials closed a wide range of businesses in order to minimize the risk of transmission of coronavirus disease, and restaurants began adapting by focusing on delivery and takeout exclusively. As of late Monday, New Canaan had 210 positive cases of COVID-19 virus and our 29 people had succumbed to coronavirus disease, according to Emergency Management Director Mike Handler.

Murphy noted that visitors to the downtown should be prepared to use credit cards, as many businesses are not planning to accept cash.

Addressing the business owners during his report on the question of enforcement of mask-wearing, Moynihan said, “The town has no plans to have our police officers enforcing masks. And we also don’t expect people to try to enforce it against other people, other than shopkeepers and restaurateurs. Your obligation is to say, ‘I’m sorry, I have to turn you away.’ You cannot let customers come into your establishment without a mask. So you are going to have to enforce it.”

Murphy noted that only allowing people wearing masks inside businesses is part of Lamont’s order. She said the town is providing businesses with masks to hand out, and that plans call for consistent signage throughout the downtown so that the public is educated on what is both required and expected of them while shopping and dining.

Moynihan said, “We have gotten memos from our lawyers that it is a town’s responsibility to enforce the governor’s order. But they have been encouraging people to be liberal with giving warnings first before giving fines. I think the maximum fine is $500 for violating the governor’s order. You see people around the country start to challenge things, but hopefully in New Canaan we will be respectful and the best policy you can have is to hand someone a mask that doesn’t have one. And they will get the message after a while.”

He added that what New Canaan must not see happen is that parts of the downtown become “a street fair, like the Sidewalk Sale.”

“And if we begin to see really bad behavior, we may have to face taking some action,” he said. “In other towns, the talk has been that anyone who violates orders, the Health Department has the authority to shut the business down. I would hope we do not see that. Whereas we don’t plan to use civil fines against individuals, the ultimate weapon the Health Department has if people people are flagrantly violating the governor’s order is to shut a business down. That has been talked about in other towns, I hope we don’t have to face that in New Canaan.”