Long-time New Canaan resident Muriel Heilshorn Kilbride died on March 18th in Montclair, New Jersey. Muriel served as a Deacon of the Congregational Church of New Canaan and was involved in many activities in the town and at Lapham Community Center. 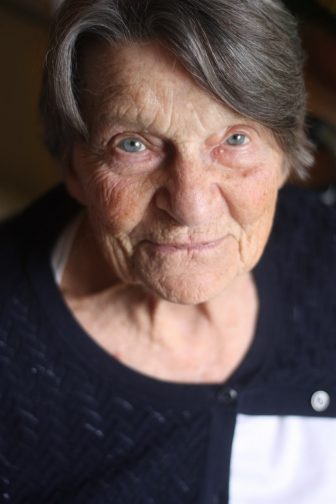 She was born in Brooklyn on June 26, 1923 to William H. Heilshorn, Jr. and Anna Hudaff Heilshorn and was raised in Floral Park, LI and Norwalk, CT. She attended Norwalk High School but met her future husband John J. Kilbride (Jack) when they were Senior classmates at Sewanhaka High School on Long Island.

As life partner to an international shipping executive who was travelling continuously on business, Muriel was an accomplished home front chief executive juggling the demands of raising five children at home in Bellerose Village, LI and was an accomplished hostess, chef, needle worker, gardener, creative force, family counselor and community and church volunteer. She was a dear companion and listener to a wide circle of cherished life-long friends. Muriel was a lifetime learner always enrolled in some sort of coursework ranging from Literature to Opera to Bible Studies to Flower Arranging. She was the longest matriculated student at C. W. Post College on Long Island.

She and Jack travelled extensively both internationally and across the U.S. as they worked through their bucket list of National Parks. She was Jack’s navigator on his successful mission to capture a photograph in front of every U.S. state capitol building.

After his death in 1989, Muriel moved to New Canaan, CT to live closer to her expanding family and where she became active immediately in the community and at the Congregational Church of New Canaan. She and her family are also grateful to Staying Put in New Canaan, the GetAbout New Canaan, and the staff of the New Canaan Inn for facilitating her ability to remain and thrive in New Canaan for so long.

But her favorite place in the world was her home on Peconic Bay, Long Island. Her porch luncheons and dinner barbecue spreads of local bounty served overlooking the sparkling bay for visiting family and friends were legendary. From her porch she watched her twelve grandchildren grow and revel in the freedom and beauty of the place. Wi-fi and TV were banned (for a while anyway). She continued Jack’s tradition of hoisting on the flagpole the nautical signal flags of the initials of her grandchildren and other house visitors to welcome their arrivals. She celebrated her 96th birthday last summer on the same porch and with the same style.

Burial was at The Evergreens Cemetery in Brooklyn on March 21 in her family plot. A Memorial Service will be scheduled in the future at the Congregational Church of New Canaan.

One thought on “Muriel Heilshorn Kilbride, 96”