Citing the COVID-19 emergency and its focus on the residents it serves, the Waveny LifeCare Network said in a March 18 letter to the Planning & Zoning Commission that its “mission of caring and commitment to our residents, patients, employees and the entire community remains steadfast.”

“When Waveny LifeCare first formally submitted three separate applications to the New Canaan Planning and Zoning Commission the fall of 2019, we could not have predicted the global events that have taken place since then,” a letter to P&Z from the organization’s Board of Directors said.

“Accordingly, while a potential executive order by Governor Lamont to extend the limits mandated by state-imposed deadlines placed on applications currently in front of local planning and zoning commissions remains a possibility, the Board of Directors and Senior Management of Waveny LifeCare Network has decided to withdraw our pending zoning applications rather than adding to the burden of our volunteer P&Z commissioners and Town leadership,” the letter said. “We do not make this decision lightly but do so with the public’s best interest in mind.”

Waveny will return with a new application when appropriate, Board Chair Kathleen Corbet said in an email.

Signaled in late-2018 and unveiled in July, Waveny’s plan called for 70 units in a three-story residential retirement building located between the New Canaan Museum & Historical Society campus and St. Mark’s Episcopal Church green. While advocates pointed to a lack of options for active local seniors seeking to remain in New Canaan through a “Continuing Care Retirement Facility” model, opponents called the proposed building too large and dense for the site. P&Z held multiple public hearings starting in the fall and was to reach its decision by mid-April.

Waveny’s withdrawal comes as New Canaan grapples with major changes amid efforts to limit the spread of COVID-19.

Public school buildings have been closed since March 12 and will remain closed through at least April 20. Dozens of local businesses have either closed until further notice or drastically changed how they operate. First Selectman Kevin Moynihan announced Sunday that Town Hall is closed to the public and those seeking services should email municipal workers. As of 8 p.m. Monday, by order of Gov. Ned Lamont, “non-essential” businesses in Connecticut must close. Exceptions include those in areas such as “healthcare, food service, law enforcement and similar critical services,” state officials say.

On Friday, 50 people underwent drive-thru testing for the virus outside Saxe Middle School though a newly launched system that requires an appointment, according to New Canaan Emergency Management Director Mike Handler. 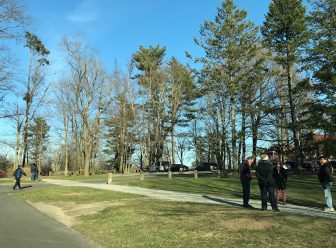 Waveny Park on the evening of March 22, 2020. Credit: Michael Dinan

Handler in messaging the community through voice calls and emails has called for resists to continue washing their hands, observing a six-foot “social distancing” guideline and avoiding group gatherings.

“While difficult to convey in an outcall message such as this, there is a tremendous amount of work going on behind the scenes that we should all be very proud of,” Handler said. “Our health and human services departments are coordinating efforts to bring outside agencies and volunteers together to support all of our seniors within our community. Mental health professionals from the town, public schools, and outside not-for-profits are working together to provide resources to help address our short and long-term mental health needs.”

“We are so thankful that thus far our children have not experienced significant illness as a result, but they are in fact vectors of this virus,” he said. “There group activity will negatively impact our seniors and medically fragile.”

On Saturday, Handler said, “If necessary, we will close all town and school fields.”

Town Hall is operating on a half-day schedule and receiving visitors by appointment only. Elected and appointed bodies last week began canceling meetings or holding them remotely.

The Waveny board in its letter said members “commend each of our New Canaan Planning and Zoning commissioners for their tireless dedication and commitment in thoughtfully considering our application and the significant public input that has come along with it.”