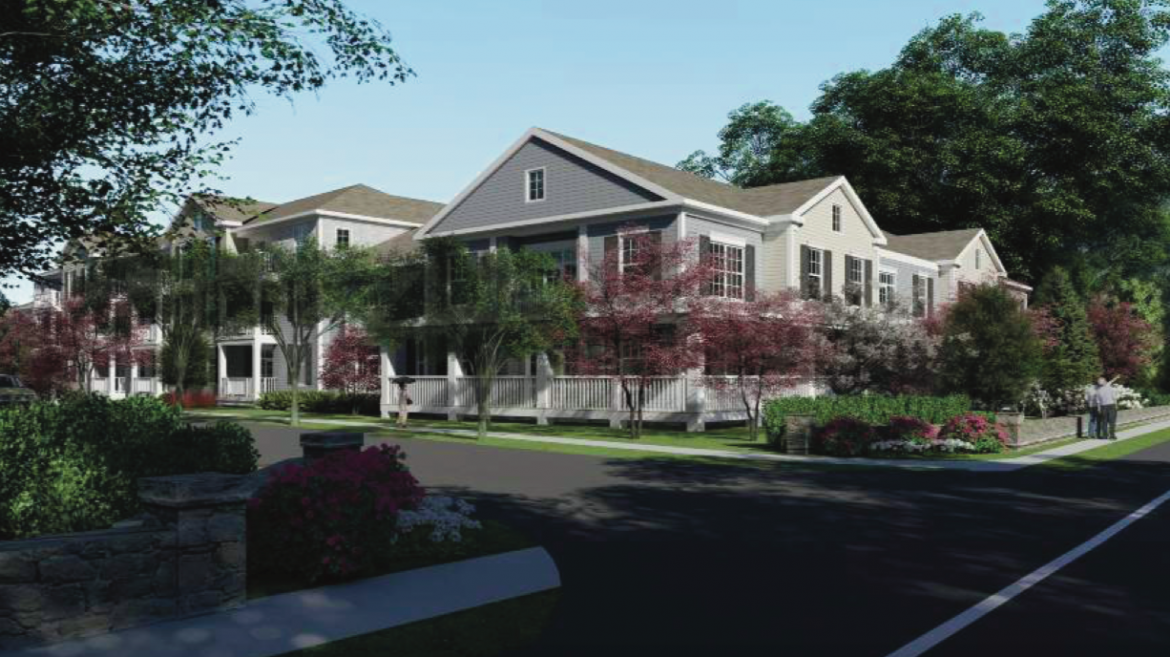 The proposed senior housing complex on Oenoke Ridge is inconsistent with New Canaan’s regulations and violates some precepts of the town’s guiding document with respect to planning, according to representatives of one neighboring organization. 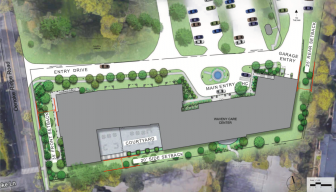 “The Oenoke,” planned for 65 and 73 Oenoke Ridge, seeks to “allow in a one half acre residential zone the highest density project ever built in New Canaan by a large margin, with the greatest coverage of any project and with the least open space,” Finn, of Stamford-based Wofsey, Rosen, Kweskin & Kuriansky LLP told P&Z during its Nov. 19 meeting, held at Town Hall. 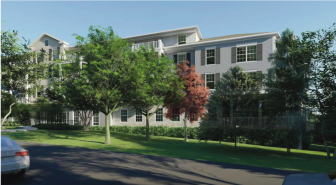 The project would seek to use a driveway that already serves two institutional uses in the residential half-acre zone there, Finn said, and the proposed “Senior Housing Overlay Zone” that would make The Oenoke possible is spot zoning, in part, because it seeks to reclassify a small area of land in a way that would disturb the neighborhood.

“The project that would be allowed by this proposed zone would clearly disturb the surrounding neighborhood and is completely inconsistent with the comprehensive zoning plan that you and your predecessors on this Commission have adopted to protect residential neighborhoods,” Finn said. “You are not being asked to establish a new zone to protect our entire community. You are being asked to provide a new zone for a small piece of property that is tailor-made for just one entity.” 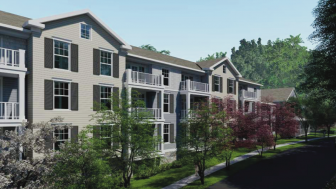 The comments came during a five-plus-hour meeting attended by a standing-room only crowd that gathered in the Town Meeting Room for the second public hearing on Waveny’s application for text changes, a zone change and Special Permit and site plan approval.

Plans call for the merging of three lots located between St. Mark’s and the New Canaan Historical Society that would total 3.5 acres together, and construction of a senior housing complex to be operated as an independent living piece of the larger Continuing Care Retirement Community or “CCRC”—an acronym that has come to represent the proposed building itself. Residences will include 28 one-bedroom and 42 two-bedroom units, with several amenities on site and underground parking. Site plans show a 35-foot setback from Oenoke Ridge and 20-foot side yard setback from the Historical Society property, with a 25-foot rear setback toward Heritage Hill Road. 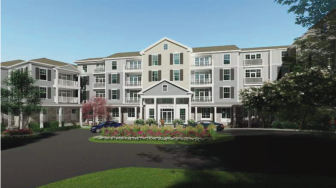 One proposed new front view of the CCRC on Oenoke Ridge. Lantz-Boggio Architects

The application also includes proposed text changes to the Zoning Regulations—specifically, creation of the overlay zone that would, among other differences from the half-acre zone, allow for greater minimum building width.

“We would submit to you that it is not spot zoning because in order to be spot zoning it would have to be out of harmony with the neighborhood and it would also have to not be in the best interests of the comprehensive plan,” he said. “So right now we are submitting that that is not the case. And it is very difficult to actually find a spot zoning case, because you have to have both of those elements in a spot zoning case. You have to have two things, either a small area of land and that the Commission finds it’s not in their comprehensive plan.” 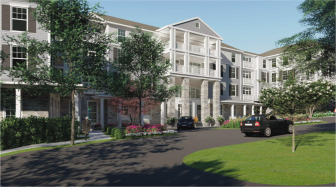 A proposed new front view of the CCRC on Oenoke Ridge. Lantz-Boggio Architects

The proposal has become a flashpoint that’s divided much of the community. While the board of one neighbor organization, the Historical Society, favors the plan—part of it includes the sale of a home that the Society owns—the vestry at St. Mark’s on the other side has withheld its support and, more recently, voiced outright opposition. In a Nov. 11 email to congregants, church leaders said that while St. Mark’s is “devoted to elder care,” it objects to the building’s size and density. “We understand that the Vestry’s position is prudent for some and painful for others,” said the email, signed by the Rev. Peter Walsh, Senior Warden Stan Twardy and Junior Warden Mark Thorsheim. “With prayerful hearts we are seeking to do the right thing for the parish in the long run.”

Waveny CEO and President Russell Barksdale Jr. noted in addressing P&Z that the project started at 100 units and came down to 70 which is “less than half the traditional [independent living] component of CCRC’s as they are built today,” and spoke to the many ways that his organization has been connected for decades with St. Mark’s, saying Waveny is deeply “intertwined” with the church and that they share common missions.

“This friendship remains strong and will continue to be so despite the vestry’s opposition to the location,” he said. “Waveny and St Mark’s parish are supportive of each other in so many ways and this will without a doubt continue uninterrupted.”

Saying that Waveny is listening to all of those weighing in, Barksdale noted several ways that the applicant has adjusted its proposal based on feedback from neighbors and the wider community, including reducing the height of the complex by one full story along Oenoke Ridge, installing more mature plantings to screen the structure and “making several operations changes to mitigate any possible increase in traffic flow and to maximize our on-site parking.” Those include implementing an alternating work schedule for those staffing The Oenoke and introducing shared electric zip cars to assure that residents of the facility don’t need their own vehicles, Barksdale said.

“We believe this project can be innovative in so many ways and we look forward to working with the community to take full advantage of these opportunities,” he said.

Addressing what he called “misinformation” that had been distributed to neighbors, Barksdale added that the facility will have one dining room and “one small bar-bistro area.”

“There will not be three restaurants,” he said. “There is not a commercial building. It is truly residential in design and daily operations. The building is not two blocks long, or even one block long, per our architect’s measurement.”

P&Z in an informational session in July and at the October public hearing called for architectural features to “break up” parts of the proposed structure, a more eco-friendly landscaping plan with pollinators and a rainwater capture irrigation system, and questioned the applicant’s representatives about the accuracy and procedure of a traffic study submitted as part of Waveny’s application. In that study, later re-submitted with updated figures, George Jacquemart of BFJ Planning said that “the proposed CCRC is a relatively low traffic generator due to the nature of the residents and the fact they will be provided with shuttle services.”

“The employees working at the CCRC are a more important component to the traffic generation compared to the residents,” Jacquemart said in the traffic report. “The intersection of Oenoke Ridge Road and The Inn driveway will continue to operate at good conditions with delays for turning movements out of the driveway not exceeding 14 seconds per vehicle. The impacts on Main Street and Park Street in downtown New Canaan would be de minimus and will not be noticeable. Available sight distances at The Inn driveway exceed the required stop sight distances.”

Rucci noted that although the applicant at P&Z’s request had placed stakes around the site to outline the location of the building, those stakes appeared to have been removed by someone.

P&Z Chairman John Goodwin said, “This is not the first time these stakes have been pulled out. I think it’s happened at least twice. And this is the beautiful thing about democracy, we are able to comment on applications. We are able to dispute, and say whether we are in favor or whether we are against. But quite frankly, pulling stakes out, number one makes it hard on the commissioners to accurately assess the property. And number two, it’s just not right.”

The proposed building itself already has changed based on comments from P&Z and others, according to Charlie Schmidt of Englewood, Col.-based Lantz-Boggio Architects & Interior Designers.

While presenting P&Z with updated renderings of the proposed building from several angles, including different options in some cases, Schmidt conceded that the firm may have been off in its assessment that the complex should be similar in its look and feel to one of Oenoke Ridge’s mansions and that the new renderings are intended to show a “more venerable” structure that more closely reflects the nearby Roger Sherman Inn. The reworked plans are meant to “move the character in a direction that is more familiar to you in this town,” he said.

A redistribution of the units over the building’s footprint—moving seven units from the western end to the eastern end—has yielded a two-story piece closest to Oenoke Ridge, and the renderings also showed new elements such as a focus on windows rather than balconies, new shutters, lighter roof color, larger windows with removal of mullions from lower sash, thinner trim, introduction of cedar shake shingles, additional and new colors at gable ends and removal of dormers and chimneys.

“We heard your concerns and we heard that the massing was somewhat overwhelming, that the image of the building was large, especially on Oenoke Ridge, and there were lots of comments about character,” Schmidt said. “And unfortunately they were not very specific, so I had to really listen and really lean in to understand what you meant by that, and I hope that we moved the building in a direction that is closer to something that you will find to be the right character.”

Dozens of residents took to the podium at both hearings, speaking passionately in support of or opposition to the project.

Those in favor, including the applicant, have pointed to the need for more assisted living options in New Canaan, the town’s aging population, the fact that focus groups informed the specific Oenoke Ridge proposal, the suitability of site and ways that the plan reflects what’s outlined in P&Z’s guiding document, the Plan of Conservation and Development. In filing an application on behalf of Waveny, Rucci said the project meets criteria for a Special Permit in that the area already is a mix of residential and non-residential uses, the proposed building is in character with the neighborhood’s architecture, the parcel has no wetlands, the site is connected to the nearby downtown via sidewalk and the value of adjacent properties is not diminished.

Those opposed to The Oenoke told P&Z that the proposed building would loom too large for the neighborhood, including condominiums on Heritage Hill Road, would be out of character with New Canaan in its scale and proportion, devalue nearby properties, create traffic and parking problems, present safety concerns for residents in event of an emergency, and that St. Mark’s holds specific deeded rights to a piece of the property involved in the project.

Members of P&Z asked whether the building’s architects were aware of P&Z’s Village District Design Guidelines (yes), how many of the 70 units would have balconies (at least 60), whether plans include a community garden for residents (not now but they could go on the southern side of the site), whether Waveny LifeCare provides skilled nursing, assisted and independent living facilities under the state’s definitions (yes), whether the architects increased the front yard setback as part of its revisions (no) and whether landscaping care will be organic (the maintenance plan hasn’t yet been developed).

P&Z continued the open public hearing to its Dec. 17 meeting.