The head of the New Canaan Police Department’s Animal Control section is urging residents to leave the fawns they’re finding on lawns, in the woods and other areas of their properties alone for 24 hours after spotting the newborn deer. 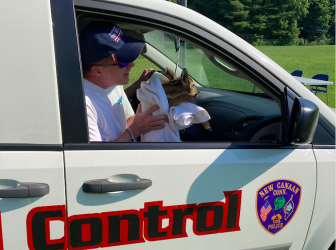 The mothers of fawns are typically “in calling distance and will return within seven to eight hours,” Officer Allyson Halm said.

“Fawns are hard-wired to lay perfectly still and are odorless which protects them against predators,” she said.

Animal Control has been fielding phone calls daily from residents about fawns being left alone.

On Monday, as West School prepared for its Field Day activities, officials there found a fawn curled up by a backstop, Halm said. In that case, the animal had to moved to a safer location on school grounds, given what was planned for the day, she said.

A West School staff member helped Halm relocate the young animal to the other side of a field, she said.

According to the Connecticut Department of Energy and Environmental Protection, white-tailed deer fawns usually weigh four to eight pounds and are born in June.

“They remain under the female’s care through September, when they are weaned,” according to DEEP. “The number of young born ranges from one to four, depending upon the age and condition of the doe. In Connecticut, twins are common and triplets and quadruplets have been recorded. Female fawns born early in spring have the potential to breed by the following fall.”

The state agency added: “Frequently, well-meaning people find a fawn alone in the woods and bring it home without realizing that the doe was nearby all the time. To divert the attention of predators, female deer only visit their fawns three or four times a day, for about 15 minutes per visit, in order to feed them. Not only is removing a healthy fawn from the wild illegal, but it also reduces the animal’s chances of survival.”