The New Canaan Animal Control shelter has been closed since Dec. 31, officials say, when they had to shut off the water there because of a failed heat pump at the brick building. 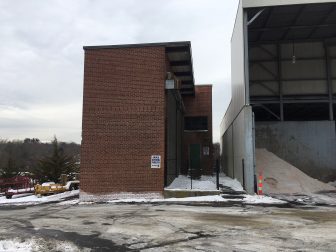 The sustained freezing temperatures of the last two weeks essentially rendered the small structure at the dump unusable, according to Bill Oestmann, superintendent of buildings for the Department of Public Works.

“When it gets down to these temperatures, it’s an old incinerator building, it’s a non-insulated building that was never designed to have heat in it and the heat they put into it cannot keep up with zero-degree temperatures consistently,” he told NewCanaanite.com when asked about the problem.

Mercifully, none of the animals that typically take up residence at the shelter—primarily roaming, injured or “dumped” dogs—have lived there since the heating failed. Asked about what sort of accommodations the New Canaan Police Department’s Animal Control section would make for animals now, Officer Allyson Halm said that New Canaan Veterinary Hospital has agreed to take them in during business hours, and that a crate has been set up in the garage at police headquarters for after 5 p.m.

Oestmann said he’s hopeful to have the problem fixed later this week as temps are expected to tick up into the mid-40s by Thursday and Friday.

It’s just the second time that the heating in the shelter has failed in the 23 years that Oestmann has been working for the town, he said.

The Animal Control shelter at the Transfer Station is not designed for long-term care of animals, though thanks to the generosity of a local Girls Scouts Troop the facility has seen upgrades in recent years, including the purchase of a dryer and fencing to create a “meet-n-greet” pen out front.

Under state law, the floor-level of a shelter such as New Canaan’s must be at least 55 degrees, and the facility itself may not exceed 90 degrees inside.

“It’s a temporary holding facility but any animal that comes in is obviously in our trust and is our responsibility,” Halm said.