Great news here for fans of the recently closed Chicken Joe’s on Elm Street: The popular eatery is reopening under new ownership with a similar though expanded menu, as early as this Thursday. 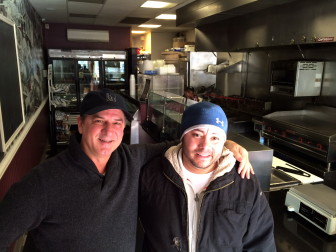 ‘New Canaan Chicken’ owner Pren Lleshdedaj said he’s excited to have hired three chefs from Chicken Joe’s to work the line while making plans to expand fresh offerings such as salads and even fresh made hamburgers from scratch.

“I like this little town,” the Norwalk resident said Tuesday morning as his crew hustled to prepare the space at 151 Elm St. for launch. “I am glad that I am starting something in New Canaan and I hope that it will go well.”

A Croatia native who had owned his own restaurant in Kosovo, Lleshdedaj moved to the United States in 2002 with his wife and their children, and he’s worked in the food business here, recently managing Bronx restaurant Frankie & Johnnie’s. 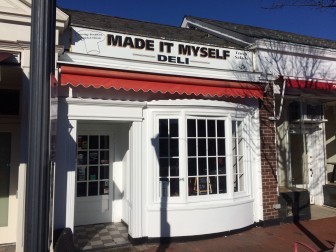 The old “Chicken Joe’s” sign has come down, revealing its predecessor’s sign in the Elm Street space. New Canaan Chicken will open as early as Thursday. Credit: Michael Dinan

Plans for New Canaan Chicken—so named, Lleshdedaj said, because it will offer the best chicken in town—include introducing a breakfast menu, catering and deliveries over time, after the imminent launch.

“There will be something for everyone,” he said. “It’s going to be delicious.”

Asked for her thoughts on the rapid re-opening of the space on Elm as New Canaan Chicken, Tucker Murphy, the executive director of the New Canaan Chamber of Commerce, said: “We welcome new businesses to town and we’re thrilled that the residents and visitors of New Canaan will have a familiar spot for their favorite meal.”

The familiar wall that features photos of New Canaan High School athletes will remain, Lleshdedaj said, and he’s eager to serve the same population of young people long devoted to Chicken Joe’s, while bringing in an even wider demographic.

A diner and regular visitor to New Canaan for many years, Lleshdedaj said he enjoys the pace of life in town.

“It’s a quiet area, and I have always looked to open somewhere [where] people are kind and it’s quiet, not crazy,” he said.