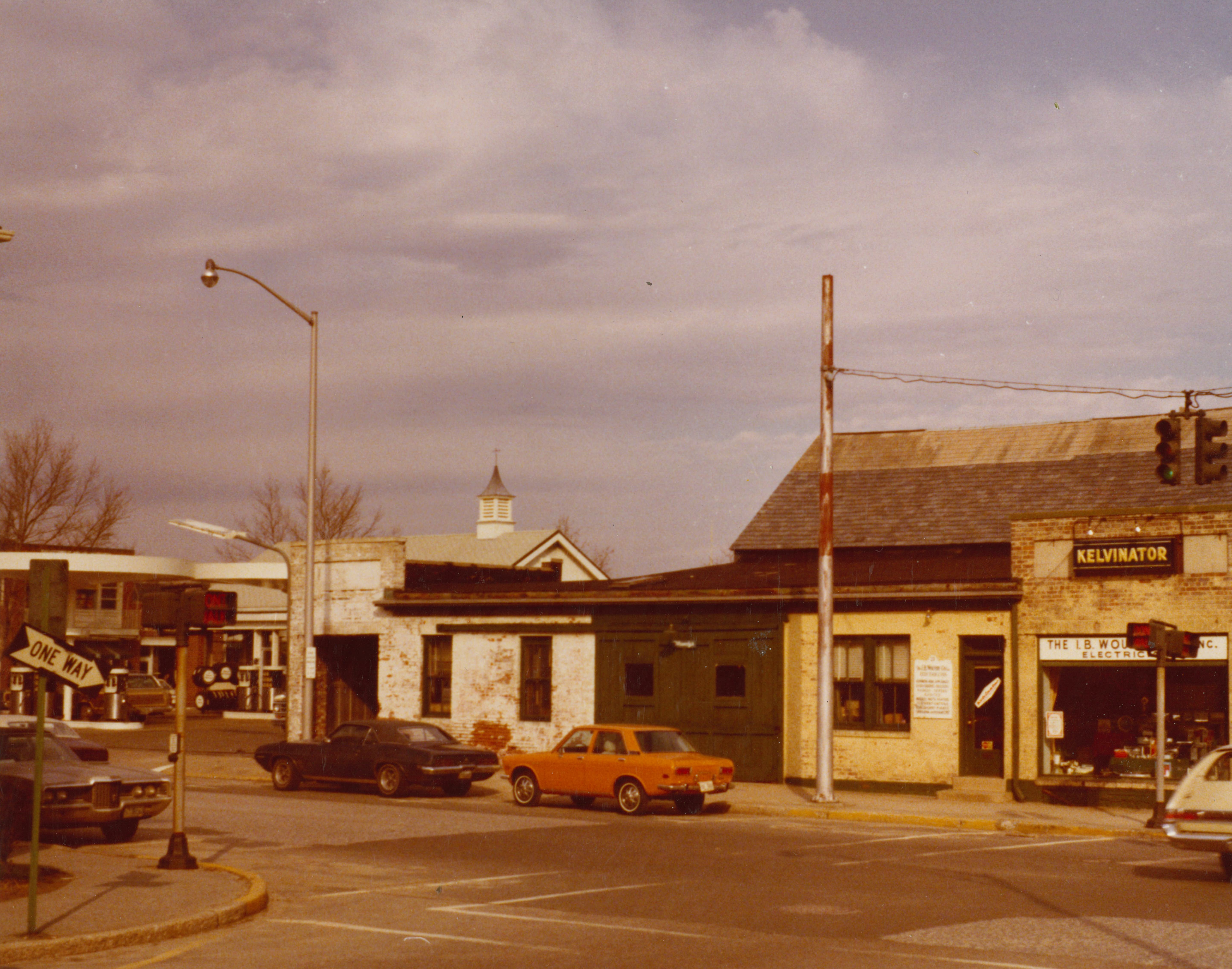 Before the Mobil Gas Station occupied the corner of Cherry Street and South Avenue it was home to I.B. Woundy Company, Inc seen in the extreme right of the photograph. Theodore W. Benedict had run an electrical business there.  When Benedict decided to work for his family’s shoe manufacturing company, he sold his business to his friend, Ira B. Woundy.  The purchase closed on March 17, 1906.  Mr. Woundy rode his motorcycle to job sites the first year, but then purchased one of the first four-cylinder models put out by Ford.

Woundy enrolled in a correspondence class to learn his trade and, according to an article in the Electrical Record dated August 1928, his ability to learn from mistakes helped his business thrive. Woundy’s first customer was Lucius M. Monroe who had two sockets installed in his drug store on Main Street. The cost was $1.20 – sixty-five cents for the sockets and the balance for labor.  Woundy also wired the first house in New Canaan for Gilbert F. Stevens at a cost of $25.50.

Woundy’s success was attributed to his keen business sense, careful analysis of overhead costs, specialization, and helpful demeanor. Woundy also kept up with trends, stocking a good supply of appliances in his store as they became more readily available. He also had the foresight to be one of the first dealers in this area to stock radios and sent his employee, Myron Miller, to three service courses on radios, allowing his customers to have a “radio expert” at their disposal.

Another key component to Woundy’s success was his integration into the community; he donated his expertise in lighting to events such as assisting the holiday decorating of the post office and in 1957 won the grand prize for his holiday window display. Woundy’s business was so successful that in 1928 he incorporated the business, making his employees part of his future. Miss Nellie Doyle (the bookkeeper), Earle Rover (the electrician) and Myron Miller (the radio expert) were now his business partners.

In 1973, the wooden barn next to Woundy’s was demolished and Woundy’s location followed soon after. The property was owned by Edith C. Barnes, Earle M. Rover and Rosa Y. Scott at the time and the contract owner, Mobil, planned to install three additional gas pumps adjacent to the existing Mobil station on Morse Court to the property once owned by Moody.

There was some community pushback with this proposal, The Citizens Continuing Committee for Conservation, logged their objection at the May 1972 Planning and Zoning meeting. The committee felt that the additional pumps would be a “visual catastrophe” and it would convert the main entrance to town into a “gasoline alley.” Earl McClure, Mobil’s lawyer, stipulated that he would work with the town if the town pursued the widening of Cherry Street as part of the “Circle Route.” The “Circle Route” was finally completed in the late 1970s and the unsightly three pumps were never installed.