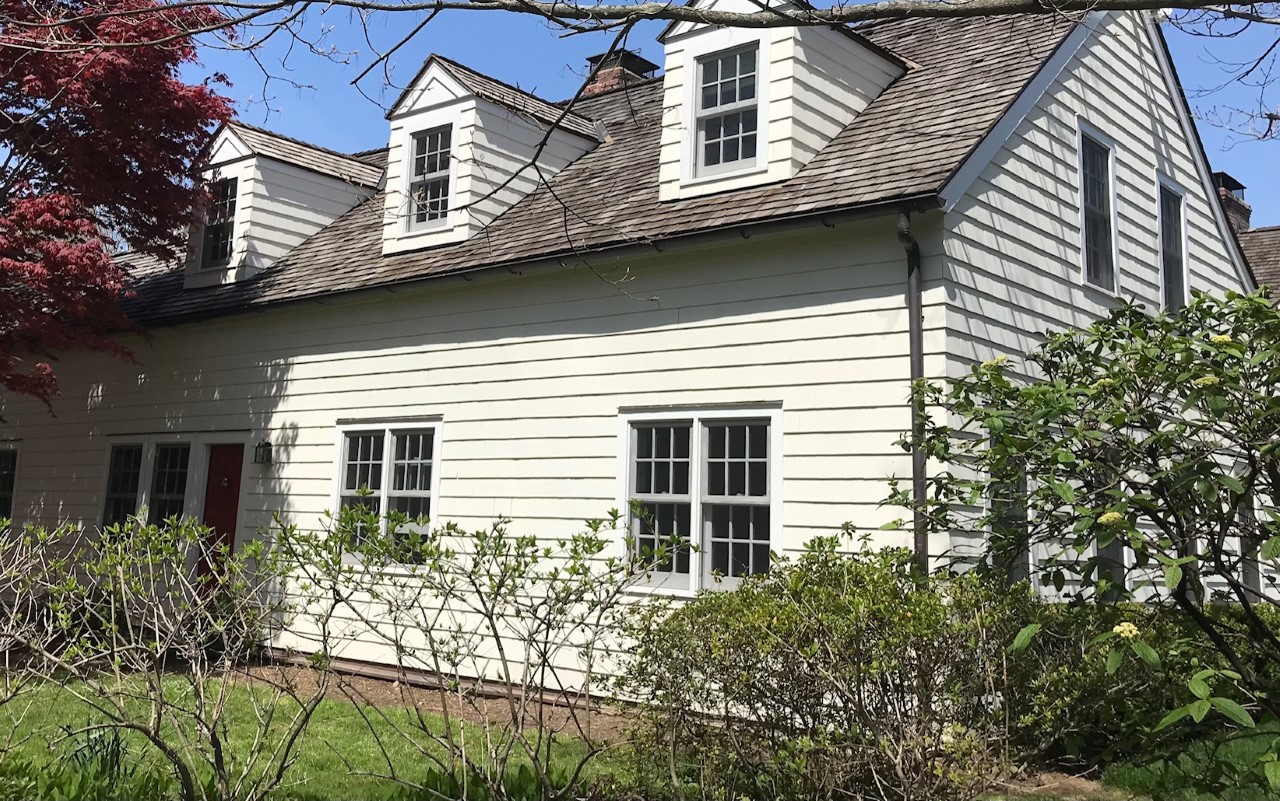 This photograph was taken sometime before 1888 of 372 Brushy Ridge Road, a home built by Timothy Hoyt in 1732. It was known as Long Meadow Farm. The man seated in the picture is Timothy’s descendant, Samuel Hoyt; his wife, Clarissa, stands in the doorway. Samuel Hoyt was a harness maker who most likely supplied the local farms. His most notable customer and neighbor was Gilbert Birdsall, who owned the Birdsall Inn on Main Street (now the Morse Court parking lot.)

Eventually the Hoyts sold the house in 1907 to Albert and Laura Mills. Little is known of Mr. Mills, a salesman for the Gage Hat Company, but his wife, Laura, is legendary. Twenty years after his death, she remained in the house with 13 Dalmatians for company, along with a herd of Jersey cows. According to Mrs. Harold Gillen in her article in “Landmarks of New Canaan,” Laura was a hoarder, and the house was filled with shoes and dirty dishes on the mantel, men’s nightshirts bulging from the drawers, and the constant drone of the radio. Despite the messy interior, Laura ran a successful dairy business and, in her own words, “was not afraid of man, beast or devil.”

Mills styled herself the “Witch of Endor.” As if to support this claim, Mills was never without her felt cloche hat that had taken on a point over the years. She claimed to be a member of the Mazdaznens religion. (This is most likely a misspelling of “Mazdayasnian” which is another term for the religion Zoroastrianism, an ancient Persian religion that was first recorded in the 6th century BCE.) Her membership in this religion is further supported by the care Mills gave her cows and dogs; she treated animals as if they were human. (A core belief in Zoroastrianism is that all living beings, both humans and animals, have an important role to play and must be treated as such.) In an attempt to convert Mr. and Mrs. McGhie, who purchased the house in 1933, Laura Mills gave them a pamphlet on her religion.

The McGhies did not appear to have been convinced.

Laura Mills is also the reason why there are no records on Samuel Hoyt’s harness business. Mills apparently threw the records and all the old furniture that came with the house into a bonfire at some point. She felt that, after the McGhies bought the house, they should simply burn it down and buy a Sears Roebuck mail order house to replace it. They refused. But even though the house was sold, Laura Mills did not stay away for long. She asked to live in the dairy barn until she could find good homes for the cows. Apparently, the McGhies said yes, because she lived there for some time but never found homes for the cows. When she passed away, her caretaker confirmed she was from a wealthy family in Chicago, and suspected that her silver and jewelry was buried or hidden somewhere on the property.

The McGhies continued the dairy business, hiring and building a home for John Socci, who cared for the 28 cows.  Unfortunately, the dairy was closed during World War II.

3 thoughts on “New Canaan Now & Then: The Hoyt-Mills-McGhie House”