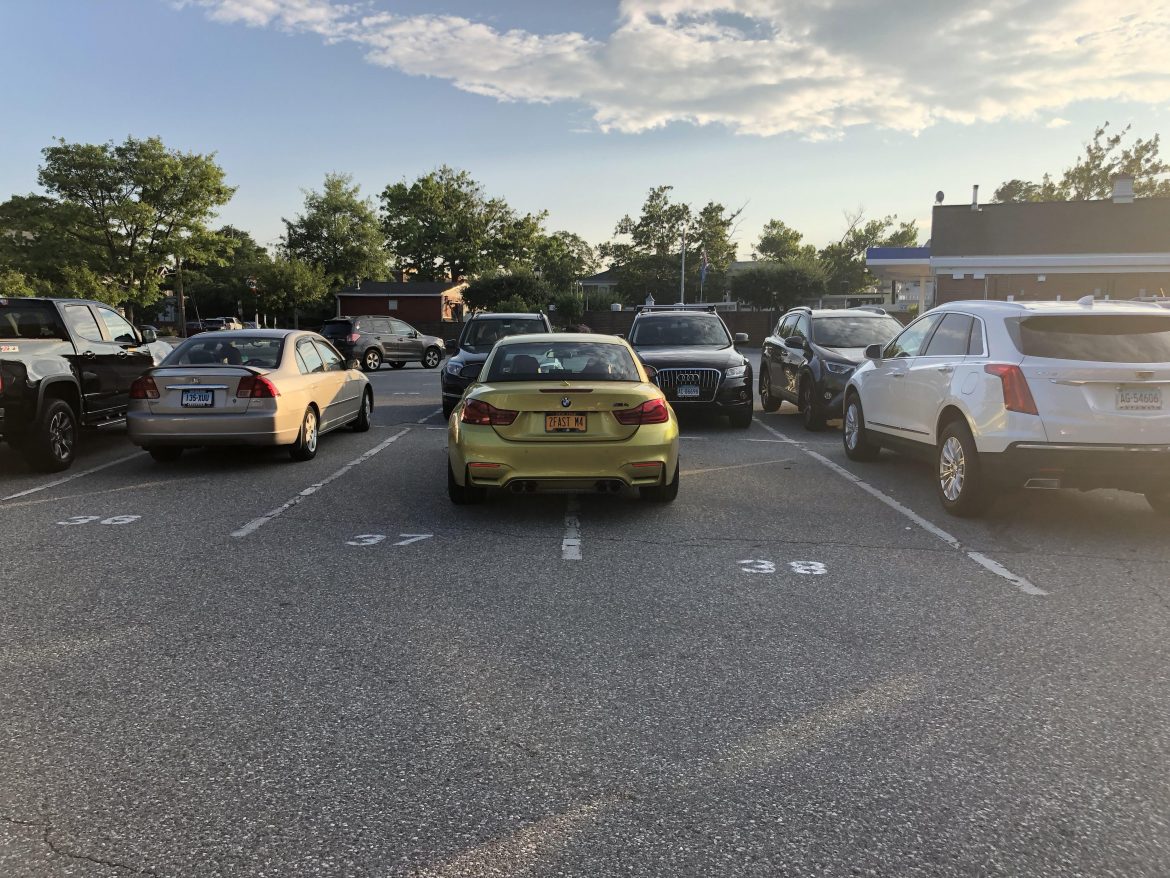 A New Canaan resident has complained that parking stalls in Morse Court should be wider to meet local regulations. BT photo

The width of parking stalls in Morse Court fails to meet a 9-foot minimum specified in New Canaan’s own Zoning Regulations, according to a town resident who has advised the first selectman’s office on the matter.

State law appears to require that municipalities abide by their own regulations, according to Jeff Holland, and “[i]t also appears that a town cannot cherry-pick which regulations apply or which don’t.”

“Parking Commission minutes show that several people have been ticketed for parking outside of the lines demarcating spaces,” Holland said in a Nov. 14 email to Tom Stadler, administrative officer in the first selectman’s office.

“Most of these instances are on Elm and in Morse Court,” Holland continued in the letter, obtained by NewCanaanite.com through a public records request. “I have also heard that drivers avoid parking in Morse Court because their car doors get damaged, as the parking is so tight. The parking spaces in Morse Court are nowhere near the minimum width of 9 feet … It’s easy to see how drivers are getting tickets—it almost seems like entrapment. Just one car parked slightly out of place creates a chain reaction of violations down the line. I feel that these spaces should meet at least the minimum standards in the Town’s regulations, especially if the Town is charging for them, or ticketing people.”

He referred to a section of the New Canaan Zoning Regulations that says the curb length of an off-street parking space squared up 90 degrees to a curb must be nine feet (page 130 here).

The letter goes on to note other areas where the town isn’t following parking regulations, and challenges a decision to continue allowing cars to park along the sidewalk of Morse Court in both directions.

It wasn’t immediately clear whether the letter will require New Canaan to act or whether it would trigger a further loss of parking downtown.

The town in the recent past has been forced to act with respect to parking after receiving formal notice. Last summer, after a town resident put New Canaan on formal notice about its noncompliance with a same statute, parking on Elm Street was reconfigured such that 13 spaces were lost. The town subsequently was prompted to re-designate 12 parking spaces for disabled motorists due to an anonymous ADA-related complaint filed with the U.S. Department of Justice. Most recently, a complaint lodged with the state led state officials to push New Canaan for reconfigured parking on Main Street, which appears to require a net loss of at least six spaces.

Holland in his letter said there are other requirements of the Zoning Regulations “not being followed,” including one for green space “and the siting of the accessible parking so that physically handicapped persons shall not be compelled to wheel or walk behind parked cars to reach the nearest accessible ramp.”

“Since so many of the Town’s lots and streets are in need of a sprucing-up, and design decisions, good or bad, are quite literally set in stone, I would like to know how the Town applies its regulations,” Holland said. “Clearly the existing regulations were the result of some sort of public process that involved input from the community, commission, and subject matter experts. I would like to know if they apply to the Town itself,” as apparently required by state statute.

Holland continued in the letter, “I also have a concern that, despite a traffic consultant’s recent advice to discontinue ‘left wheel to the curb’ parking in Morse Court (it’s actually a mix of left and right that I have never seen anywhere before), the Parking Commission has opted to let the practice continue. Vehicles entering and leaving these spaces are driving illegally and dangerously on the wrong side of the road. A pedestrian stepping into the roadway would normally look left for traffic, but could easily be struck by a vehicle coming unexpectedly from the right instead.”

Noting that Parking Commission minutes suggest the appointed body feels continuing the practice in Morse Court is “in the community’s best interest,” Holland said he disagrees.

“[A]nd I would think that the Town’s insurer might have concerns about this as well,” he said. “If someone is injured due to this decision by the Commission, I doubt that the Town could rely on a defense of “technically it’s a parking lot”, most especially when a licensed engineer advised against it. I think that it’s important that the Town’s legal counsel advise on this.”