Though she had no family history of breast cancer, New Canaan resident Jacqueline Dorman goes diligently for mammograms and—as an additional (not substitute) screening tool that sometimes can detect masses where mammography isn’t helpful, the American Cancer Society says—ultrasounds. 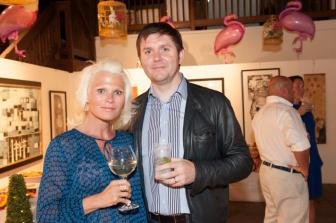 Last December, through ultrasound, the 45-year-old mom of three discovered that she had two masses in her breast, and one of them was malignant.

After testing positive for “BRCA2”—sometimes called the “breast cancer susceptibility gene”—Dorman in January underwent a double mastectomy, reconstructive surgery and, fearing the development of ovarian cancer, a partial hysterectomy.

On Thursday, Dorman—a Scotland native and town resident for 10 years who is a professional lawyer—will join other local breast cancer survivors for New Canaan’s first-ever Pink Stroll, a joint effort of the Chamber of Commerce, local merchants (full list below) and Connecticut affiliate of Susan G. Komen. The event, to run 6 to 8 p.m. Thursday at participating shops, will see Dorman and other survivors model fashions of the individual stores while donating 10 percent of all proceeds to Komen and raise awareness and funds for breast cancer research.

“I consider myself to be enormously fortunate,” Dorman said of her early-stage detection and the network of support provided by “the fantastic people” at Stamford Hospital who she said “made an awful situation as bearable as possible.”

Laura Budd of the chamber said the Pink Stroll marks “yet another example of the generosity and community spirit shown by our local merchants who are opening up their doors hosting a party and in many cases donating a portion of the proceeds to the Komen foundation.”

“We also want to thank the strong and brave breast cancer survivors who are donating their time to be in the stores the evening of the stroll to help raise awareness about this terrible disease that is all too prevalent in our area,” Budd said. 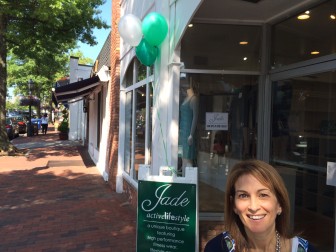 Dorman will be stationed as a special guest at Elm Street boutique women’s fitness wear shop Jade. Owner Maxine Berg said that as soon as she heard about the Pink Stroll, she wanted to participate “for so many reasons, not the least of which is I am a huge, huge supporter of breast cancer research.”

Berg ran in the first-ever Race for the Cure in New York City in 1991.

“It’s amazing how much the research and the awareness has helped over the last several years, for early detection and the availability of people for mammograms,” Berg said. “I feel like breast cancer is going to touch everybody at some point and I would do anything I can.”

For Dorman, an active Young Women’s League of New Canaan member whose kids are 11, 9 and 5—students at Saxe and West School—discovering the malignant mass in her body may have been life-saving, and she thinks of the impact on her own children.

“For me, information is power, because then you can make choices,” Dorman said. “Not everyone feels that way, but that is how I feel about it, and I really don’t want anyone to miss a mammogram. You never know, you could be blindsided just as though you’re driving along the Merritt and get hit by a truck.”

Participating stores for the Pink Stroll include: