The widely anticipated renovation of Town Hall is on pace to wrap up next spring and officials said Monday that even after earmarking about three-quarters of what’s been budgeted for contingencies, the project is on track to come in at its estimated $18 million.

According to the Joseph Zagarenski of Bridgeport-based firm The McLoud Group, which is overseeing the project as construction manager, the project is within two days of schedule and with the installation of steel by the end of June, “We will be 100 percent on schedule.”

“The foundation is 95 percent of the way complete,” Zagarenski said during a meeting of Town Hall Building Committee III, held in the Adrian Lamb room at New Canaan Library.

“The frame will go up in the next two to three weeks. It will be a huge difference in what you see.”

A project expected to improve dramatically New Canaan’s main municipal building and services, the Town Hall renovation since its inception has been guided by principles of creating a modern facility (adding ADA accessibility and built-in technology to ease public use, for example) while retaining the historic character of the original 1909 structure (it was designed by celebrated architect Edgar Alonzo Josseyln after he’d won a competition for the right to do so, historians say—by then he’d already designed what’s now called the “Old Town Hall” of Stamford).

The following renderings of the renovated New Canaan Town Hall are from White Plains, NY-based KSQ Architects and have been included in multiple presentations to town officials over the past two years. Hover your mouse over each slide for information on what you’re looking at (article continues below). 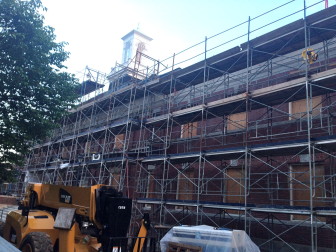 New Canaan Town Hall while under renovation, on May 19, 2014. Credit: Terry Dinan

Nearly all of the demolition work at Town Hall is finished—completed for the most part with the abatement on the site—with some insulation and ceilings still to be removed, Zagarenski said. The committee vetted details such as the shapes of bricks to be used for the building’s exterior and specific shade of gray for mortar.

Since plans for the project first got underway, discussion surrounding Town Hall’s renovation has touched on cost estimates, timetables for completion and some downtown parking concerns during construction.

With a renovation project at an historic structure—rather than a straight demo and rebuilding, say—construction crews expect to run into “surprises,” Zagarenski said.

One recent example include patches done at Town Hall’s pediment—the parapet just above the front of the building in the center, Zagarenski said.

“One of the things in working on a building from 1909 is when you take off the cast stone and then you find out the masonry actually behind, you can pull it off,” he said. “Unfortunately, that was something that has been in the works for the past 50 years, and we just uncovered it.”

Contingency funds to replace the pediment’s cast stone that wasn’t structurally sound, and to build the pediment itself, come to a total of about $46,000. Other contingency costs include $122,000 toward plaster restoration (an item that had to be re-bid) and ledge removal.

Those costs are coming out of contingency funds built into the $18 million project, Mallozzi said.

Officials at the meeting also said that some anticipated costs, including relocation expenses and outside consulting fees, will come in at less than what was projected.

[Editor’s Note: This article has been corrected with the correct name of the project manager from The McLoud Group.]