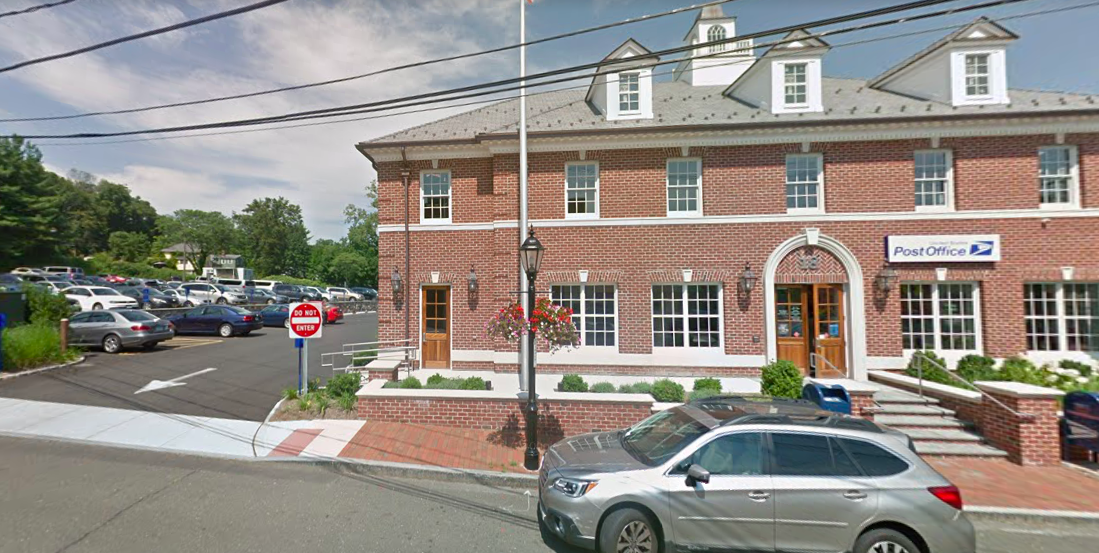 This is where it happened. Streetview photo

Town officials last week upheld a $150 ticket for a woman who parked in a handicapped spot at the Post Office on Locust Avenue.

Anila Tirja described herself to members of the Parking Commission as a nurse from Europe who is unfamiliar with local rules. Even so, Tirja told the Commission at its most recent meeting, on the day in question she had circled the Post Office lot three times and thought it would be OK to park in the designated space so that her friend could run in and pick up an important letter “because the whole line of handicapped it was empty.”

“Everywhere it was big line,” Tirja told the Commission during an appeal hearing at its Nov. 1 meeting, held in Town Hall.

“The minute she open the door, she runs away. Her son was in the car, I see a person standing behind my car. We didn’t even have a chance to go out. She said you are in the handicapped. I said, no, I went three times, I don’t have time, because my friend had to park car, I am coming out in a second. I am so sorry, I know I am wrong, but you see, I said, all the handicapped parking are empty. If somebody comes it has a plate, all the other parking are super full and people are even in the street. She said, if it is me, I will never move this car.”

Chairman Keith Richey said that officials in New Canaan try to limit the number of on-street handicapped spaces because that restricts others from using them and the downtown is already crunched for spots. As a result, Richey said, there are times when it appears in off-street lots that there are more handicapped spaces than needed.

However, Richey added, that doesn’t mean that just anyone can park in handicapped-designated spaces.

“I can understand the temptation to use the spots, and basically it has not changed our policy of enforcement,” Richey told Tirja.

During the panel’s deliberations, Commissioner Pam Crum noted that Tirja started to back up her car with the officer still standing behind it.

Richey said the woman may have been nervous and didn’t intend to strike the officer with her vehicle. (In fact, during her appeal, Tirja had said, “I got a little bit scared because I think maybe I get arrested for this thing in America.”)

Crum added that the enforcement officer had spotted Tirja parked in the handicapped spot from the top of Locust Avenue, “so it wasn’t just parked there.”

“She [the parking enforcement officer] walked down to where the car was to give her [Tirja] the ticket,” Crum said. “It was not just there for a very short time.”

Richey said it’s possible to walk down Locust in three minutes. He suggested the Commission uphold the ticket but lower the $150 fine.

Crum moved to uphold the entire amount, saying, “You can’t, on something like this. You cannot reduce handicapped.”

Commissioner Peter Ogilvie seconded her. After a moment’s hesitation, Commissioner Stuart Stringfellow followed. The Commission voted 3-1 to uphold, with Richey voting against it.