Town officials last week voted 3-2 to uphold a $30 ticket for a man who admitted that he parked in a designated loading zone but said it was an honest mistake and he didn’t know about the rule there. 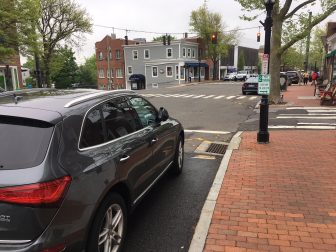 This is where he parked, a loading zone from 7 to 11 a.m. Credit: Michael Dinan

Bob Landeck identified himself to members of the Parking Commission as a town resident for 22 years, and said he had parked out front of the former Thali building on Main Street on a Saturday to run into the People’s Bank for a few minutes.

“I went to use the ATM machine and when I got back, he wrote me up,” Landeck told the Commission during a May 10 hearing on the ticket, held at Town Hall. “Now I think since it’s a brand new sign, I think maybe they should put a yellow thing on the curb, because now i notice the sign, but I did not notice a sign when I parked there.” 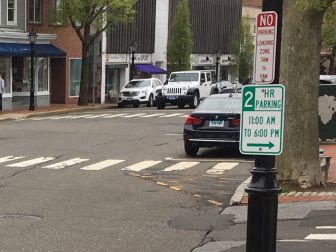 A close up of the new sign. Credit: Michael Dinan

During deliberations, Ogilvie said: “I think all parking violations are honest mistakes and that is what [Parking Manager] Stacy [Miltenberg] makes her business out of.”

He added: “It’s not as though the sign was hiding behind something.”

Crum said: “There was no reason not to see it.”

The area directly in front of Thali, or the old “bank building” as many New Canaanites know it, has been a designated loading zone for more than two years.

Miltenberg, a guest at the meeting, said the town didn’t enforce the loading zone rule in the past because there had been confusing signage there—namely, one sign that said it was a loading zone from 7 to 11 a.m. and another saying it was 2-hour parking from 9 a.m. to 6 p.m. Yet that signage was changed about three months ago, so that one says it’s a loading zone 7 a.m. to 11 a.m. and another specifying 2-hour parking 11 a.m. to 6 p.m.

The gentleman, Landeck, said he had never received a parking ticket in 22 years here and that the town should “just put a yellow stripe on the curb just to make it more evident that it is not a legal spot and this way people will not just go make a mistake.”

Richey said he himself “never knew” the area was a loading zone.

“I park there myself,” Richey said.

He added that he had “never seen anybody loading there, either.”

When Richey asked his fellow commissioners whether they’d ever seen a truck using the zone, Stringfellow said: “I don’t hang around the bank.”

Regarding the efficacy of the designation, Ogilvie asked: “Does that make a difference to a parking violation? That is for another night’s discussion.”

Miltenberg said one possible reason that the town isn’t marking the curb yellow at the loading zone is that it may prevent motorists from parking there during non-loading zone hours.