Responding to a business owner’s request, town officials are re-designating an area of Locust Avenue as 30-minute parking.

The areas directly in front of the Post Office and Joe’s Pizza across the street long have been two-hour parking, as is the rest of downtown New Canaan. 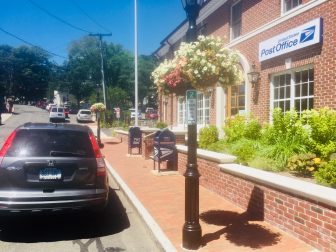 Yet town officials recently confirmed with parking enforcement officers “that the people that were parking on that street were not frequenting businesses like Joe’s Pizza or the Post Office—they were using that area to park and go to an office or other places of work,” Parking Manager Stacy Miltenberg told members of the Police Commission during their regular meeting last week.

The town long has urged employees of downtown New Canaan businesses to park in municipal lots and leave coveted on-street parking for those seeking to shop and dine here. Last year, the Parking Bureau issued a new type of permit, in Morse Court and the Park Street Lot, specifically to that end.

Police Commissioner Jim McLaughlin said at the meeting, held in the New Canaan Police Department, that both the Post Office and Joe’s Pizza are “by their nature” places that people visit quickly to “either sit and eat slices at the pizza place, but you are out in 15 or 20 minutes, and the Post Office sometimes has long lines but you are not in there that long.”

The Police Commission, which oversees on-street parking in town, voted 3-0 to reduce the parking times in both areas.

In addition to McLaughlin, those voting in favor of the change were Chairman Sperry DeCew and Commissioner Paul Foley.

Originally, Miltenberg asked to change the parking times on the south side of the street from Joe’s Pizza up to the nail salon back of the firehouse. But Police Chief Leon Krolikowski said it would be better to make the change in a smaller area and talk to other businesses there before expanding beyond Joe’s Pizza.

DeCew asked, “Is any of this going to set any kind of a precedent where people are going to say, ‘Our business is located somehow where the road is blocked too long so give us 15 minutes’ ?”

Miltenberg said she didn’t think so, because the Post Office and Joe’s are located off of the main downtown streets “and I do feel people working on Forest Street at using that two-hour area to park and go to their offices without using the Locust Lot.”

The Parking Commission, which oversees off-street parking in New Canaan, had backed the proposal at its regular meeting on July 12.

There, the original suggestion had been to re-designate the spots as 15-minute parking. However, Parking Commissioner Pam Crum, said of the Post Office, “It seems that we have less staff on at certain hours and it is taking longer to get through the lines there.”

“And more people are coming in,” she said at the meeting, held in Town Hall.