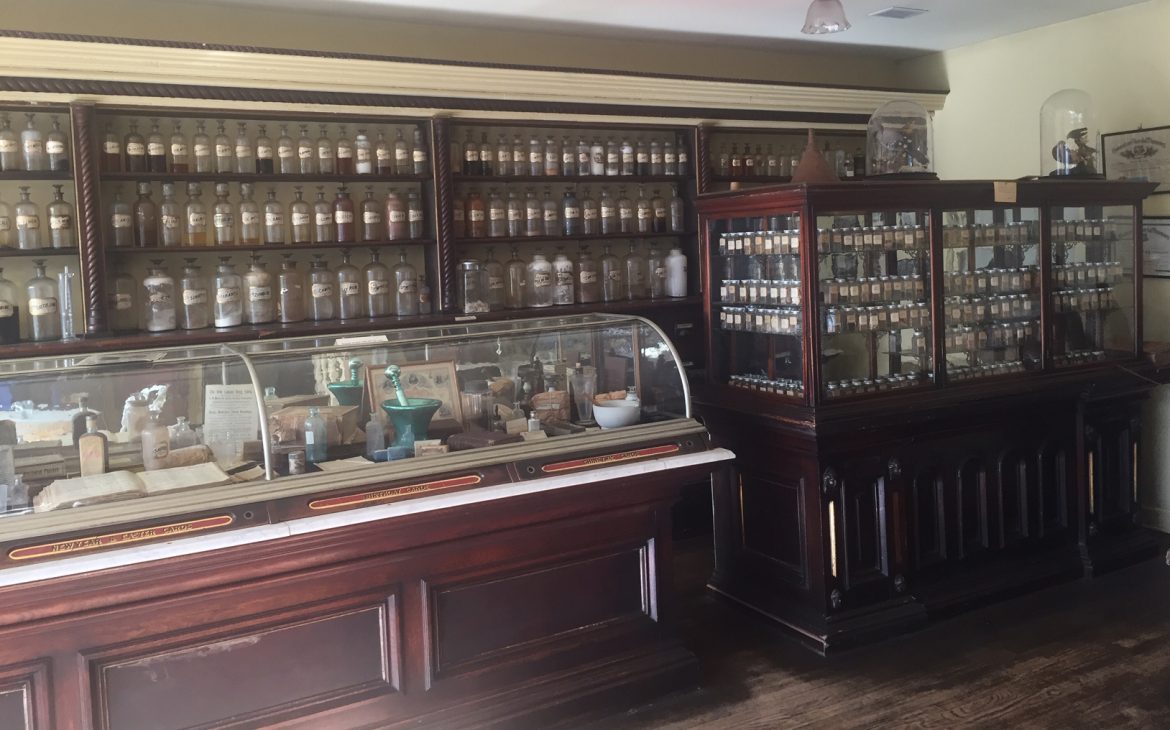 [Editor’s Note: This local history article by New Canaan Historical Society volunteer Gordon T. Walker is the first in a series to appear monthly on NewCanaanite.com.]

Most New Canaanites know about Cody’s Drug Store, which operated continuously in town from 1845 until it was demolished in 1965 for the widening of Main Street. James Cody and his family operated the store from 1918 until its demolition. The store’s contents and many of the fixtures were donated to the New Canaan Historical Society, which created a new wing for the reconstruction of what had become a beloved town landmark. Today, Cody’s Drug Store is the most well known and popular of its many exhibits and relocated historic buildings.

This composite from Syd Greenberg depicts the intersection of Main Street at East Avenue in the 1920s. Albert Franco’s original grocer is located on the right, on the site we all know as the Varnum’s Pharmacy (no more). Cody’s is on the left. This is said to be the first street light in New Canaan. Photo courtesy of the Franco family

In its early days, the drug store was operated by Samuel Silliman, who was also the Town Clerk. The selectmen, perhaps being of like party affiliation, authorized him “to sell spirituous and intoxicating liquors at his drug store… for sacramental, medicinal, chemical and mechanical uses only.” Unfortunately, the Sons of Temperance, no doubt concerned about the definition of “medicinal,” successfully petitioned the town to rescind Silliman’s license. While there is no record of the subsequent sale of intoxicating liquors at the drug store, it soon became the source of other comforts.

By the later part of the 19th century the drug store, now owned by Lucius Monroe, had become something of a social center of the town. It had a soda fountain with a marble counter, homemade ice cream, round ice cream parlor tables and chairs, hair oil for men, women’s cosmetics, mortars and pestles, Magic Hoodoo Ant Paper, various powders and fragrances, bottles, stuffed birds, jars of rock candy and licorice, cigarettes, cigars, snuff, school supplies and toilet paper. It had an early typewriter, a brass cash register, a scale and the first telegraph in town. It was the unofficial Democratic Party headquarters.

In summer, the drug store stocked items for the visitors from the big city including scenic postcards and chinaware inscribed “Souvenir of New Canaan.” In winter, the male residents of the town gathered around the drug store’s pot-bellied stove to gossip, brag and tell lies. After the death of a prominent local citizen, several men were sitting in the drug store speculating about “how much he left.” One of them, Mr. Junius Benedict, answered succinctly. “Well, I can tell you that. He left it all.”

Perhaps the most fascinating feature of the drug store was a grouping of glass-front cabinets displaying shelves of patent medicines, over-the-counter cures and potions mixed and bottled by entrepreneurs, few of whom were doctors. Patent medicines were unregulated and were marketed with lavish and imaginative claims of efficacy. They were largely responsible for the early growth of the advertising industry, which produced ubiquitous colorful posters and magazine and newspaper ads, all making wildly fanciful representations.

Many of the names and descriptions of these drugs were highly entertaining. The Cody Drug Store has bottles containing:

Certain of the claims for these medicines were undoubtedly true. Nervine, an anti-anxiety drug, contained 15.2% ethyl alcohol, guaranteed to have a calming effect. Avena Sativa, marketed for “pain, nervousness and sleeplessness” was, of course, cannabis. Pas Avena, a soporific and sedative was 15% alcohol and even Dr. Hand’s General Tonic for Children was 6% alcohol. Other patent drugs contained comparable doses of alcohol and, in some instances what would today be controlled substances. A top seller was Tincture of Opium, better known as laudanum, the favorite anti-anxiety medication of Victorian ladies. Laudanum also contained morphine and codeine and was claimed to relieve menstrual cramps, to check “excess secretions” as well as to induce sleep in babies. It was not only a narcotic, but was a staggering 45% alcohol. Although there is no record of its sale, cocaine, considered to be a cure for cancer and lesser maladies, was almost certainly dispensed. (It was also a constituent of the original Coca Cola formulation.)

The heyday of patent medicines was the mid- to late-19th century. They were finally outlawed by the Pure Food and Drug Act in 1906. The Cody family, recognizing their historical significance, kept the patent medicine bottles on display throughout their stewardship of the drug store, preserving a marvelous trove of nostalgia for the town.

3 thoughts on “‘Pink Pills for Pale People’: A History of Cody’s Drug Store”