Members of New Canaan’s local traffic authority voted at their most recent meeting to leave the outdoor dining barriers up on Elm Street until a plan to make some of the areas more permanent with wider sidewalks is in effect.

The Police Commission as part of its 3-0 vote also backed a plan to remove the barriers from Forest Street on Oct. 31.

It would be disruptive to remove the temporary white plastic barriers on Elm Street while visitors to downtown New Canaan still are enjoying outdoor dining, according to Chair Paul Foley.

The Commission and others in town “like to see” the activity, which makes for a livelier and more successful business district, he said during the appointed body’s Sept. 15 meeting, held via videoconference.

Yet on Forest Street a wider sidewalk that allows for increased outdoor dining is already in place, Foley noted. 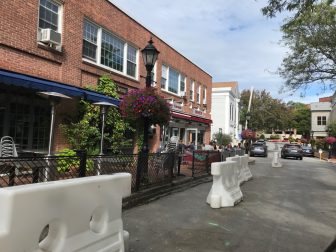 “They were put in years ago for that purpose,” he said. “And they have accomplished that purpose. And now that we are sort of through this crisis, health crisis, that it’s time to remove those barriers, get back the parking on the right-hand side. Get some more parking there and move forward.”

Foley, Commission Secretary Jim McLaughlin and member Shekaiba Bennett voted 3-0 in favor of the barrier plan. The commissioners said they could revisit the issue at their Oct. 20 meeting if something changes.

The vote came following a wider discussion about the barriers in downtown New Canaan.

Created in May 2020 in the early weeks of the COVID-19 pandemic, the water-filled barricades on Main, Elm and Forest Streets have allowed restaurants to expand onto the sidewalks while creating pedestrian walkways in the street. The Commission has extended use of the barriers periodically in the past 18 months, amid the lingering pandemic and in the face of past restrictions—now lifted—regarding capacity limits inside businesses, including restaurants.

This spring, the Department of Public Works came forward with a plan to widen sidewalks on part of Elm Street that would see some restaurants—such as elm, Le Pan Quotidien and Dolcé—get more outdoor dining permanently. Approved by the Police Commission as well as the Planning & Zoning Commission, the plan will not reduce the overall number of parking spaces on Elm, officials have said, and will come with the designation of new 15-minute spaces. 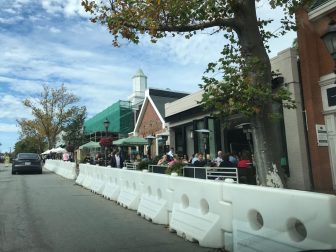 The barriers on the north side of Elm Street near the intersection of South Avenue, on Oct. 3, 2021. Credit: Michael Dinan

Laura Barker, owner of elm restaurant, said the feedback from patrons on the barriers and outdoor dining has been “very positive.”

“We feel that visitors who come to town that see full patios gives off the impression fo a lively thriving town and that’s great for all businesses,” she said. “And that creates buzz for town in general. And in addition, as we enter in the fall and early winter months, we feel like winter dining should be an option that’s available as well as people have different comfort levels with COVID. So with cold and flu season, people like to know that they have that option. And we really don’t know yet what flu and cold season will bring yet. We will have heaters, we have blankets.”

Not all Elm Street restaurants now benefitting from the increased outdoor dining space stand to get a permanent solution in the form of wider sidewalks—for example, the barriers near the front of Rosie and Chef Luis are to be removed.

Public Works Director Tiger Mann said that the town plans to create the wider sidewalks on the north side of Elm Street this fall.

“The contracting community is extremely busy,” he said. “So I’m trying to slot it in where I’m not going to pay an arm and a leg. Somebody will come and do it for me. I’d rather have it that they want to come and do it. That they’re hungry. Right now nobody’s hungry. So we are trying to slot it in and get it in by the end of this season, at least on the northern side. We may not be able to get to the southern side. But we can get the southern side in. And then at that point in time, remove those.”

Mann has said in the past that there’s an issue with a transformer near South and Elm that may delay the work of bumping out the sidewalk in front of the CBD store.

Laura Budd, executive director of the New Canaan Chamber of Commerce, said that wile many restaurants are eager to keep the barriers in place to ensure more outdoor dining, there are also retailers who are eager to see the restoration of much of the parallel parking lost to the new configuration.

Elm Street Books owner Susan Rein said that while she likes the liveliness that increased outdoor dining has brought to the downtown, the barriers themselves could be more attractive.

“My real concern is the aesthetics of the barriers,” Rein said. “I would be in favor of continuing the barriers for a long time, but can we make them a little more attractive? I am sure some people would gladly pay to have them changed to something else besides these white plastic things since there are so many of them. New Canaan’s main asset is its cute little Elm Street and cute little Forest Street and cute little Main Street. It doesn’t look so appetizing to me right now with these white barriers up and down the street. Lots of retailers that I have talked to agree, and we would be glad to participate in getting them to look better.”

Tucker Murphy, a staffer in First Selectman Kevin Moynihan’s office, said that “if you all come up with something that you think would work, we all would love to hear it.”

McLaughlin asked during the meeting whether past executive orders from the governor regarding indoor capacity limits or spacing are still in place.

Murphy said, “We are not operating under any sector rules, however, there was a bill—I spoke with our legal counsel today on this just to find out exactly what we were obligated to—what our present status was for the outdoor dining, and I had a brief conversation with him this afternoon and he said unfortunately—and he was racing to pick up one of his kids—he said it’s not a quick and easy answer. There is a bill that does allow for outdoor dining to stay place and modifications to be made that is in the process of being passed, however there are some ADA complexities with that that still need to be addressed. He promised me that he would get me more of an answer tomorrow morning. He said clearly if the municipality feels they want to keep it in place, he thinks we can, but he’s not entirely sure how the governor’s rules apply to this at this time.”

It wasn’t clear what bill Murphy referred to, or whether she was making reference to a federal investigation into a complaint that the town of New Canaan is in violation of the Americans with Disabilities Act for failure to place restrictions on restaurants and shops that are extending onto sidewalks. (NewCanaanite.com‘s first article on the investigation was published hours after the Commission meeting.)

Foley said in response, “I see no ADA issues here. There were no ADA issues before COVID. There are no ADA issues today, that I can see. If I am wrong, please tell me. What I am trying to do is create more parking on Forest Street and to solve a parking problem there. I understand there are issues on Elm. But we are going to get back to normal there, too, with the bumpouts.”