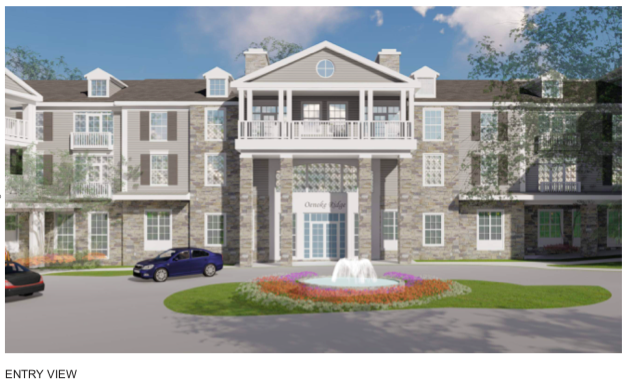 Saying a proposed residential retirement complex would loom over New Canaan’s Historic District, members of a local nonprofit organization dedicated to preservation said this week that they’re opposed to it.

The three-story complex planned for 65 Oenoke Ridge “will dominate the view looking north from God’s Acre, and simply overpower the Historical Society campus and St. Michael’s Church,” according to a Sept. 30 letter to the Planning & Zoning Commission from Neele-Banks Stichnoth, president of the New Canaan Preservation Alliance Board of Trustees.

“The view looking south from St. Mark’s Great Lawn, which, incidentally, was designed to merge with the rural aspect of the Historical Society buildings, will now be interrupted by the two city blocks-deep, 450 foot wide façade, designed without regard to surrounding residential architecture.”

The Historical Society itself supports the project from Waveny LifeCare Network, which would acquire a single-family home that the Historical Society owns and combine it with another parcel in order to create a complex with 28 one-bedroom and 42 two-bedroom units. As part of its application, Waveny is proposing that an “overlay zone” be added to the New Canaan Zoning Regulations to make the project possible.

“The Oenoke” is to allow local seniors “to maintain their independence while providing supportive services and guaranteed access to the full range of care services that form the heart of the Waveny LifeCare Network’s mission,” according to Waveny Board Chair Tom Ferguson and Vice Chair Kathleen Corbet.

“The proposed community will operate as a Continuing Care Retirement Community following the well-established pattern of many successful and vibrant communities across the nation,” they said in an open Sept. 20 letter addressed to the New Canaan community. “It will be fully owned, developed and operated by Waveny and will support Waveny’s not-for-profit mission to serve. The community will include many on-site services, recognizing the accessibility challenges faced by seniors today. Pricing will compare favorably to other CCRCs and will be set to cover the costs of operation and financing and depreciation to ensure long-term financial sustainability. There will be no outside investors expecting or receiving financial returns. All funds remain in the New Canaan community.”

According to Stichnoth’s letter, though senior housing itself is “an admirable cause that most New Canaan residents support,” the issues with the current application are “where to site a senior residential complex, and what impact it will have on the community character that brought us all to New Canaan in the first instance, and whether the location enhances or reduces the value of adjacent residential properties.”

“The proposed Waveny CCRC is simply too massive for the site, and the three-story, two blocks-deep building will loom over the Historic District and destroy its rural historic character and sense of ‘place.’ Visualize the exterior lighting at night, and how the building will look in the day with new landscaping after 30 plus mature trees are cut down for construction.”

The St. Mark’s Episcopal Church vestry voted recently not to support the application, though it isn’t clear whether the church will actively oppose it. P&Z is expected to take up the application at its Oct. 29 meeting. (The full application can be found in the dropdown menu here.)

According to Stichnoth, the Oenoke Association—a group representing condominium owners on Heritage Hill Road—is opposed to the application.