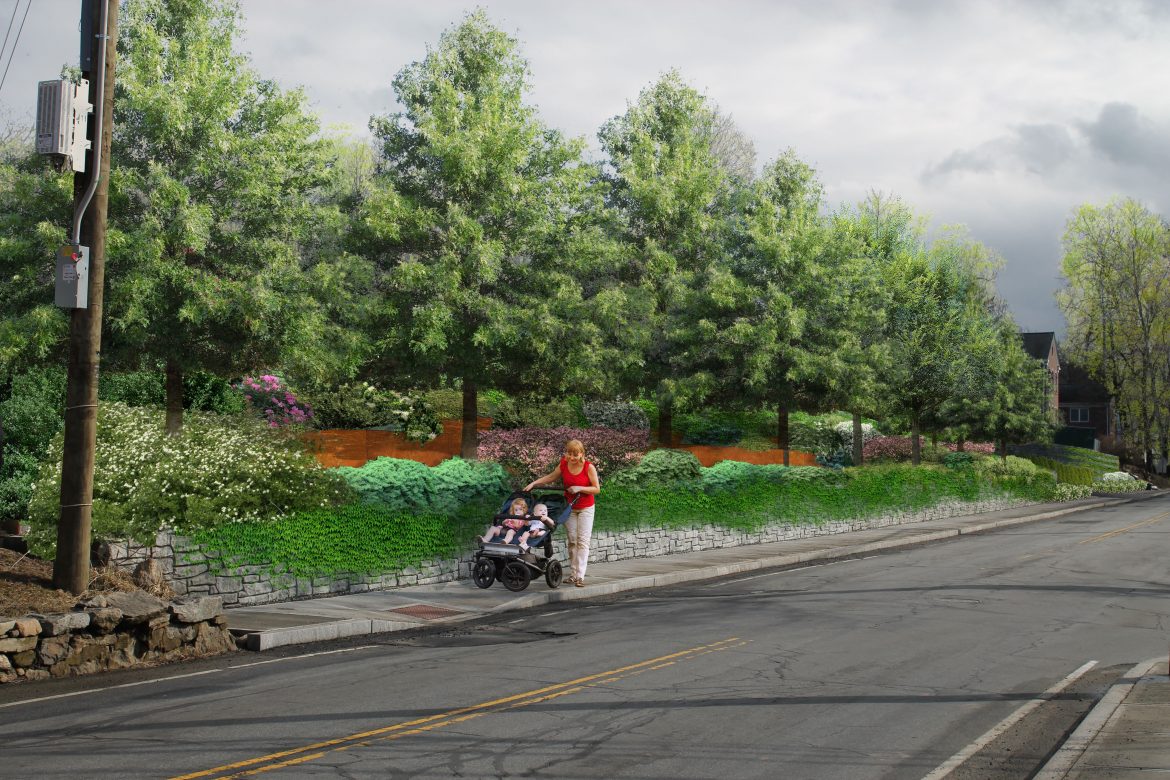 The developer of a widely discussed 110-unit condo-and-apartment complex to go up on the edge of downtown New Canaan is earning praise from town officials after agreeing to pursue a more robust landscaping plan that will effectively hide a series of retaining walls that some have criticized as unattractive.

The retaining walls fronting Park Street will see a combination of plants that will hang down over a lower wall—itself to receive a treatment that will develop moss and so break up its monochromatic appearance—and ivies that will grow up other walls, as well as junipers and other trees, according to Arnold Karp of Karp Associates, developer of Merritt Village.

“What we are going to look at it is things that cascade down over the wall that is against the sidewalk and things that will grow up on what is the second wall,” Karp said Tuesday night during a regular meeting of the Planning & Zoning Commission, held at Town Hall.

“There has been some confusion about those walls. Those walls have always been in the design. The only change was that after the hearing was closed, one of the 65 conditions was that we put in a sidewalk, but it was always considered that we would leave space, so there was always a question about the height on those walls. They will be all within Planning & Zoning guidelines, as approved, and we think with moss and some different planting methods that we are going over with our landscape architect, we are pretty sure that we can make this visually appealing and take it out of the public domain that it’s been in.”

Karp said his firm is working with local landscape architect Wes Stout of Wesley Stout Associates and that he expects the “beefed up” planting plan to begin materializing in the spring.

“This is to show the Commission that we heard your concerns and we will work with Commission and subcommittee to make sure that this isn’t something that takes a life of its own,” he said. “We are only 5 percent out of the ground. At the appropriate time, we will discuss moving the planting plan, which is usually done at the end of a project, to see if we can irrigate it and get this done in the planting season of 2019, so long before the rest of the project will be done so the Park Street vista will be improved and taken care of.”

Goodwin on Tuesday described what came out of the meeting as “some positive developments and movement forward.”

“The first Comment I would make is that as far as I know we have no other significant issues with how this project is coming along,” he said.

“The second point I will make is this is an approved project so let’s not forget that. The third point I will make is that Arnold has voiced his concern that we will try to over-manage his project, and I said to Arnold that is not the intent of this Commission. And I also advised Arnold that to mitigate that risk—and this is project biggest in town, this is a project that can take up some bandwidth of the planner, it’s an extremely important project in town—so I have encouraged Arnold to keep Lynn in the loop and as you are coming along and if you feel you are making some changes to the project that might concern the Commission, talking about the Commission, not other constituencies, to let Lynn know.”

If the landscaping plan rolls out as expected, the accord reached by Karp and the Commission would appear to put to bed the questions and criticism that have surrounded the retaining wall since it began to take shape in October. In written correspondence between the two parties and multiple public meetings, as recently as last month, P&Z questioned whether the developer was following approved plans while Karp reiterated—as he did again this week—that he was. Dozens of residents wrote letters to P&Z criticizing the wall as ugly (not everyone felt that way), while Karp asked that the project get a bit further along before people give their critiques.

On Tuesday, Goodwin appointed the group that met with Karp earlier this month as an official standing committee to work with the developer and Stout as the planting season approaches.

Commissioners during the meeting asked Karp and Karp Associates COO Paul Stone about a rust-colored material that appeared in a rendering amid the retaining walls (a steel divider that the landscape architect is considering in order to bring in more plant species and focus more screening on the wall), how mature the trees pictured would be on “day one” of their planting along the retaining wall (close to what is pictured, as per approved plans that had such trees closer to the Merritt Village buildings) and whether there’s enough room between the walls to realize the planting plan depicted in the rendering (yes).

Commissioner Dan Radman said that the renderings that show more robust plantings “go a long way to softening the view.”

He asked about the possibility of “staining” the poured concrete retaining wall itself.

“he whole dislike of the look is not necessarily the texture, because it’s a stone texture, but it’s the uniformity of it all being in a neutral  gray concrete color instead of what you see in a fieldstone wall,” Radman said. “Any consideration given to doing some strategic staining of the wall just to kind of help make it go away even more?”

Stone said yes, though because they’ve seen some staining that was not successful, the planting plan seemed like a better first option.

Karp noted that once a wall is stained, “you can never really change it.”

“It’s impregnated through the core substance, so our thought was through trial and error to try buttermilk for moss so we would see variations in color and texture,” he said.