The widely discussed retaining walls built at the Merritt Village construction site on Park Street are consistent with approved plans, and criticisms from detractors are misguided, according to the project’s developer. 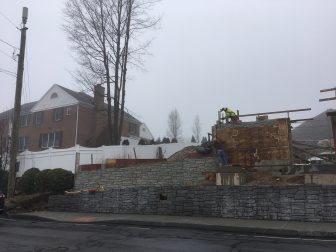 In a reply letter to the Planning & Zoning Commission, Arnold Karp of property owner M2 Partners said he disagrees that the walls “are not in keeping with the spirit of the descriptions and drawings of the application for this project.”

Referring to a Nov. 20 letter from P&Z, Karp acknowledged that submitted and approved plans made no specific reference to “faux stone” in retaining walls, yet they also make no reference to “fieldstone.”

“In fact, the Conditions of Approval only seem to reference any materials at all in one or two instances, and certainly not pertaining to the insignificant retaining walls,” Karp wrote in his reply letter, received Dec. 24 at Town Hall.

“The approval for this project included the imposition of conditions regarding the use of plant screening along Park Street, but nothing regarding the retaining walls. In reviewing the images presented to the Commission during the hearings and the application, the wall construction in place seems to mirror them. As we stated at the October 30th meeting, and we will reiterate now, these walls are a minor part of the project and the entire project will be fully planted at the appropriate time. Additionally, the currently unfinished retaining walls will be capped and partially hidden by the Town’s required planting plan. This will include the use of vine planting material above the wall that will grow over and down in a ‘cascading’ type of effect that will obscure much of that lower wall, for those who are not enamored with the look.”

P&Z approved the 110-unit Merritt Village project in November 2016, with dozens of conditions.

The retaining walls on Park Street have drawn sharp criticism since they materialized three months ago, and Karp has appeared before both the Town Council and P&Z to address it. Even so, P&Z has said it was led to believe the walls would have at least a fieldstone finish, and at its most recent meeting mulled the idea of withholding building permits for Merritt Village until its concerns regarding the retaining walls have been addressed. (All building permits were issued as of Dec. 21.)

Karp said in his letter that “this issue is taking on a far larger perceived importance and impact than it deserves, especially at this early part of the overall project.”

“The concern regarding this wall is just another issue for those who are unhappy regarding the changes in New Canaan,” he said. “To those opposed to housing changes in general this wall issue appears to be something for them to latch on to. If the same amount of time and effort spent by the detractors were used in a constructive manner, the Town of New Canaan could have many more volunteers.”

Karp said M2 Partners declines to apply a 4-inch thick fieldstone veneer to the wall, as suggested by P&Z, noting that such would come “at a substantial additional cost.”

“While others have incorrectly stated that ‘stone veneer’ is shown on the approved plans, this is just not correct,” Karp said in the letter. “It is neither reasonable, nor fair, to be judged on what certain Commission members, or even members of the public, feel is the proper aesthetic. The principals in this project have a long track record, not only in the Town of New Canaan but in the surrounding areas, of building high quality and aesthetically pleasing and award-winning projects.”

He added, “We, as the developer, are investing over $80 million (the largest private investment in the history of the Town) in this project and it is our professional opinion that we are not only following the plans but that this project does not violate or alter the Commission’s approval.”

25 thoughts on “‘Merritt Village’ Developer to P&Z: We’re Building What You Approved”