The Parks & Recreation Commission on Wednesday night elected Rona Siegel as chairman of the advisory body. 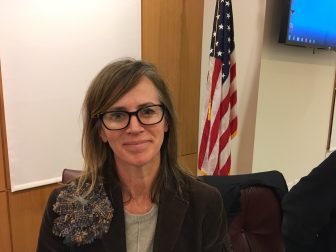 Voting 8-0 with two people abstaining, the Commission cast its vote during an organizational meeting at Town Hall, conducted by First Selectman Kevin Moynihan.

Sally Campbell, who has served as Commission chairman since May 2013, said prior to nominating Siegel that she would remain in the group through the year but that she would not seek the chairmanship.

Campbell continued, saying, “I think it’s time for a change and change is always good, so I just wanted to put that out there. And if I can I would make a recommendation for chair, that would be Rona Siegel. She came onto the Commission two years ago and she has been very impactful since then and there has been nothing that she’s taken on that she has not done brilliantly. And she has the time and the interest and I think the intelligence to do a great job.”

Siegel herself abstained from the vote, as did Commissioner Jack Hawkins, who had asked whether Commissioner Doug Richardson would agree to serve as chairman if elected. Citing health reasons, Richardson declined. Commissioner Gene Goodman was late to the meeting.

The Commission voted 11-0 to re-elect Francesca Segalas as secretary.

Toward the end of the meeting, Commissioner Hank Green told Campbell that she has been “an exceptional chairperson,” and said he looked forward to working with Siegel.

Campbell told her fellow commissioners, “You guys have been great,” and noted that she would remain on Parks & Rec through year’s end.