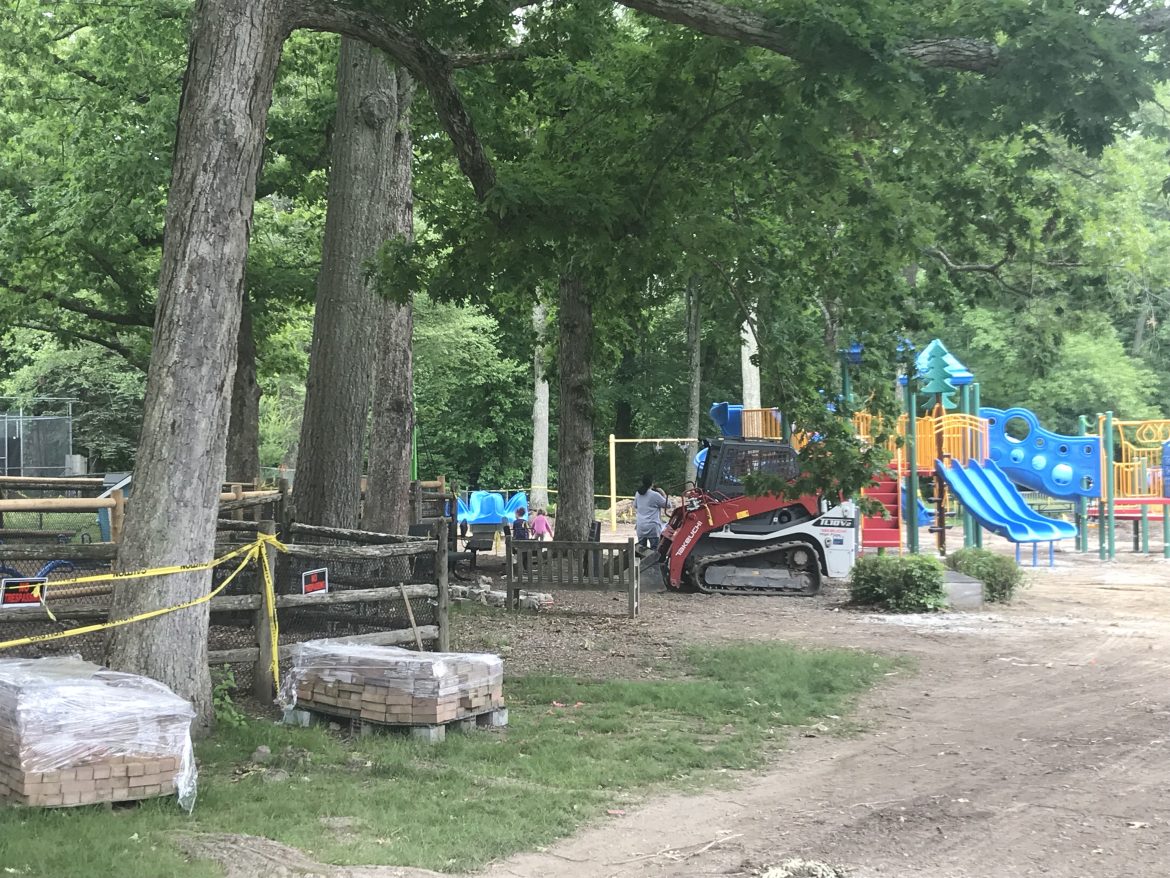 Officials voted to approve a contract with Gannon Rustic Fence for the replacement of a fence around the toddler playground at Mead Park. Credit: Olivia Flaherty-Lovy

As part of a larger Mead Park playground project, officials voted last week to approve a contract with a New Canaan-based company to replace a fence at the site.

A joint effort of the town and a nonprofit organization to replace the main playground structure as well as introducing a new rubberized surface is “well underway,” according to Recreation Director Steve Benko.

The adjacent toddler playground at Mead also got new equipment, and the committee overseeing the project “has recommended that we replace the old fence with a new fence” there, Benko told members of the Board of Selectmen at their June 4 meeting, held in Town Hall.

First Selectman Kevin Moynihan and Selectman Kit Devereaux voted 2-0 to approve a request from Benko to enter into a contract with Gannon Rustic Fence for $6,370. Selectman Nick Williams was absent.

According to Benko, Gannon Rustic Fence installed the original fence at Mead Park 22 years ago and the town has used them for numerous projects in New Canaan since then. “They do a good job for us, and they’re local,” he said.

Meanwhile, the widely anticipated installation of a new main playground structure and replacement of wood chips with a “Poured In Place” rubberized surface is nearly finished.

The town decided to replace the playground in response to the deterioration of some features of the 20-year-old structure and as part of an effort to encourage more young families to come to New Canaan, the same way many New Canaan residents bring their children to Ballard Park in Ridgefield.

One of the driving forces behind this project is the desire to make the playground more accessible for children with disabilities.

“We encourage a space that empowers children to have meaningful and accessible play, regardless of ability,” according to the Friends of Mead Park Playground page on the New Canaan Community Foundation website. “There will be an access ramp and special equipment that accommodates mobility devices. We are committed to our mission of reinventing Mead Park Playground as a play space of inclusivity, thoughtful design and engaging play.”

Due to the extremely wet weather earlier in the year, the installation of the playground was delayed from the fall to this spring to minimize the risks of the new Poured in Place surface “opening up,” Benko said in October. Now, the final project is expected to be complete in the coming month.

“Weather-permitting, it should be done in the next two and a half weeks,” he said Monday.

The replacement of the fence is only one part of a much larger project that has been underway for years. Started by New Canaan moms Allyson Mahoney and Monica Chimera, the Friends of Mead Park Playground group raised funds for and heavily contributed to the development of the playground. The group worked in conjunction with the New Canaan Community Foundation and raised more than $200,000 for the project.