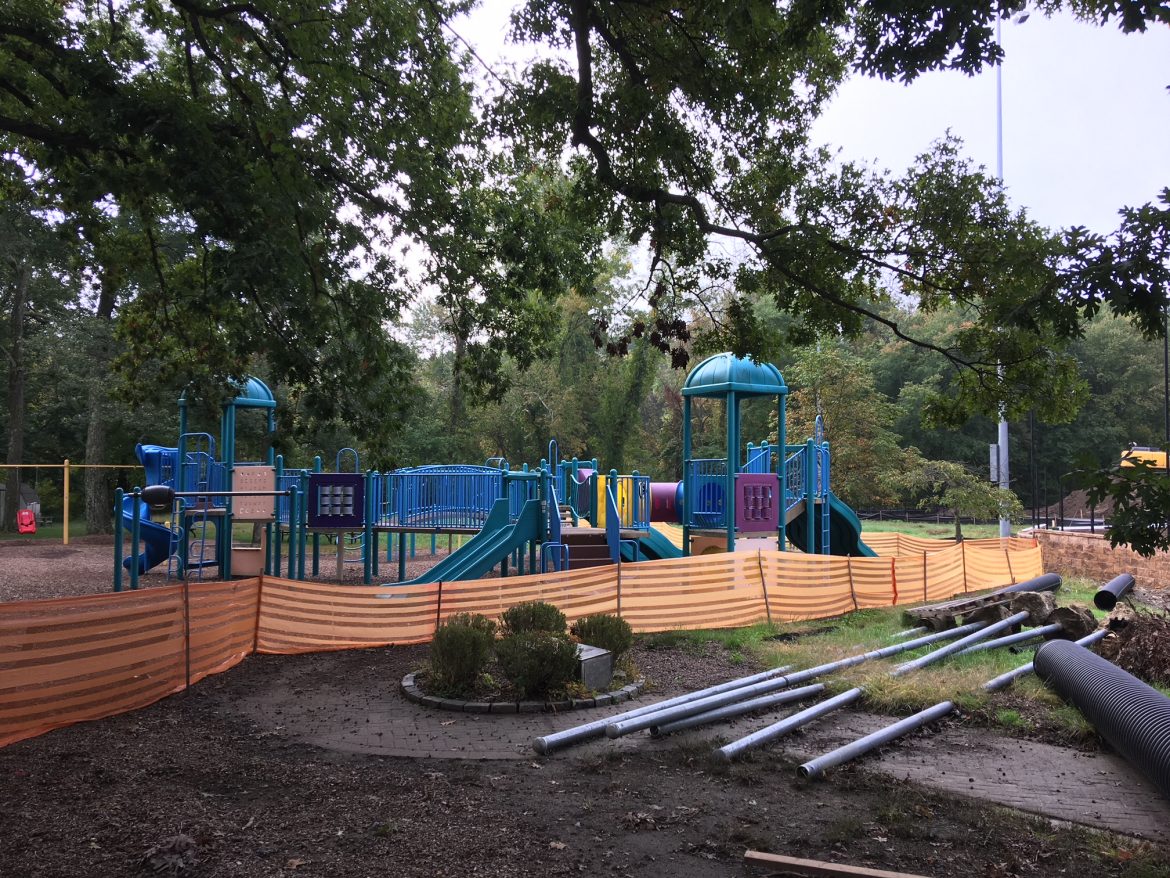 The extremely wet fall weather has set back the baseball fields project at Mead Park, officials said last week, and one knock-on effect of that is a delay in the installation of a new playground area that now is not expected to open until the spring.

Though the New Canaan Baseball project at Mead is “pretty much on schedule,” Recreation Director Steve Benko said, “the weather set them back” and there have been “some days they could not work, it was just too wet.”

It’s “critical” for New Canaan Baseball to get its paving done before a “Poured In Place” rubberized surface for new playground equipment at Mead is installed, and the contractor on the job has said the earliest he could start would be mid-November, Benko told members of the Parks & Recreation Commission at their regular meeting.

“He said he’s is a little leery of that because once you get into December, the Poured In Place material is temperature sensitive,” Benko said during the meeting, held at Lapham Community Center.

If the rubberized material is installed before the hardscape, there’s a risk that seams open up in it, Benko said.

Referring to a contractor hired by Fort Wayne, Ala.-based GameTime, Benko added: “So the contractor felt it would be in our best interests to get the best possible job of surfacing if we could push off the installation the playground to the beginning of April. Then, he said, you’re not chasing the cold and you will do a good job with the surfacing. So that is the recommendation from the contractor. He said if you want me to come in, I can do it, but I can’t guarantee that I would get the surface down. It’s easier to put the Poured In Place material down, they come back install the equipment on top of it.”

A collaboration between the town and Friends of Mead Park Playground–a private effort overseen by two New Canaan women that’s seen more than $200,000 raised thanks to scores of individual donors as well as generous local businesses and nonprofit organizations—the remade play area is to replace aging, deteriorating equipment.

The heads of Friends of Mead Park Playground, Monica Chimera and Allyson Mahoney, have said in the past that a target launch date of this fall depended largely on the timing of the baseball fields project.

Commission Chair Sally Campbell said at the meeting the the nonprofit organization’s leaders are eager for the work to be done the right way. The current playground equipment will remain in place for families’ use through the winter, Campbell said.

Commissioners asked Benko whether the equipment now being stored at Mead Park for the playground project will remain there (yes, it will be covered in plastic and tarps), whether it’s under warranty (yes) and whether those who have supported the project will be contacted directly by Friends of Mead Park Playground or if Parks & Rec should do that (they will).

Despite the overall delay for the playground, workers would put in the new walkway and donor plaza now, Benko said.