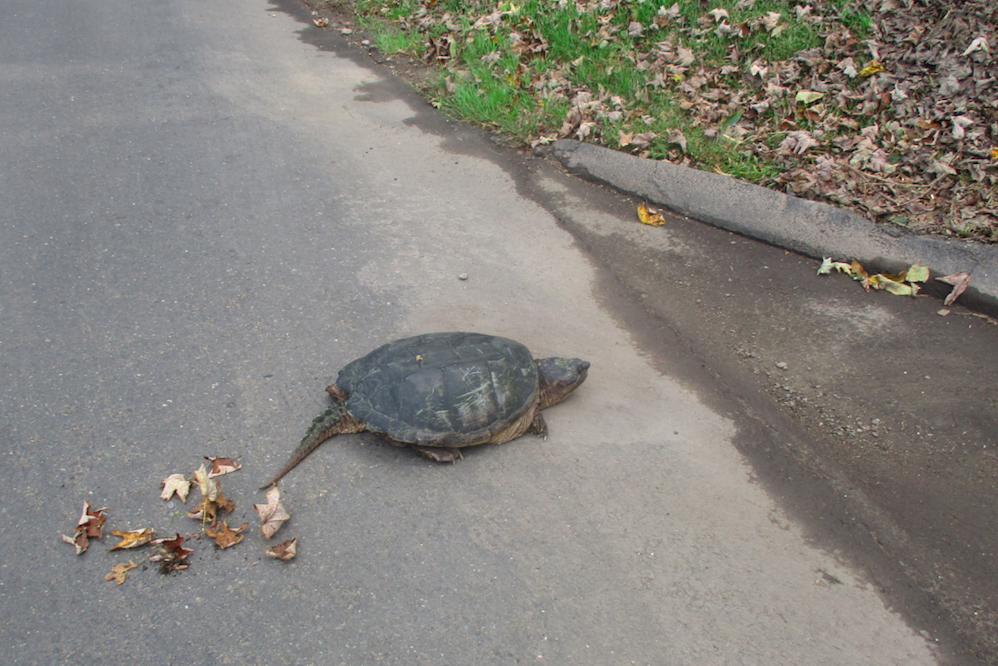 A snapping turtle crossing Valley Road in New Canaan on Oct. 10, 2018. Photo published with permission from its owner

Town officials say they’re receiving an unprecedented number of reports regarding turtles out and about in recent weeks—a phenomenon that experts attribute to an unusually high water table.

Though Animal Control keeps no formal count of snapping and painted turtle sightings, Halm said they’ve come in recently from areas including Long Lots Road, Carter Street, Greenley Road and Chichester Road. A concerned resident on Huckleberry Hill Road on Wednesday stood out to protect a turtle as it crossed Valley Road, she said.

Dara Reid of Wildlife In Crisis, a 30-year-old nonprofit organization that serves Fairfield County, said she’s seeing about double the number of snapping turtles hit by cars than usual, including one that’s about 50 years old.

“It is probably due to the high water table,” Reid said. “They are always on the move this particular time of year, though we are seeing them more than usual.”

Reid added that birds are migrating and much wildlife, including squirrels and foxes, are on the move.

It isn’t clear whether the high incidence in turtle sightings is happening statewide. Officials with the Connecticut Department of Energy and Environmental Protection could not be reached for comment.

According to DEEP, snapping turtles mostly nest from late May through June, and rarely leave the water except during breeding season, when females will find a place to dig and lay eggs—typically within a mile from a water source. They’re born from starting in August and through October.