Fotis Dulos killed his estranged, fearful wife on the morning of May 24, 2019, in the New Canaan home where she and their five kids had been living for more than one year, according to a state police detective’s sworn affidavit made public Tuesday.

He’d left Farmington at daybreak that Friday morning in a pickup truck and took the Merritt Parkway to New Canaan, pulling off of Lapham Road alongside Waveny and then pedaling to her Wells Lane home on a bicycle from his own childhood that he’d brought to the United States when he moved here from his native Greece, according to an arrest warrant application (see PDF below) from Detective John Kimball of the state police Western District Major Crime Squad.

Once at the house, Fotis Dulos laid in waiting for her, officials have said. The last known image of Jennifer Dulos alive is captured 8:05 a.m. by a neighbor’s video surveillance system—she’s driving her SUV home after dropping the kids off at school.

A subsequent analysis of the garage, house and SUV by the state’s chief medical examiner, including bloodstains, blood spatter and blood loss, led the state official, Dr. James Gill, to determine that Jennifer Dulos sustained an injury or injuries that would be “non-survivable” without medical intervention. Gill categorized the event as a “homicide of violence” where 36-inch zip-ties were used “to secure and incapacitate Jennifer Dulos for some time period” to prevent her escape. The murder itself likely included “some combination of traumatic, blunt force injuries such as a bludgeoning/beating and/or sharp-force injuries such as a stabbing/slashing,” according to Kimball’s affidavit.

Fotis Dulos then “packages” Jennifer Dulos at the house, “using plastic zip-ties and places her inside her own” SUV, then “cleans the garage using supplies he finds in the garage and paper towels from the kitchen,” Kimball said in the arrest warrant application.

A nanny would arrive about an hour after Fotis Dulos left with his estranged wife’s body, apparently on the passenger seat of the SUV that he reverse into a space off of Lapham Road, near where’d parked the pickup that morning. Back inside the house, Lauren Almeida found Jennifer Dulos’s unopened granola bar and mug of tea on the kitchen counter, and noticed that a paper towel roll near the sink needed to be replaced. Almeida found it “incredibly strange” that there were just two fresh rolls of paper towels left in the pantry, since she’d stocked it with a brand new 12-pack the night before.

Almeida soon picked up four of the Dulos kids and they ate lunch in their own kitchen. At that point, no one knew their home was the scene of a violent crime—it was still several hours before Jennifer Dulos, usually responsive to phone calls and texts, would be reported missing to police.

On discovering that Jennifer Dulos hadn’t shown for a children’s orthodontist appointment at 4:40 p.m., Almeida said her “first thought was that Fotis did something,” that “something happened and that Fotis was most likely involved,” according to Kimball’s affidavit.

He was, according to newly released details of a months-long local, state and federal police investigation.

On Tuesday, state arrested Fotis Dulos—already charged twice with felony tampering and hindering for what appear to be botched cover-up jobs—on charges of murder, felony murder and kidnapping. His one-time girlfriend Michelle Troconis, also charged twice with tampering, was arrested for conspiracy to commit murder, as was a friend, Connecticut attorney Kent Mawhinny.

New Canaan Police, minutes before issuing a brief statement saying that Fotis Dulos had been arrested on Tuesday morning, posted a single word to the agency’s Twitter account: “Justice!”

A friend of Jennifer Dulos’s family issued the following statement in the wake of this week’s arrests: “Above all we thank the Connecticut State Police and the New Canaan Police Department, as well as the assisting local departments for their tireless commitment and diligent, painstaking work that have led to these arrests. Although we are relieved the the wait for these changes is over, for us there is no sense of closure. Nothing can bring Jennifer back. We miss her every day. We will forever mourn her loss. We believe the arrest warrants will speak for themselves. We ask that you please respect our privacy during this time.” 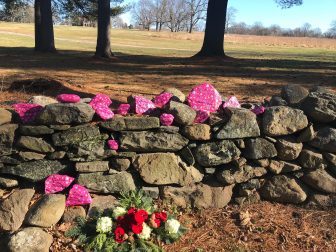 Many of those following the case have speculated as to whether or not a murder charge could be brought against Fotis Dulos even without a physical body, should authorities come to believe the worst, as it now appears.

In many ways, the new information sheds light on areas that long have puzzled those following the case—for example, the question of how Fotis Dulos traveled from Lapham Road to Welles Lane after parking near the southwestern corner of Waveny (there’s video surveillance that shows him riding the distinctive bicycle on Weed Street).

The arrest warrant applications, signed by Superior Court Judge John Blawie, also lay out Fotis Dulos’s financial difficulties at the time of his wife’s disappearance and detail for the first time the location of bloodstains and both of their DNA on several items in the home and on a car in the garage at Welles Lane.

An item that Kimball notes multiple times in the affidavit is a pair of white camping pillows that Almeida noticed in the days after Jennifer Dulos’s disappearance had gone missing from the south garage bay at her New Canaan home. They’d only been used twice by the Dulos children during a school trip.

Almeida “had noticed the pillows within the past two months while searching for an old towel to use for an activity with the children,” Kimball said in the application.

The pillows appear to have become part of a sloppy “dump run” that Fotis Dulos and Troconis took the day after the murder, leading to the first charges brought against them. Police used phone location and video surveillance evidence to show that they steered a black pickup truck through north Hartford, making 30 stops to dump bags in trash cans and storm drains, including items that later tested positive for Jennifer Dulos’s blood. (Police had seized Fotis Dulos’s phone during a May 25 interview with him at NCPD headquarters—Kimball revealed in the new arrest warrant application that his passcode was 0-0-0-0.)

During the dump run, one surveillance camera showed that “several plastic bags can be seen in the rear bed the pickup” that Fotis Dulos was driving with Troconis in the passenger seat. Less than two minutes later, after turning onto a different road and making a U-Turn, the pickup truck passes the same camera and “the rear bed of the truck is seen to hold only one black plastic bag.”

An additional video from the Hartford Police Department Special Operations Group Capital City Command Center “showed Dulos remove what appeared to be a large, rigid object from the rear of the Ford Raptor and lean it up against a building.”

“The object was consistent with the appearance of a WeatherTech brand rear cargo liner determined to be missing from Jennifer’s 2017 Chevrolet Suburban,” Kimball’s affidavit said.

“[Capital City Command Center] video also showed an unidentified person removing what appears to be a light-colored piece of material containing a large blood-like stain. This item appeared consistent with one of two small camping pillows which Jennifer’s nanny Lauren Almeida reported were missing from the garage storage shelves at the 69 Welles Lane crime scene. Investigators subsequently identified and interviewed the homeless male who told investigators he had seen what he described as a ‘bloody pillow’ but he had not taken the item.”

Also new in the Kimball affidavit was a detailed list of evidence that police recovered from garbage bags that were dumped in Hartford that Saturday. The evidence includes cleanup and other items with bloodstains and DNA from Jennifer Dulos, Fotis Dulos and Troconis, including a sponge, mop handle, clear poncho, bra, Vineyard Vines striped shirt, garden glove, duct tape and zip-ties.

Most of the accusations against Troconis and Mawhinny revolve around lying to police in attempts to provide Fotis Dulos with alibis around the time of the murder, and their help in his efforts to cover up the crime by eliminating evidence. For example, Fotis Dulos had left his own cellphone back in Farmington on the morning he drove to New Canaan to kill his wife, according to Kimball’s affidavit. A friend from overseas called Fotis Dulos’s hone and Mawhinny instructed Troconis to pick it up so that the 17-second call that followed was officially logged into the system, the affidavit said.

Troconis’s involvement in the cover-up appeared to go much further, as she accompanied Fotis Dulos not only on the dump run, but was also actively helping him develop an alibi, clean up a house where he went directly after the murder, bring the pickup truck he’d used to make his trip to New Canaan to a car wash for detailing and withhold that information from an employee of Fotis Dulos’s construction company who owned that vehicle.

Both Troconis and Mawhinny changed their stories multiple times about their interactions with Fotis Dulos on the morning and afternoon of May 24.

During a second interview with police last summer, “Troconis was asked if there was tension between Dulos and herself because of his divorce and the problems surrounding it,” according to Kimball’s application. “Her response was, ‘We fight all the time.’ Detectives asked Troconis if the turmoil might be a motivating factor to get rid of Jennifer. Troconis reported that Dulos had expressed to her that he never thought Jennifer would do this to him, and that he never saw ‘this side of her.’ Troconis also conveyed Dulos had told her, ‘Sometimes I hope she disappears.’ ”

Also during a police interview, “When Troconis was told that Dulos had killed his wife and involved her [Troconis] in the clean-up, she responded by saying, ‘That’s like even worse. I hate him because of that.’ Affiant Kimball told Troconis, ‘He got you in trouble.’ Troconis replied, ‘But I was cleaning the house. I wasn’t cleaning Jennifer.’ ”