Though progress appears to have been made in the sale of a prominent, deteriorating antique home on God’s Acre—a development long sought by historic preservationists—the property remains vacant and tied up in foreclosure proceedings that have stalled its transfer. 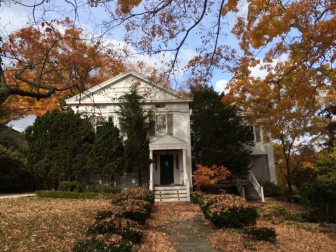 The 1780-built Greek Revival-style home at 4 Main St. is being foreclosed upon, through a civil lawsuit filed by the bank that’s been tied up in court for more than three years.

In 2013, a local couple, whose detailed plans for restoring the 10-room, 7,000-square-foot home had been looked on favorably by the Historic District Commission, made an offer on the .43-acre property that they said last March had been accepted by the bank. Two months later, officials reported that the home’s owner, Dr. James Talbot had rejected that offer.

Now, commissioner Tom Nissley said during the group’s most recent meeting—held Jan. 28 at the New Canaan Historical Society—the home is under contract and pending, and the Realtor on the sale is Alice Snyder of Wilton.

In July, a civil court issued a judgment of foreclosure by sale on the property, according to records on file with the Connecticut Judicial Branch. In October, Talbot appealed that decision, and it isn’t clear when those proceedings will conclude.

Lieto confirmed that the house is under contract, and—according to a notice published last week—a judge in the Appellate Court on Jan. 25 denied the bank’s motion to terminate a stay in the foreclosure action.

“We feel they [officials with the bank] are being unreasonable about the debt,” Lieto said.

The Bank of New York Mellon filed a civil lawsuit in July 2012, naming Talbot as a defendant, records show. According to a copy of the lawsuit’s complaint, Talbot had taken out a note for a loan in May 2007 in the amount of $2,280,000, and the mortgage on the property was assigned in October 2011 to The Bank of New York Mellon. The mortgage and loan went into default, according to the lawsuit. There are several liens on the property, the lawsuit says, including one from an eye care device provider with U.S. headquarters in Marlborough, Mass. that in March 2010 won a judgment of nearly $90,000 following its own civil lawsuit filed against Talbot for nonpayment of rental fees for a digital imaging system, according to a copy of that complaint.

It isn’t clear who the prospective new buyers are or what condition the interior of the home is in—Snyder could not be reached for comment.

Janet Lindstrom, acting chairman of the commission, noted at the meeting that a note has been appended to front door of the home—which can sometimes be an indication, she said, relaying information from a New Canaan building official, that a bank is taking over a property.

There also have been lights switched on inside the home in recent weeks, which had not been seen before, Lindstrom said.

Though the commission has discussed pursuing a blight citation on the home, Lindstrom said, that may only complicate the property’s tenuous financial state, since such a citation, if levied, comes with new daily fees levied against its owner.

One thought on “Though Under Contract, Vacant Historic Home on God’s Acre Remains Tied Up In Foreclosure Proceedings”