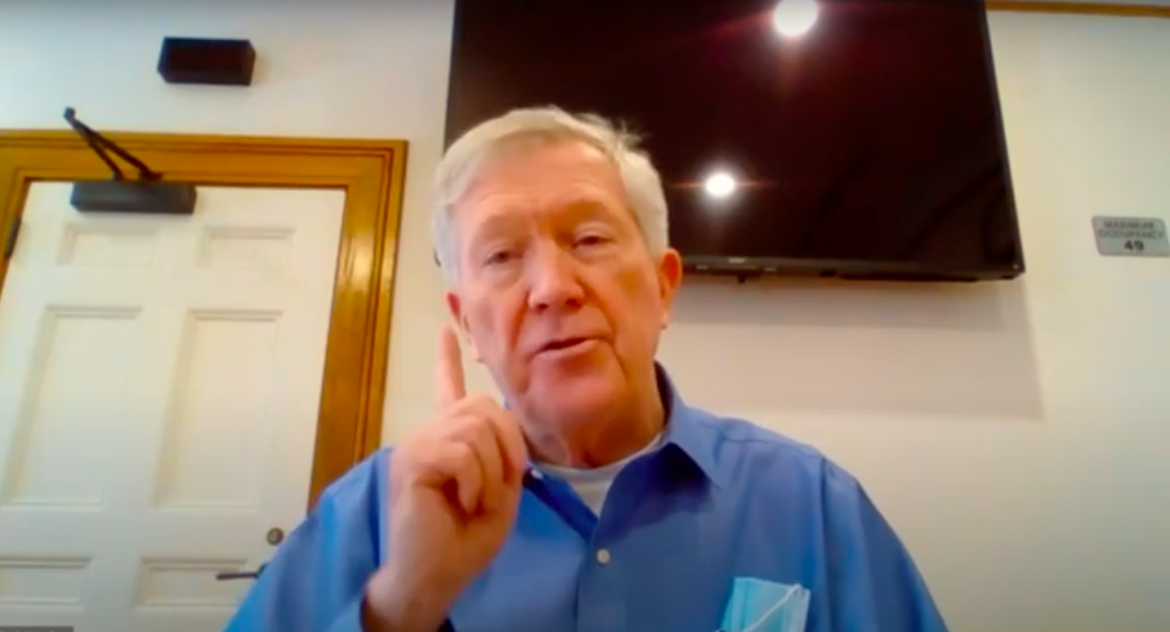 First Selectman Kevin Moynihan during the Jan. 28, 2021 Board of Selectmen meeting. Zoom screenshot

The town clerk is pushing back on characterizations that First Selectman Kevin Moynihan made last week in which he described her office as failing to digitize documents and records as other municipalities and town departments have. 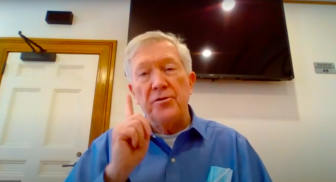 First Selectman Kevin Moynihan during the Jan. 28, 2021 Board of Selectmen meeting. Zoom screenshot

Moynihan during Thursday’s regular meeting of the Board of Selectmen said Town Clerk Claudia Weber “has not modernized” in a way that provides sufficient online access to records and that it’s been “a real hindrance” during the COVID-19 pandemic because it’s brought more people physically into Town Hall.

Weber told NewCanaanite.com that officials had her muted during the meeting and so she was unable to respond to what she characterized as “misinformation.”

“The First Selectman’s comments were misleading,” Weber said in a statement issued after the meeting. “The New Canaan Town Clerk’s office has actually often been among the ‘first’ in terms of technology over the years.”

Weber’s statement continued, “Further, while the Land Record Index has been online for a long time, due to a previously made promise to our constituents, the actual images have not. Our residents wanted their privacy protected as much as possible. Unfortunately, Covid is now going to have an effect on that. I agree with the First Selectman that our images should be placed online although we’ve had some disagreements as to the timing and methodology for implementing the project.”

The town clerk, like the first selectman, is an elected position in the municipal government. Among other duties, the town clerk is responsible for preserving records such as deeds, mortgages, liens, assignments and survey maps. The meeting records of boards and commissions are kept on file in the Town Clerk’s office. The town clerk also serves as the town’s Registrar of Vital Statistics and issues birth, marriage and death certificates.

Weber issued her statement in response to Moynihan’s comments during the meeting, during which the selectmen ultimately approved a budget of $157.7 million for fiscal year 2022, an 2.54% increase over current spending.

Selectman Kathleen Corbet at one point flagged what she described as an “operating increase from $15,000 to $46,000” and asked whether it represented “the redaction project.” Moynihan said yes.

It wasn’t clear what they referred to. A copy of the proposed selectmen’s budget, provided by the town CFO to NewCanaanite.com through a public records request, did not include the word “redaction” and had no $46,000 line item in it.

Other towns that have put municipal records online have run into problems on discovering that sensitive personal information, such as residents’ Social Security numbers, are printed on documents such as mortgages and tax liens, and have scrambled to redact that information.

Moynihan said funds for the “redaction project” are in the budget for the fiscal year that starts July 1, adding that “for the past two years I’ve been harping on the fact that we have to get more electronic.”

When New Canaan re-designed the municipal website in 2019, a vender on the job offered “new tools” for “online services,” Moynihan said, but “our Town Clerk has not modernized.”

“I think of 79 clients of our vendor, we are the only town the doesn’t have online access to Town Clerk records,” he said. “And in the time of COVID that’s a real hindrance, because we have had some employees being concerned about their health. For the most part we have wanted people to be not having unnecessary visitors come in. I think it’s been amazing to me the few visitors who have come in to pay their taxes in January. Last July, there were many more, but people have gotten the word that in order to keep Town Hall employees safe, it’s easy to mail a check, it’s easy to charge. But the Town Clerk has not done what could have been done years ago to accommodate the ability to have online access.”

If the “redaction project” started now, Moynihan said, “it wouldn’t be accomplished until August.”

“So it’s a problem of our own creation that we could have addressed earlier,” he said.

Weber in her statement concluded by saying she was “grateful to the Board of Selectmen for approving the budget request for the process that I outlined.”

“Technology can be good as long as it’s implemented responsibly,” she said.

Her statement marks the most recent example during Moynihan’s second term where he’s has been at odds with a town official in his characterizations. Earlier in the month, he disputed a report made a Parking Commissioner that a fellow member of the volunteer body had been blindsided by the town’s decision to not reappoint her. In June, then-Emergency Management Director Mike Handler said Moynihan lied about the circumstances of his dismissal from the role.

Weber, a Republican, has been the highest overall vote-getter in the last three municipal elections.