Town officials last week upheld a $30 ticket issued to a New Canaan woman who parked in a loading zone downtown. 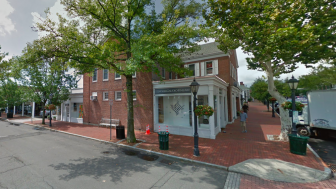 Here’s where it happened. Streetview

Sara Rehnberg told members of the Parking Commission during an appeal hearing Thursday that she thought the signs on the west side of South Avenue off of Elm Street were meant to prevent motorists from blocking the alley between an antiques store and the former Mackenzie’s space.

“That was always my understanding,” she told the Commission during its regular meeting, held via videoconference. Rehnberg was ticketed at 12:16 p.m. on April 21 (a Wednesday) for parking in the loading zone.

“I have parked there before, in the past. I have never gotten a ticket there,” she said, adding, “So I just misunderstood where you were not supposed to park. And that’s why I’m here. I parked in the wrong place and I’ll never do it again. But I really thought the sign meant, don’t park in front of the alley because you’ll block the trucks coming in and out of the alley. So that’s my story and I’m sticking to it.”

Commission Chair Keith Richey and members Laura Budd, Jennifer Donovan and Drew Magratten voted 4-0 to uphold the ticket. Commissioner Peter Ogilvie did not vote because he was not present for the appeal.

“The pictures showed her clearly parked in the loading zone,” Richey said. “Her argument basically was that she did it but she would never do it again.”

He added, “Basically threw herself on the mercy of the court and to me it’s just not an argument.”

During the hearing, Budd asked Parking Manager Stacey Miltenberg whether the entire stretch along South Avenue’s west side between Elm and the alley was a loading zone (yes).

Richey told Rehnberg, “I don’t know if this is going to work out for you, Sara.”

She responded, “You got me. I did wrong. I live across from Irwin Park. I really can walk to town. I don’t need a car.”

“I’m sure justice will be served,” she said. “I hope to not bother you again in the future.”