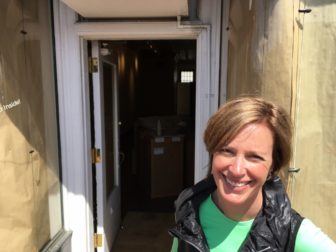 The guiding principle of the shop at 147 Elm St., called ‘Found,’ is “mixing old with new,” owner Christine Keane said.

“It’s always been my dream to own my own business and I’ve always done antiquing and loved that and showing people how to mix old with new,” she said midday Thursday as boxes of the accent pieces that will form the core of her retail business arrived as the cozy shop. “I’ve done that on the side, so I just decided: Why not? Now’s the time.”

A native of Morris County in northern New Jersey who earned a bachelor’s degree in marketing from Providence College, Keane said she has “always been in the design industry.”

“I used to be a designer in the fashion industry and also in the home industry,” she said.

New Canaanites shoppers can expect to find accent furniture, small pieces, chairs, mirrors, art and coffee table books, as well as accessories such as jewelry and handbags at the shop.

Asked why New Canaan was a good fit for her concept, Keane said: “I think the clientele, and also I feel the street doesn’t have a lot of home décor—I’m not modern, I’m more traditional with a twist.”

Found launches in a space that’s been vacant since January, formerly occupied by sportswear shop Gabby.

Tucker Murphy, executive director of the New Canaan Chamber of Commerce said that Found is one of a few that are opening on Elm Street in the next month to six weeks.

“It’s a good time of year to open up,” Murphy said. “I think Found will complement the wide array of stores we have here and we’re looking forward to working with Christine.”

Keane said she’s feeling nervous as well as excited, and hopes to open before June 1.