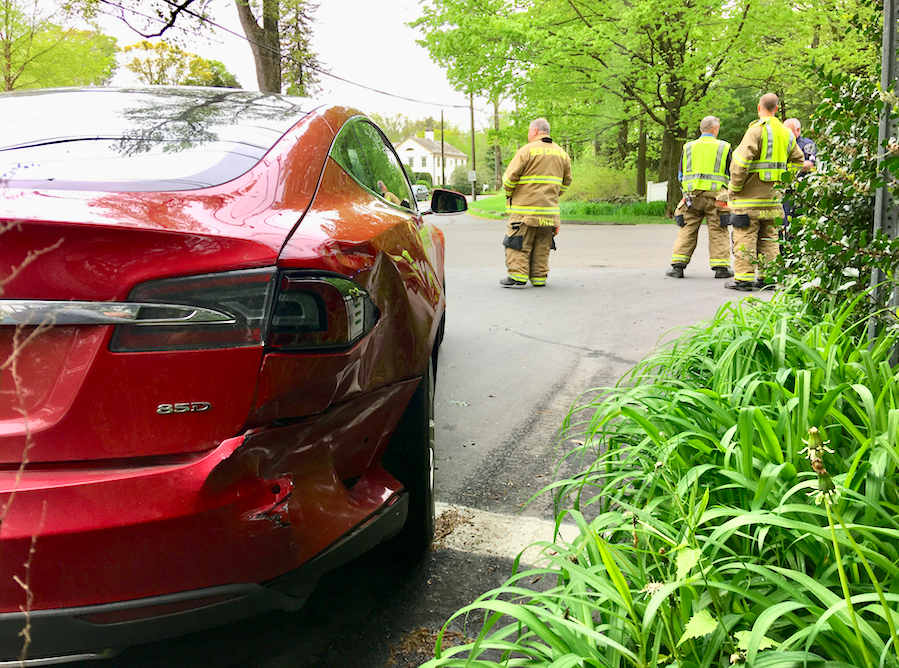 A look at the damaged passenger-side rear-end of the Tesla that was struck May 14, 2019 as its driver tried to cross Route 123 eastbound on Michigan Road in front of a pool service vehicles. Credit: Michael Dinan

Two men were transported to the emergency room Tuesday morning following a two-vehicle crash at Smith Ridge and Michigan Roads. 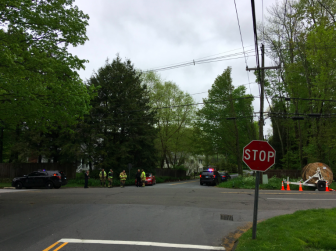 The driver was crossing 123 in the direction shown here, eastbound on Michigan Road. Credit: Michael Dinan

A woman driving a Tesla 85D eastbound on Michigan Road around 9:30 a.m. tried to cross Route 123 and ended up being struck by a pool service vehicle traveling northbound on the state road, according to officials at the scene, citing information supplied by the motorists.

Two of the men in the pool service vehicle were taken to Norwalk Hospital, officials said. The truck itself was found to have a registration that had expired three years ago, officials said.

The woman involved in the accident had a young son in the car, officials said. It had New York state plates.

Police and firefighters were on scene, directing traffic around the accident. Some debris from the cars involved could be seen in the roadway.

It wasn’t immediately clear whether police would issue infractions or make arrests related to the crash.

The intersection appears to see car crashes with some frequency, including as recently as February, when three people involved in a two-car crash were taken to the hospital.