An unwelcome change to parking on Elm Street in New Canaan has materialized in the form of thin strips of white paint. 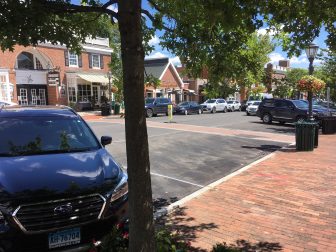 Under the “new” parking plan for Elm Street, this entire area above the crosswalk at Bank of America will be “no parking.” Credit: Michael Dinan

Though the permanent striping on New Canaan’s main business road is yet to come, public works officials have drawn the outline of a new parking arrangement over the recently repaved Elm Street that will see it lose 15 spaces.

Prompted by a resident formally putting New Canaan on notice that the town was out of compliance with a little-known (and variously observed) state law that calls for a 25-foot buffer zone between a crosswalk and legal parking space—a notification that could open up the municipality to liability in the event of a collision—officials studied the parking plan on Elm Street and, reluctantly, approved revisions that respect the statute. 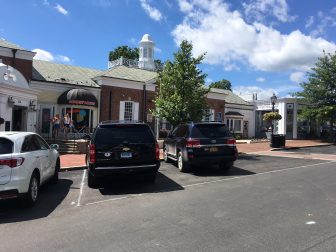 Neither of these cars, it appears, will be able to park where they do here once the change is made. Credit: Michael Dinan

Last week, residents got their first look at the new “no parking” zones based on outlines in the asphalt, and the change is dramatic.

It also means downtown New Canaan, always struggling to accommodate demand for parking between workers and visitors, soon will be squeezed even tighter.

Laura Budd of the New Canaan Chamber of Commerce said the change makes it that much more urgent and necessary for those who work in both first- and second-floor businesses on Main and Elm to park in municipal lots. 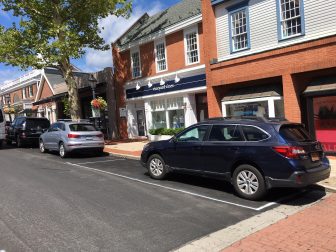 The area at South and Elm is hit worst of all because there are two crosswalks near each other there. The soon-to-be “no parking” zone is clearly visible in the asphalt here. Credit: Michael Dinan

“In this retail environment, we all need to be good neighbors, and the Parking Department is available to discuss other options in town,” she added.

New Canaan long has struggled to encourage Realtors, service providers, retail shop and restaurant employees and others who work downtown to leave the free (now two-hour) parking spots on Main and Elm Streets for prospective shoppers and diners. Permits for the Center School Lot off of Maple Street cost $150 per year, and the town even created a special new permit for Morse Court and Park Street Lots, at $438 annually, for those who are employed at downtown businesses.

First Selectman Kevin said the town is issuing more of those permits now to accommodate demand, and that the Parking Bureau also could soon start allowing people to pay in installments for such permits instead of in a lump sum.

Elm Street is bisected by five crosswalks, counting those at Main and Park Streets. The town is losing 13 spaces due to its observance of the 25-foot law, and another two after making the parking stalls six inches wider.