After hearing from residents across a wide swath of the town as well as an advisor who described implications for New Canaan’s financial picture, officials on Tuesday night unanimously supported the proposed $18.6 million renovation and expansion at Saxe Middle School.

Board of Finance members voted 8-0 in favor of the proposal, formally recommending a bond issuance to the Town Council to pay for it.

The vote received applause from an estimated 150-plus people who packed into the Town Meeting Room for the finance board’s meeting, and marks the clearing of what’s been seen as the critical hurdle in a project that has galvanized parents of school-aged kids and others.

The Town Council is expected to give the project its formal final approval on Nov. 19. Under a timeline proposed by the Saxe Building Committee, work would start next June and finish by the start of the 2017-18 school year.

It includes the renovation of the 58-year-old auditorium at Saxe, which closed last December after officials found PCBs in its paint, as well as a “right-sizing” of music rooms that a building committee immediately identified as a need, and a 12-room addition that emerged a few months later to address rapidly rising enrollment at the chronically overcrowded middle school.

“I think there is really just one fundamental question at issue,” said 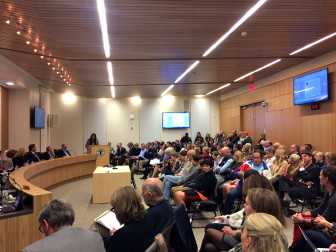 A standing room-only crowd of more than 150 people packed into the Town Meeting Room for the Nov. 10, 2015 Board of Finance meeting. The main agenda item was the proposed expansion of Saxe Middle School. Credit: Michael Dinan

, a mother to a Saxe seventh-grader and two younger kids.

“Whether or not we as a town are willing to accept the following: that our children are being taught in classrooms that are oversized by number of students, our children are being taught in converted closets and finally—and I cannot believe I am saying this in New Canaan—some of our children are being taught in hallways. Are you willing to accept that? Because I am not, and you shouldn’t be either. I have to give kudos to the Saxe administration, the faculty and truly, the students. Because they have done an amazing job keeping Saxe at a level of educational excellence and continually achieving. But just because they can do that doesn’t mean they should, and we shouldn’t be asking them to do that. We need to do what is right for our kids and do this now, before it’s too late, because we are not going to be able to maintain this forever, and they won’t be either.”

Though one lifelong New Canaanite and parent of young children urged what he called a more studied approach to the problem of overcrowding at Saxe, including the possibility of moving the fifth grade back to elementary schools, overwhelmingly those who took to the podium during a public comment period at the meeting spoke in favor of the renovation and build-out.

Several speakers implored the finance board to consider that New Canaan’s reputable and highly rated public schools are a major draw for those who pay a premium to reside here. Many also thanked Board of Finance members for their volunteerism and time.

About one month ago, several finance board members stirred wide discussion by saying that New Canaan would need to make hard decisions on capitalizing major projects if the full Saxe expansion was approved.

Working on financial assumptions supplied by the town, Bill Lindsay of Madison-based Independent Bond & Investment Consultants LLC, presented a conservative analysis on how debt, mill rate and taxes could be impacted by projects including Saxe over five to 10 years. In Lindsay’s analysis, it was assumed those projects would total $78 million and include $5.4 million projects already approved, $18.6 million at Saxe, $24 million for other capital projects, $15 million at the wastewater treatment plant and $15 million for roads maintenance. According to Lindsay, the town’s indebtedness would increase from $123 million at the end of the last fiscal year to $143 million at the end of FY19, then decline to $126 million in FY21.

“It is going to peak in the near term, but when you get out five years, it will be comparable to the level the town is currently enjoying, and will open up opportunities for future capital projects at that time,” Lindsay said.

He also reviewed a credit agency’s methodology for determining how towns achieve AAA bond ratings, spotlighting the many reasons why New Canaan falls into that category and remains on track to do so in the future.

Exercising caution, finance board members pressed Lindsay on the assumptions behind his analysis, suggesting that underlying causes—mostly to do with operating expenses, rather than capital debut—would need to be addressed in order to avoid high tax increases for residents.

According to Lindsay’s analysis, New Canaan’s existing debt service is set to drop off significantly over the next 10 years. Isolating the Saxe project specifically, based on a median property assessment from the October 2014 Grand List of about $1,024,000, New Canaan taxpayers would pay about $189 in addition property taxes during a peak year in 2017-18, going down to about $153 by 2025-26.

Finance board members asked Saxe Building Committee Chairman Penny Rashin, fellow building committee member Jim Beall and professionals hired to help oversee and carry out the project about construction contingencies (they come to about $3.2 million, all in), as well as about the former, smaller option to do just the auditorium and music space (that plan has not been developed and so it isn’t ready approval now), whether discovery of pollutants could increase costs (it’s already been factored in) and enrollment projections (this project would expand Saxe adequately for the foreseeable future).

First Selectman Rob Mallozzi, who by Town Charter serves as chairman of the Board of Finance, said later in the meeting that it was good for residents who attended the meeting to see how the group works.

“I think they probably have a better impression of what we do,” Mallozzi said. “I don’t know that anyone had their minds made up before or after, but we need to see the data and debt scenarios to make a good decision. In the end, it was a really good healthy exercise, having the turnout that we did, having people understand that if we shot from the hip that all of us would just jump right ahead with the schools. There is no question. But this is a deliberative body, we need to understand what is the impact for the town. You did, and you came up with the right answer and now we move on. And I think we all feel really good about it.”

2 thoughts on “‘We All Feel Really Good About It’: Finance Board Votes 8-0 In Favor of Full Saxe Building Project”