Just a few months after closing New Canaan’s only Indian restaurant, a popular chef who had been serving up high-quality food for nearly 20 years here said that he’s reopening in the same space. 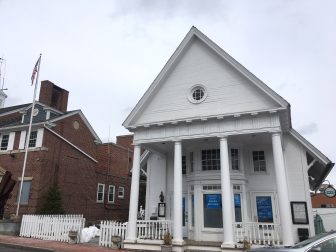 Prasad Chirnomula, owner of ‘India’ and ‘Thali’ in New Canaan in the past, is opening ‘Chef Prasad’ at 62 Main St. It’s on track for an early-April launch. Credit: Michael Dinan

Prasad Chirnomula said the new restaurant, to be called ‘Chef Prasad,’ will open in the first week of April following an extensive interior renovation.

Chirnomula in December closed five restaurants he owned, including India at 62 Main St., because the large operation “basically was not financially viable any longer.”

Now, with a renegotiated lease and a new backer—his own father, Venkat—Chirnomula said he is eager to reopen in New Canaan and focus solely on that restaurant.

He added: “I think my name resonates pretty well in town and like the town so thanks to my dad for stepping in to help.”

India had been open for nearly two years, serving classic Indian cuisine and signature dishes. Before that, Chirnomula had run Thali out of the “bank building” at 87 Main St. for 16 years, until it closed in late-2015. A few months later—the day after Boulevard 18 closed up the street, next to the firehouse—he announced that India would open there in the spring.

In its intimate dining room, India offered classic items such as Tandoori Chicken and Tikka Masala, as well as Chirnomula’s signature Turmeric and Spice Marinated Fish, Belize King Prawns and Pan Grilled Rack of Lamb. Beer-lovers came to India for its expansive list.

The new permanent menu will include those dishes though it will be smaller, with daily specials that sample different regions of India.

“In the past sometimes my talents, my vision of this food sometimes goes beyond what people expect but I don’t want to put it all in one menu,” Chirnomula said.

Asked why he is choosing to reopen in New Canaan, Chirnomula noted that he has strong ties here—an “extended family” of friends, and this is also where he met his wife—and added: “New Canaan is a well-traveled, educated clientele. That is one of the reasons that back in ‘90s when I looked at the town I said, ‘This is the right town for this kind of food.’ And over so many years, 20 years, it worked very well. Yes, there are more restaurants today but I think Indian food is missing in town.”

The new restaurant will accommodate what Chirnomula described as a growing demand for a to-go and pick-up business, and ‘Chef Prasad’ also will have a new look.

“I think the town is elegant so the restaurant will look a little different going forward, it will be more of a northern India look—more luxurious, more pillows, more lighter fabrics and entirely redone, more soothing and comfortable to spent an extended period of time,” he said.