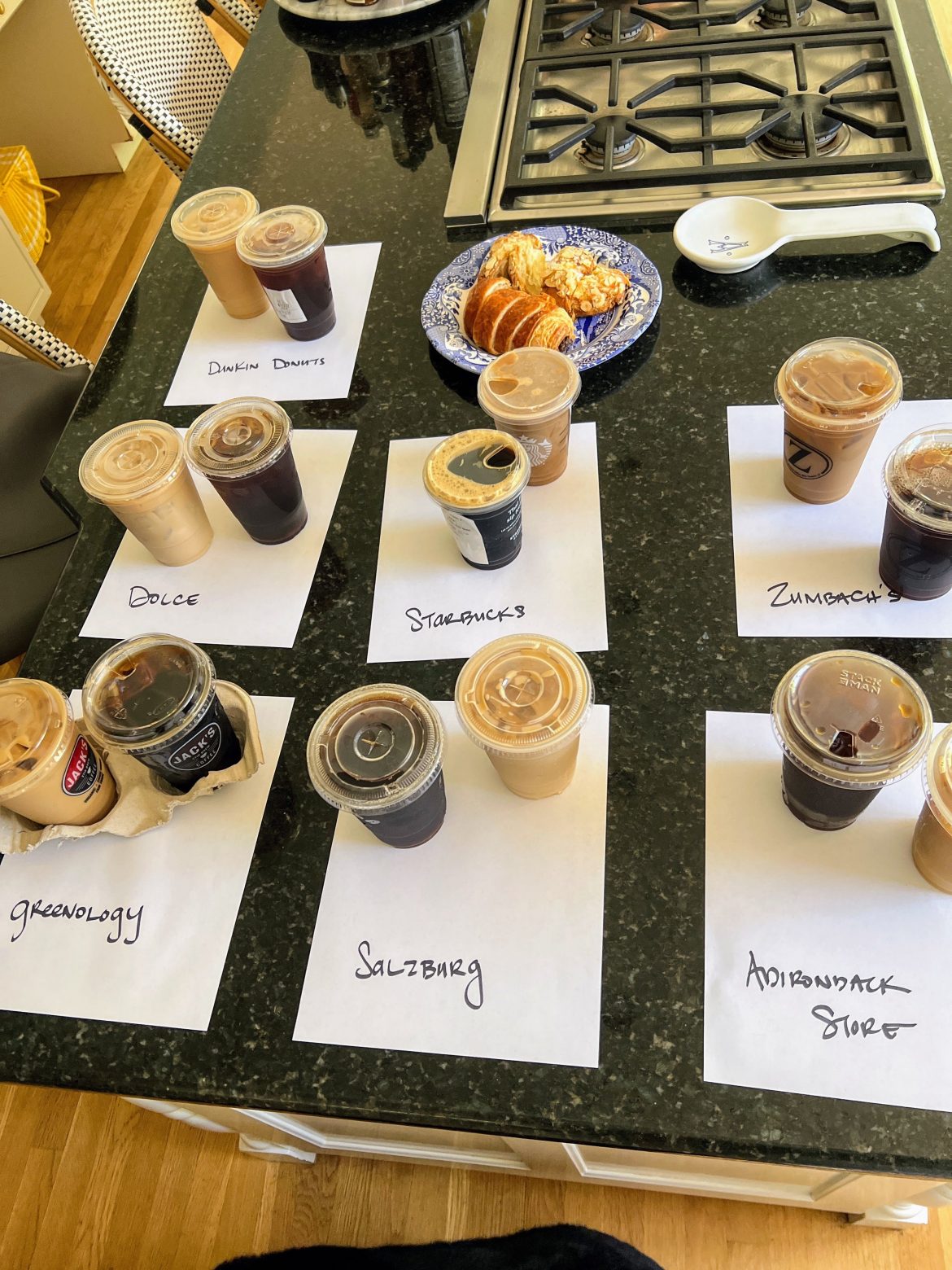 Is it too hot for opinions this week? Because I have one.

Everyone can openly adopt precisely one form of snobbery. You can be a wine aficionado, an ardent collector of vinyl, or an art-house cinephile, but combine all three into one personality, and you’d best tread lightly. Self-identify as a “foodie” in addition, and I will gnaw my own arm off to avoid sitting next to you at a dinner party. I once worked with a guy who, as an admitted “water snob,”  only drank Evian, saying he preferred its “mouthfeel.” Motivated by the sheer horror of that word, I made a point of lavishly filling my water glass from the work kitchen faucet in his presence from that point on.

I’m no coffee snob. I have never told a barista a specific temperature at which my latté should be served, and I have no plans to utter the word “cortado” aloud to another human being as long as I live. In a recent group text among friends about Dunkin Donuts’ proposed move to the corner of Elm and South, which we all generally support, I chose a pretty specific, unsnobby sword to fall on: “Dunkin Donuts has the best iced coffee, anyhow,” I text-declared, because nobody actually speaks in person anymore.

The reply came swiftly: “for your next column, maybe we should do a taste test of town iced coffees. I VOLUNTEER.”

Thus, the following Who Knew was born. Many thanks to my friend Hilary Ormond for the idea and the tasting help behind this column. Her credentials for this line of research are legit: she drinks iced coffee year-round, she drinks it black, and she’s (thankfully) not a coffee snob. In my kitchen, we conducted a seven-way, non-blind taste test of New Canaan iced coffees. If you’re searching for a better to-go cup, or you’re the brave Sidewalk Sale-faring sort in need of immediate revival, I hope you’ll find our research useful.

We each tried one small iced coffee from each shop. Hilary’s were black, mine served with oat milk, if available, half and half if not, and a Splenda. Yes, I know Splenda is gross and made out of used swimming pool water, but Stevia is an affront to humanity. 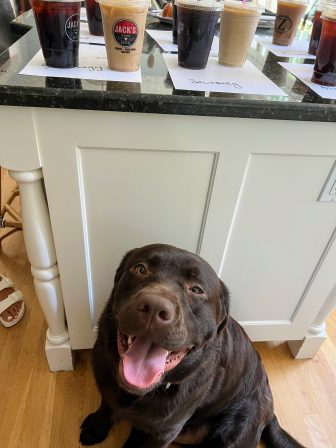 N.B.: If you were one of the several people who thought you were about to score a parking spot on Elm on Tuesday morning, only to see someone put two iced coffees in a cooler in her car, then walk off to buy more iced coffees somewhere else, I’m sorry.

In alphabetical order, the results:

There’s so much to say about the Adirondack Store’s considered cabin aesthetic and dreamy assortment of decor and gifts; it deserves a column all its own. If you don’t already buy your Pendleton blanket dog beds here (wait, am I a Dog Bed Snob?), please, just go now. The Tall Pine Bar, their coffee-shop-within-a-shop, is open during store hours to furnish Elm Street shoppers with a year-round space to set down their bags and refill the tank.

The coffee: we found it sharp, with an acidic bite that didn’t quickly retreat. Tempered with oat milk, I liked the nutty base (Tall Pine Bar brews Brooklyn-based Sey Coffee) and found that it drank like many fancy New York iced coffees: assertive flavor that’s great for a quick pick-me-up, but I wouldn’t want a gallon of it.

The vibe: Super-friendly, as I’ve found every visit to this store to be. I’d choose it for a calm, quiet working spot and welcome the visual distractions (antique owl lamps! Cire Trudon candles! Handmade Czech glassware!) that await me there.

Dolce, as Hilary pointed out, is a place New Canaan never knew it needed. My own Dolce love affair began in August 2020. It was early in the pandemic, and our house was without power following a freak storm that had also dropped a 120-year-old hickory tree on our roof. For six mornings in a row, my husband and I rolled up to Dolce for a Portuguese muffin egg sandwich (highly recommended!) and WiFi to check our email and begin the workday. They provided the break from the chaos and cheerful morning vibes we needed to survive.

The coffee: Smooth drinking, with clear, bright notes, but not too strident. To my co-taster, it felt like a “good summer brew.” They brew Italian espresso stalwart Caffé 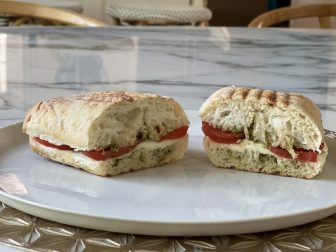 Vergnano, and it carries that Italian roast depth that can handle some half and half.

The vibe: friendly and organized. Dolce gets lively, especially outside, but it never seems chaotic. I spotted a traffic cop on the beat chatting with a family out front, and inside, tables of ladies caught up amid the bookshelves.

I’m sure some folks out there feel that New Canaan is an elite community of rarefied aesthetic value that must traffic only in chic, bespoke coffee houses. But the truth is, Dunkin Donuts does a very brisk business here, as they do most everywhere on the east coast, for good reason: they make a reliably good cup of coffee that most anyone can afford to drink daily. This is one case where I don’t want a chain to be outcompeted by an indie artisan with a man bun: we need our Dunkees.

The coffee: The exact kind of iced coffee you want in your cupholder for a three-hour journey on I-95. This is accessible iced coffee, a solid cup of medium roast that can withstand the ice melt without that disorienting “why am I drinking spiky water” feeling.  “Dependable and smooth,” read our tasting notes. “Won’t make you jittery.”

The vibe: I conducted a thorough search but did not spot Casey Affleck. However, every seat, both inside and out, was filled on a Tuesday at 9:30 AM. There was a line, but the team was cheerful, quick, and kind. I didn’t ask what kinds of beans they were brewing because who does that in a donut shop?

Our town’s vegan joint has a widely varied menu that could easily sustain you for three meals a week without ever trying the same item twice. I’ve never thought of Greenology in the same league as Zumbach’s or Starbucks for to-go coffee, but when I saw a Jack’s Stir Brew sign in the window, I became intrigued.

The coffee: Jack’s Stir Brew makes an excellent all-around cup of iced coffee. Smooth and balanced, this cold brew is both intensely drinkable and satisfyingly respectful of coffee’s actual flavor. It’s accessible to anyone, but coffee purists will love it, and both with and without oat milk, it stood out.

The vibe: Energetic and light-filled, with seating to spare. I spotted some Gen Z folks gathering post-workout, presumably to change the world, and this being New Canaan, a lady was speaking very loudly on her cellphone, too. The team behind the counter is capital C Cheerful.

Patisserie Salzburg feels like it’s been here for 50 years, even though their New Canaan outpost only opened in 2020. The menu offers multitudes, but the real draw here is the pastry case. Come here for your classic Viennoiserie cravings: apple tarts, Opéra cake, macarons, and Linzer tarts. For your spouse’s birthday, consider this pro move and pre-order their red velvet cake. Rumor has, it’s transcendent.

The coffee: Notably musky and masculine, they brew beloved espresso megabrand Illy to accompany all that sweet pastry. Mine got buried in a heavy half and half pour, but when I tried it black, it was deeper, nuttier, and not for novices.

The vibe: Wedding-cake-pink and family-friendly, with shaded outdoor seating. It’s the kind of place where you’ll see three generations sharing a slice of carrot cake, a testament to the binding powers of sugar.

Love it, hate it, or passively accept that it’s seeped into every last fiber of modern American society; Starbucks is the reason we have opinions about coffee. And while it served as the architect behind America’s multi-decade latté and, ugh, Frappuccino obsession, Starbucks has been a surprising laggard in the world of cold brew coffee. For ages, their iced coffee options were all espresso-based, and reviews were mixed. Ten years ago, if it were a 100-degree day at the Cincinnati airport, I’d visit Starbucks for an Iced Americano. Under any other conditions, I’ll pick almost anything else.

Starbucks has since addressed that white space on their menu boards, with a whopping 36 cold coffee options available on their app, including iced, shaken espresso, several flavors of sweetened, iced cold brew, and something called a Nitro Cold Brew which I purchased out of sheer decision fatigue. 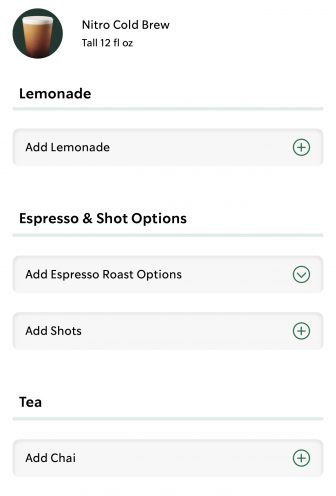 This screen gave me choice paralysis.

The coffee: There was a deep, rich flavor, but the first rule of Nitro Cold Brew is, apparently, that there shall not be ice in a Nitro Cold Brew. I’m deducing now that “Nitro” means the cold brew is served from a nitrogen-powered keg tap, giving it a Guinness-like earthiness and an ombré of tiny, cascading bubbles. It was smooth and powerful, by all accounts, not bad. But still… no ice? Is “ice” something I need to select in the app? Why is “add lemonade” the first option? Do these people care nothing for my tooth enamel? What’s going on here?

The vibe: I’ve got to say, New Canaan Starbucks has a winning combination of shaded, terraced outdoor seating and advanced people-watching opportunities. The team who work there are preternaturally buoyant and friendly. Word on the street is that talk show host and former mayor of actual Cincinnati Jerry Springer has been frequenting it lately, but he wasn’t spotted Tuesday. Maybe he heard about Zumbach’s.

I don’t need to sell you on Zumbach’s. Cheerful, apple-cheeked college students slinging site-roasted coffee beans do a far better job of it than I ever could, and I’ve spotted Zumbach’s Z stickers on cars as far away as Maine. They’re our hometown institution, and everyone from the local police to stroller moms will drop in for a daily fix.

The coffee: I thought I knew about Zumbach’s coffee, but I didn’t know how good it was on ice. This cup was mellow and nutty and, with oat milk and sweetener, struck the right balance between accessible, drinkable, cold coffee for a scorching hot July day and coffee that a real-life coffee snob could endorse. Not that I know any.

The vibe: Our very own Central Perk, Zumbach’s feels ad hoc and informal. Find your college pennant on the ceiling, and you’ll get the feeling that you belong here, too.

And the winners are:

Jack’s Cold Brew from Greenology. If parking on Main were a more straightforward proposition, I’d make a daily run for this iced coffee. We both loved that they brewed it with cold, filtered water to give it a depth of flavor without spiking the acidity, and it was phenomenal both with and without oat milk. 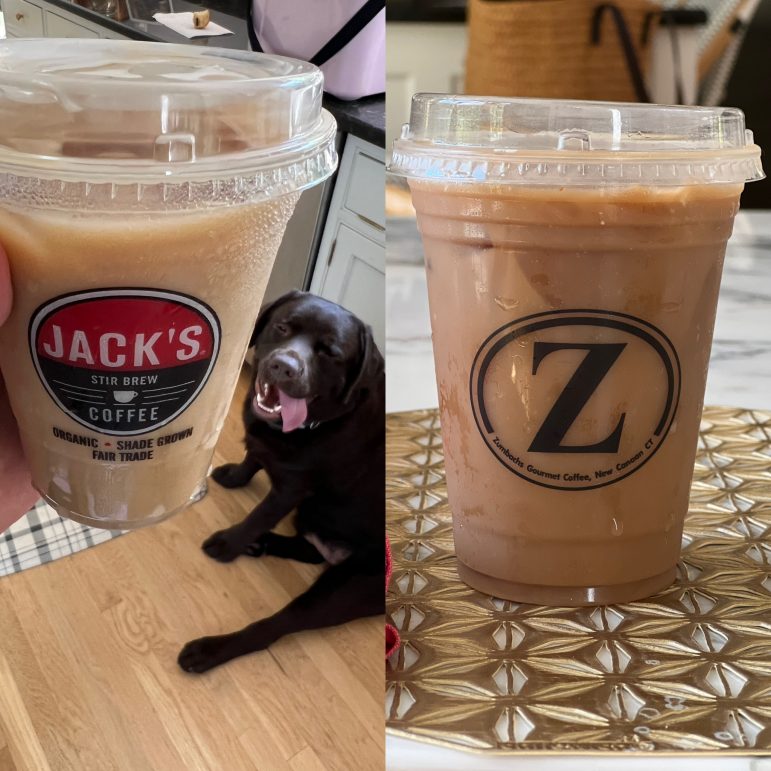 13 thoughts on “Who Knew? New Canaan on Ice”