The Zoning Board of Appeals on Monday approved two variances allowing for the construction of a two-family home at 72 East Ave.—however, the project still needs approval from the Planning & Zoning Commission in order to move forward. 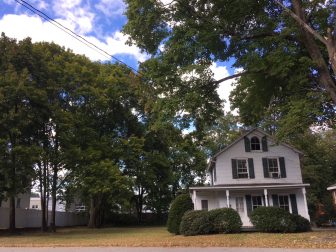 William Panella plans to raze an existing 1,400-square-foot home on the property, where his late mother Mary had lived, and remove a non-compliant detached garage in the rear in order to build a new, residential style, two-family dwelling measuring about 4,000 square feet.

However, in order to get a special permit for the project he needed relief from a requirement that the property have a minimum of 100 feet of frontage (it has only 93 feet) and that the site allow for a conceptual 100-foot diameter “circle” of open area where there is no building footprint (the “circle” is just short at 97 feet) —both of which were granted at the ZBA meeting.

The application was continued from the board’s October meeting after some board members expressed concerns over the driveway shown in a preliminary site plan.

Pannella is also involved in the development of the commercial property on Vitti Street, along with partner Art Collins.

During the October meeting, Pannella’s land use attorney, David Rucci of Lampert Williams & Toohey LLC, explained that the goal in connecting the driveway to the parking lot on the adjacent property was to help meet the desire of the Planning & Zoning Commission to “create connections” between the properties in the new Business B zone downtown—such as shared pedestrian walkways, driveways, courtyards and other public open spaces that connect properties together to create a feel of continuity.

Although the property at 72 East Ave. is, in fact, in the Residential B zone, Rucci said the commission has expressed a desire to see some connection made between the properties.

Several ZBA members, however, expressed concern about having the driveway connect at the rear of the property. Member Laura Edmonds said she felt that having a driveway and adjacent pedestrian access way shared by two properties was a potential “hazard,” particularly because the driveway would partly run underneath the raised apartment building to be constructed at 23 Vitti St.

During Monday’s meeting, Rucci presented a revised plan, this time without the driveway accessing the property to the rear.

However, the revised plan showed about five parking spaces in the parking lot for 23 Vitti St. overlapping the rear property line at 72 East Ave.—a new element which some board members frowned upon.

ZBA member Angelo Ziotas, seeming somewhat bewildered as to why the parking spaces had been added, reiterated a point he made during the October meeting, which is that “we can only make our decision based on the plan that is presented.” He said even if, as Rucci asserted, the driveway and parking spaces fall under the jurisdiction of P&Z, the ZBA can still reject a request if a plan includes elements it deems as noncompliant, unsafe or not in keeping with a neighborhood.

“The parking along the back makes the lot non-compliant,” Ziotas said. “You’re saying that if we don’t want that … that’s something that only P&Z can do?”

Rucci says “it’s more a site plan issue” that falls under the jurisdiction of P&Z, which regulates all special permits for multifamily developments in town.

“That’s just their issue, in terms of looking at the two-family itself,” Rucci said. “It’s hard, because I know when you sit on this board … everyone here knows the town, they know what the lots look like and they know what they want to see… but this is really a planning issue.”

He said the only way the application for a special permit can be submitted to P&Z is if the ZBA grants the needed variances first. However, some members, including Laura Edwards, again expressed concern that the board was being asked to grant a variance for a plan that could still change.

After considerable discussion, Rucci agreed to remove the parking spaces from the plan presented, shortly after which the board approved the request for variances unanimously.

Rucci pointed out that the property is actually being brought into compliance because the detached garage currently there is over the allowable setback.

In addition, he pointed out that there are several other multifamily homes on East Avenue near the subject property, thus, putting a two-family home there is in keeping with the neighborhood.