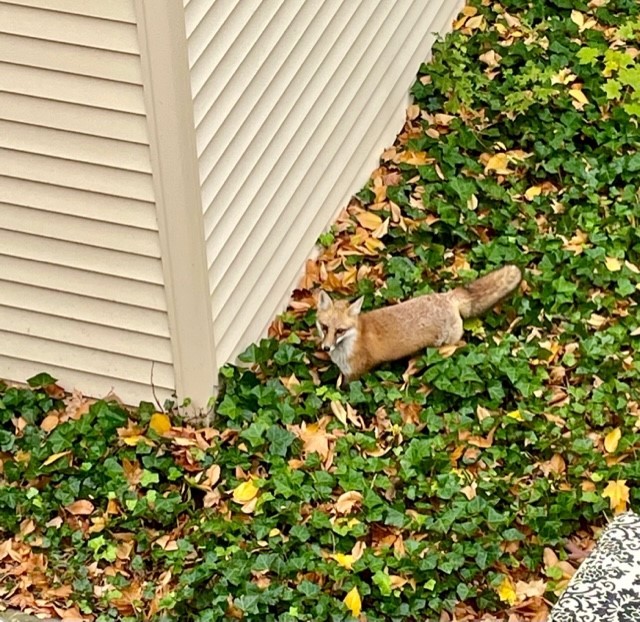 Photo of the fox seen in the area of Richmond Hill Road and Park Street. Published with permission from its owner

Officials say the town has received numerous reports in recent weeks of a “friendly” fox living in the area of Richmond Hill Road and Park Street, raising concerns about too much familiarity with the animal.

Officer Allyson Halm, head of the New Canaan Police Department’s Animal Control section, said she’s been told that “the fox shows little fear and has appeared to follow people, even those walking dogs.”

“In the photo the fox appears young, healthy and has good weight to it,” Halm said, referring to the image above. “The concern is that this fox is being fed regularly by someone which would explain the lack of fear towards humans and the weight this fox has. Wild animals that associate humans with food present a risk to all and most likely won’t end well for this fox.” 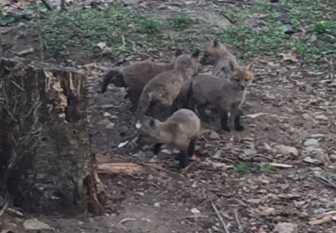 A total of eight fox kits were counted at a den at Lakeview Cemetery. This photo taken April 21, 2016, and published with permission from its owner

The town has seen an increasing number of foxes denning and living downtown, with known litters on Maple Street, Harrison Avenue and Lakeview Avenue. A large litter of fox kits born in Lakeview Cemetery made headlines in 2016. Three years ago, a fox appeared to have established a den on St. John Place, and the nonprofit organization Wildlife In Crisis has released rehabilitated foxes into New Canaan Land Trust properties.

According to the state Department of Energy and Environmental Protection, red foxes are “widespread and abundant” in Connecticut.

“Foxes also will eat vegetation, fruits, nuts, insects, carrion, and garbage,” according to DEEP. “Red foxes may partially bury, or cache, excess food, cover it with soil, grass, leaves, or snow, and mark it with urine.” 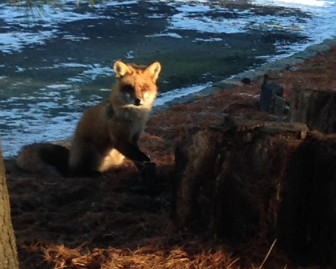 A red fox caught in a ‘leg-hold’ trap on a private Briscoe Road property on the morning of Jan. 13, 2016. Due to a neighbor’s intervention, the animal was set free by the hired trapper. Rosemary DeClue photo, published with her permission.

The species breeds from January through March and give birth after a gestation period of about 51 days.

“Red foxes may dig their own burrows but they usually improve an abandoned woodchuck burrow,” the DEEP said. “It also is common for foxes to den in the crawl space under decks and sheds. Most foxes have more than one den and will readily move their young if disturbed. The pups stay in the den until they are about four to five weeks of age, after which they emerge and begin to play outside the den entrance. Both adults care for the young by bringing food and guarding the den site. The pups are weaned at about 12 weeks and join the adults on hunting forays, learning to catch food on their own. The young disperse from the family unit in fall and will usually breed during their first winter.”