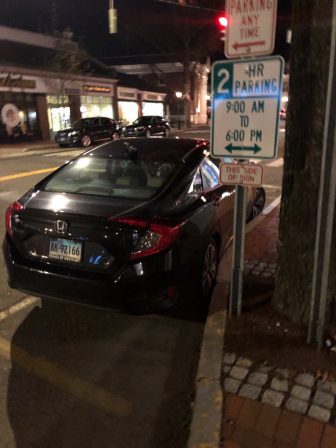 Mariann Funch said she came to New Canaan to shop on a Monday and parked on Elm Street. The Stamford resident told the Commission during her appeal hearing that she “put the space number into the machine and paid with three quarters, slowly, one at a time.” Funch went into the store for about 45 minutes and when she came back she had a ticket, she said during the hearing, held Nov. 7 in Town Hall.

Funch said after she discovered the ticket on her vehicle she went back to check the parking kiosk and noticed that there was three quarters in the refund slot, indicating that her transaction never went through.

“For some reason when I put the money in, it didn’t register… and I got a ticket,” she said.

Func replied, “No, I didn’t receive a stub.”

Funch would have “needed to press the green button” on the machine to complete the transaction, Miltenberg said. “Otherwise, that’s why the change drops.”

“Well, that’s my case,” Funch said. “I came here tonight because I did try to pay, but I got a ticket.”

Commissioner Peter Ogilvie asked whether Funch uses pay machines when she parks in her home city of Stamford.

“They do… but you put your driver’s license in… and you pay with a credit card,” Funch said.

“But I do pay with change with when I visit my son in Cambridge, [Mass.],” she added. “I just enter the parking space, put the quarters in the machine, and I walk away.”

The Commission later voted unanimously to uphold the $25 ticket, with Ogilvie saying, “I think she should get a ticket,” and Richie saying, “Yeah, I didn’t find her very convincing.”

Krystyna Romano of Norwalk said she came to New Canaan to see a dermatologist “to have a biopsy done” and parked in the Morse Court lot.

Romano paid for two hours, she said, “but when I put in my money, no receipt came out.”

Anxious about her appointment, she went in anyway. She said she was in the office for an hour but when she came out she had a ticket.

“I came out sad and worried because I had had a biopsy … and to find this ticket was very upsetting,” Romano told the Commissioners, later adding that her test results turned out OK.

“At the time her ticket was given, there was no payment made,” Miltenberg said. “According to her time frame, there was never a payment for Space 51 made.

“Possibly she paid for the wrong space but I can’t tell that from the back office,” Miltenberg added. “This is why we tell people to keep their receipts.”

Later the commission voted unanimously to uphold the ticket, with Richey saying, “Again, I personally didn’t find her very convincing.”

Cynthia Thunem of New Canaan said she parked on Cross Street “the opposite way, against the traffic… and I had no idea that was against the law in Connecticut.”

Thunem said that she grew up in Vermont where it is legal to park on the street in the opposite direction of traffic. However, she added that she has lived in New Canaan for the past 22 years.

“I wasn’t trying to sneak something in,” she said. “I honestly didn’t know.”

Thunem added, “I throw myself at your mercy. There was no reason I had to do that. I just had no idea that it was against the law.”

Commissioner Pamela Crum asked, “Have you parked that way here before?”

The Commission later voted unanimously to uphold the violation, with Richey saying that Cross Street “is not a little street – it is a pretty well travelled street,” and Crum saying, “Yes, and it is a state law that you don’t cross traffic [when parallel parking on the street].”

Jeremy Maco of New Canaan got two tickets for overtime parking after his vehicle became disabled on Cherry Street on a Sunday evening.

“I received two tickets on the same day,” Maco told the Commission. “It was a Monday. And I had left my car there actually on Sunday evening. I was driving to meet my family for dinner at a friend’s house, when I got a flat tire. And so I pulled over on Cherry Street right across from Tony’s Salon. I opened the trunk to find my spare – but there was a lock on it and I could not get it opened. I was late to meet my family, so I left.

“The next day I had to catch a 6:30 a.m. train into the city—and my wife also works full time – so neither of us was able to deal with it that day,” Maco added. “So I called AAA on Monday to have them come first thing Tuesday to tow the car and have the tire fixed.”

Maco said he provided to the town a receipt from AAA showing that he had the car towed first thing Tuesday morning.

The tickets were $25 for the first infraction and $40 for the second.

“I’m not disputing anything—it was a metered spot and it should have been paid,” Maco said.

Crum asked Maco why he didn’t call for a tow after dinner that Sunday night.

“After leaving dinner with my friends… I have a five year old and and eight year old… I had to get home for a school night on Sunday night,” Maco said.

Commissioner Chris Hering asked Miltenberg what the town’s policy is for disabled vehicles.

Miltenberg said if someone calls and explains that their vehicle is disabled, then the Parking Department will take note and not ticket the car.

Later in the meeting, the Commission voted 4-1, with Ogilvie opposed, to uphold the first violation for $25 and void the second one for $40.

Richey said although Maco was “the poor fellow that got a flat tire … all he had to do was call the town early Monday and explain why [the vehicle] was there.”

Richey added, “He also could have been more on it, calling the tow truck and having the car towed. I personally would have done that … it boggles my mind that he would leave the car sitting there 24 hours.”

Ogilvie said he would like to see both tickets upheld.

Richey pointed out that even if Maco had called the town on Monday to explain that the vehicle was disabled, “he still might have received one or two tickets.”

Hering said because Maco got a flat tire, which was beyond his control, he would “like to void the $40 [ticket] and uphold the $25 [ticket].”

Crum said she agreed with Ogilvie that “he should have called” for a tow on Sunday, but “by the same token it was a disabled vehicle.”

The commission voted 4-1 to uphold the first infraction, with Ogilvie voting against because wanted to uphold both tickets.