New Canaan Police are investigating a report of cash and jewelry missing from an Oenoke Ridge home, received at 10:11 a.m. on April 15.

The organizers of May Fair, scheduled for May 6 and 7, are calling for volunteers to help run the beloved community event on the St. Mark’s green—a fundraiser for charitable causes. Get info and sign up here. Here’s a recent podcast on May Fair, including some background, with co-chair David Shea.

A benefit for New Canaan Library featuring Mike Hayes, a former commanding officer with the U.S. Navy SEALs, is to be held at 6:30 p.m. on May 5 at the Country Club of New Canaan. Details here. Bankwell is lead sponsor of the event.

The Town Council sang happy birthday at the close of its regular meeting Wednesday to Chair Steve Karl. The lifelong New Canaanite, grandson of Rose Kelley Karl, said he was pleased to mark the occasion of his 60th year in New Canaan.

Book it: Live music at The Powerhouse Performing Arts Center in Waveny, 7 p.m. on Saturday, May 21. The first installment of the Powerhouse series features Julia Jewel, a recent New Canaan High School and Berklee College of Music graduate. Details here.

Police are investigating a vandalism report received at 3:36 p.m. on April 11 about a car on East Hills Drive that had been keyed overnight while parked in a driveway.

Two days after Catherine Palmer was arrested in a domestic incident at 151 Butler Lane—she’s already on probation for animal cruelty after three puppies died there—state Superior Court received a complaint from her saying she’s seeking to evict a second-floor, front bedroom tenant at the house. The complaint itself is dated April 7. The tenant has lived there since last August, the complaint said, and the month-to-month lease “has terminated by lapse of time.”

Those seeking a volunteer opportunity to help clean up New Canaan can pop into First Presbyterian Church starting April 24 and in the foyer  collect an Earth Day T-Shirt and trash bag. Volunteers will collect trash from town streets and parks during Earth Month, and highlighting the best photos of the effort.

Some news on the Steve Benko Pool at Waveny: The pool’s cover was scheduled to come off on Tuesday, according to Interim Parks & Recreation Director John Howe. The Board of Selectmen at its regular meeting this week approved a $3,000 contract with Stamford-based Signs of Success Inc. to create 15 signs for Waveny including two pointing to the Steve Benko Pool.

Police at 12:32 p.m. on April 16 received a report of a road rage incident at Main and Elm Streets, with two motorists engaging in a verbal confrontation while remaining in their vehicles. 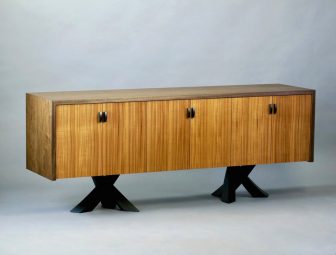 Laguna Credenza in walnut and koa, by Tom Throop of Black Creek Designs on Hope Street

Congratulations to New Canaan furniture designer maker Tom Throop of Black Creek Designs on Grove Street—a 1982 New Canaan High School graduate—on being selected to exhibit his furniture at the Smithsonian Craft Show. Regarded as the most prestigious juried craft exhibition in the country, the Smithsonian runs April 21 to 24 at the National Building Museum in Washington, D.C. Throop will have a number of pieces on display, including his Laguna Credenza in walnut and koa, pictured.

Police are investigating an extortion complaint lodged at 5:19 p.m. on April 14 by a Bittersweet Lane resident regarding an online scam requesting money.

Name a chair in the new Jim & Dede Bartlett Auditorium at New Canaan Library—details of The Chair Project can be found here.

The Town Council on April 5 approved a Total Expenditure Budget of $161.58 million for fiscal year 2022-23, representing an increase of 4.58% over the current fiscal year’s expenditure budget of $154.51 million, officials said.

First Selectman Kevin Moynihan was back in Town Hall on Wednesday, attending a meeting of the Town Council that night and providing an regular update to the legislative body. He had suffered a stroke on Easter. 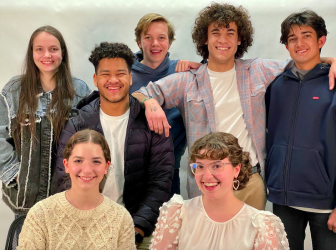 Congratulations to NCHS seniors Eliana Bukai, Natalie Frank, Richard Hernandez, Faith Hibbert, Jack Marshall, Sumner Pellegrini DePaur, Larson Riccoboni, Alexandra Schauer, William Stallings, Estella Trygg and Luke Tullier on having their creations featured in “re-stART,” the 35th annual Senior Art Show. “re-stART”, marks a very special experience for a group of New Canaan High School seniors. Each student will have their artwork on display in the NCHS High School Art Gallery. There’s an opening reception April 28. The Senior Art Show allows students to generate a one-person exhibit that is entirely their own creation—responsibilities include creating a themed title and poster/logo for the exhibit, planning and creating the exhibit, generating publicity, and selecting, curating and hanging their work for the show. The show’s student coordinators were Trygg and Riccoboni, Frank and Pellegrini DePaur both contributed to the poster/logo design, and Marshall, Tullier, together with NCHS Film students, created the exhibition videos. Advising students on the planning and organizing of the event were their art teachers Kimanne Core, Jennifer Sinski, and Maggie Pennoyer.

A bulletin from the Registrar of Voters: May 9 is the deadline for enrolled voters to transfer from one party to the other in order to vote in a State, District or Municipal office primary of a new party. Primaries this year will be held 6 a.m. to 8 p.m. on Tuesday, Aug. 9.